Saturday, per my recent policy to find locations for weekend walks or hikes that we’ve never been to, I found something called the Montclair Railroad trail, shown on the map here (click to enlarge): 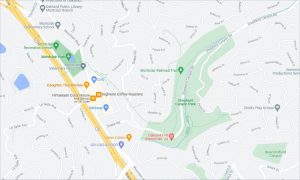 The yellow lines are Highway 13, two lanes in each direction, than runs from I-580 in the south to Route 24 in the north, and sits in a natural valley — actually an earthquake fault zone — dividing the Oakland Hills to the right, with the lower Oakland Hills and the city of Piedmont on the left.

In the left of the map is Montclair Village, a charming shopping district about two blocks wide and five blocks long, paralleling Highway 13, that serves the entire area east and west. It’s where we go grocery shopping, get take-out Mexican and Italian, visit the Sunday morning Farmers’ Market (well, when we still went to farmers’ markets), and take the cats to the vet as needed. It has one large parking garage, in the backside of the block where CVS is. When I’ve parked there, I’ve long noticed that some kind of walking and biking path runs behind that garage along the slope above the village, in the green zone between the business district and the residential streets on the hillsides above.

Turns out it’s the Montclair Railroad Trail, a paved path that runs in the right-of-way where a real, actual railroad once ran. It even has its own website — Montclair Railroad Trail. It runs, on the map, from behind the village to the southeast, then bends to the northeast along the side of Shepherd Canyon, through the green area of the canyon, until it joins a road in the developed residential area of the Oakland Hills.

The website, and some trailside signs along the way, provide some fascinating history. The railroad was built in the early 20th century, and really did go up Shepherd Canyon, then into a bore through the Oakland Hills, and came out on the other side in Moraga and Walnut Creek and then all the way to Sacramento. It was abandoned in the 1940s and ’50s as car culture took over. Some interesting photos on the site.

We thought to park at the Fire Station along Shepherd Canyon Road, in the utility parking lot across the street, but most of it was blocked off with “No Parking” signs and the few spots were taken. So we drove up a bit to the gravel parking lot for Shepherd Canyon Park, where boys were practicing soccer in Escher Field, then walked back to the fire station area, where an angled trail takes you up the hill to the level of the railroad trail proper. From there we turned left and walked to the village.

It’s a pleasant paved trail with a fair amount of traffic, hikers in pairs and old ladies walking their dogs. An arced foot bridge goes over Snake Road, a bridge we’ve driven under many times going up and down into the Oakland Hills. From the end we looked down into the village, then turned back, returning to our car the same way we came. The railroad trail, from the map, goes on at least the same distance again. So when we left to drive home, we went north specifically to see if there was any parking at the north end of the trail. There is, maybe four car spaces worth, where Paso Robles Dr turns off of Shepherd Canyon Rd. Next time we’ll start from there.

Another aspect of the history of the canyon is that, after the railroad was abandoned, the highway department planned a *freeway* through the canyon, via a cloverleaf interchange at Route 13 and Park Blvd, and then presumably through an even bigger tunnel through the hills. It never got built.

Of course, we moderns always sigh in relief that such projects weren’t built, so that the relatively rural areas *we’ve* lived with all our lives were not ruined. But residents of the areas where such project *were* built 50 or 70 years ago — such as the complete Interstate Highway system, and of course Route 13 itself — probably felt the same way, and they lost.