There’s a graphic meme going around on Facebook — no, of *course* I can’t find it now, or a link to it — that compares America’s possible future as being Star Trek’s or The Handmaid’s Tale‘s.

I think for a while, from the 1960s when Trek began, maybe up through the ’90s, it was possible to believe we — the entire human race — was on a path toward the Trek future. Since then, we’re going the other way. Further comments at the end. 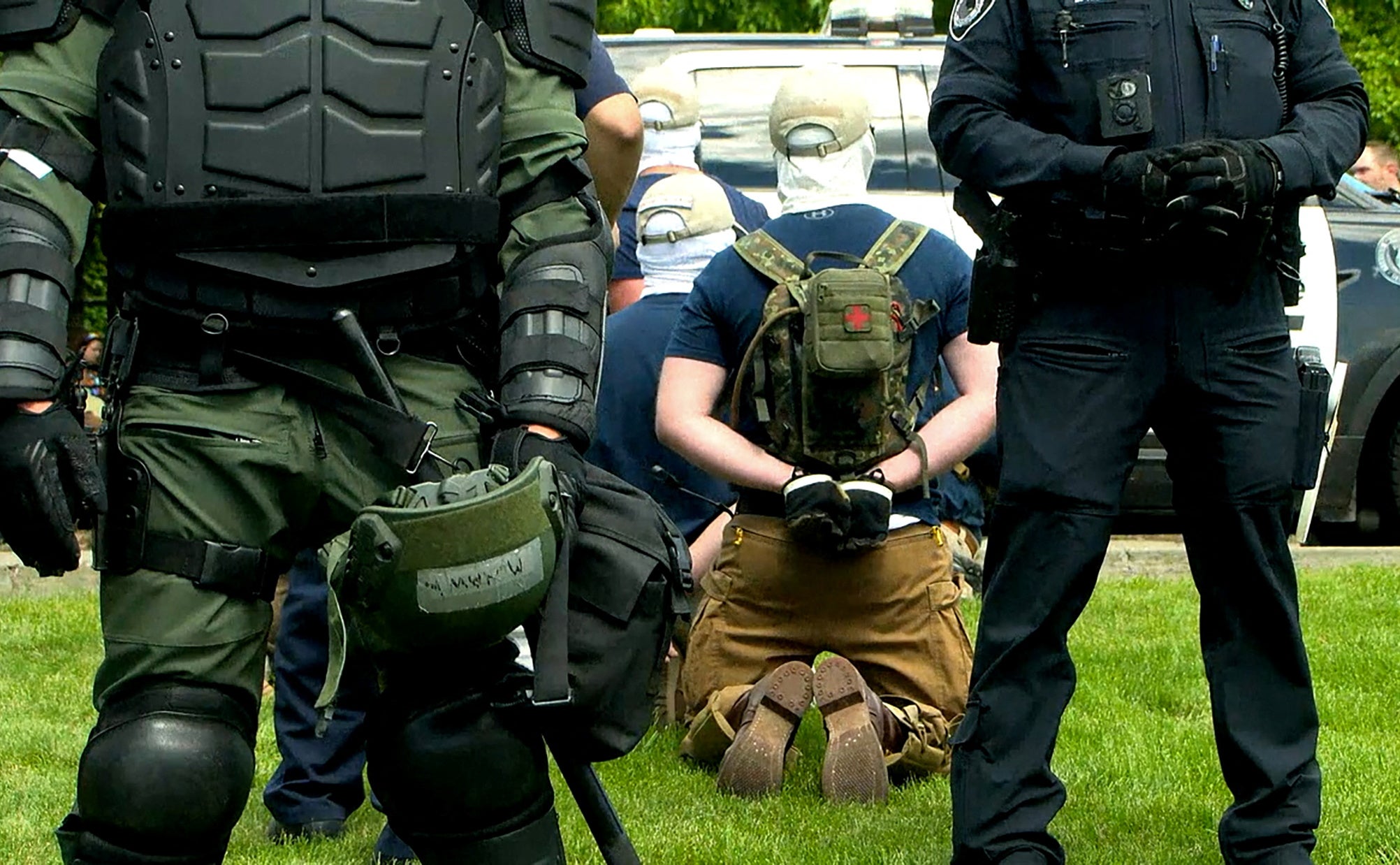 Because this is what happened last weekend:

On Saturday, 31 men linked to the white nationalist group Patriot Front piled into a U-Haul truck in Coeur d’Alene, Idaho. Carrying shields, helmets, a smoke grenade, and long metal poles, they set off for a Pride event in a nearby park.

According to the local police chief, these men, who had traveled from a dozen different states, had written documents detailing their mission: Prepared for a riot, they would enter the park, antagonize Pride attendees, and set off smoke grenades as soon as someone tried to stop them.

There was a smaller event in San Lorenzo CA at a “Drag Queen Story Hour.”

These incidents are the latest escalations of a mounting right-wing campaign to threaten, intimidate, and legislate LGBTQ people out of public life. As communities around the U.S. prepared to stage annual Pride celebrations this month, far-right extremist groups, with the encouragement of Republican leaders, saw an opportunity to take their violent rhetoric off the internet and into the streets.

The “GOP and conservative activists have pushed more and more policies designed to ostracize and criminalize queer and transgender people.”

Those who oppose these policies are lambasted as pedophiles or “groomers”: Drafting momentum from QAnon-related conspiracy theories, leaders in the GOP have taken to accusing people who advocate for a culture that includes and supports LGBTQ youth of harboring an inappropriate sexual interest in children.

Conservatives have used that narrative to validate regular old homophobia and transphobia, giving cover to Republicans who wish to turn voters against LGBTQ rights or simply drum up votes from their base by tapping into a moral panic. But it also appeals to white nationalist extremists, who see queer and trans people as a threat to the patriarchal, fascist state they seek to establish, and are willing to embrace violence against them.

Slate, Michael Feola, 16 Jun 2022: The Conspiracy Theory at the Center of the Far Right’s Violence Against LGBTQ+ People

It’s related to the “great replacement theory” about whites being overwhelmed by non-whites, supposedly by intent. One response is to have more white babies. You can see where this is going.

The far-right obsession with white birthrates extends to nonreproductive sexual practices. As the planned attack on the Coeur d’Alene Pride Festival shows, the far right bears the same hostility toward homosexuality as it does toward interracial couplings and immigration.

And transgender people freak them out even more.

This racial panic over reproduction poses a significant threat to democracy. The homophobia and transphobia of the far right has seeped into the mainstream Republican Party, yielding a wide array of anti-LGBTQ+ policies in recent months. The recent “groomer” campaign, for instance, led multiple state legislatures to propose bills prohibiting discussion of LGBTQ+ issues in primary schools. A wide variety of states have enacted legislation to restrict gender-affirming care for children. And many states have amplified these measures by limiting trans children playing sports on teams of their identified gender. Ultimately, this upsurge in anti-trans activism has not emerged out of thin air. It is fueled by the commitments of the extreme right, which views LGBTQ+ communities as an existential threat for a future white nation.

Have they thought through the consequences of “disappearing” the ideas of homosexuality and transgenderism, of grooming (a word very deliberately used here) all children to marry members of the opposite sex and have children? To the extent that homosexuality is genetically influenced, won’t that just create that many more homosexuals (to be repressed, of course), in the next generation?

Why this shift, since the 1990s? Why did the “future” not settle into the idealized democratic, diverse future that many thinkers thought it might? A huge topic, but a couple thoughts come to mind. First: religion, which of course has never gone away, but has simmered in the background, growing more and more upset about increasingly cosmopolitan world. Thus 9/11, thus the Christian right’s antipathy toward people who are not white straight marrieds with children. Second: social media, which has enabled all sorts of fringe groups to find each other and organize. The hearings this week about January 6th, 2021, show how easy it seems to be for people to form private realities, in defiance of real-world evidence, but in confluence with like-minded folk… and then (as religions do) try to impose them on others.