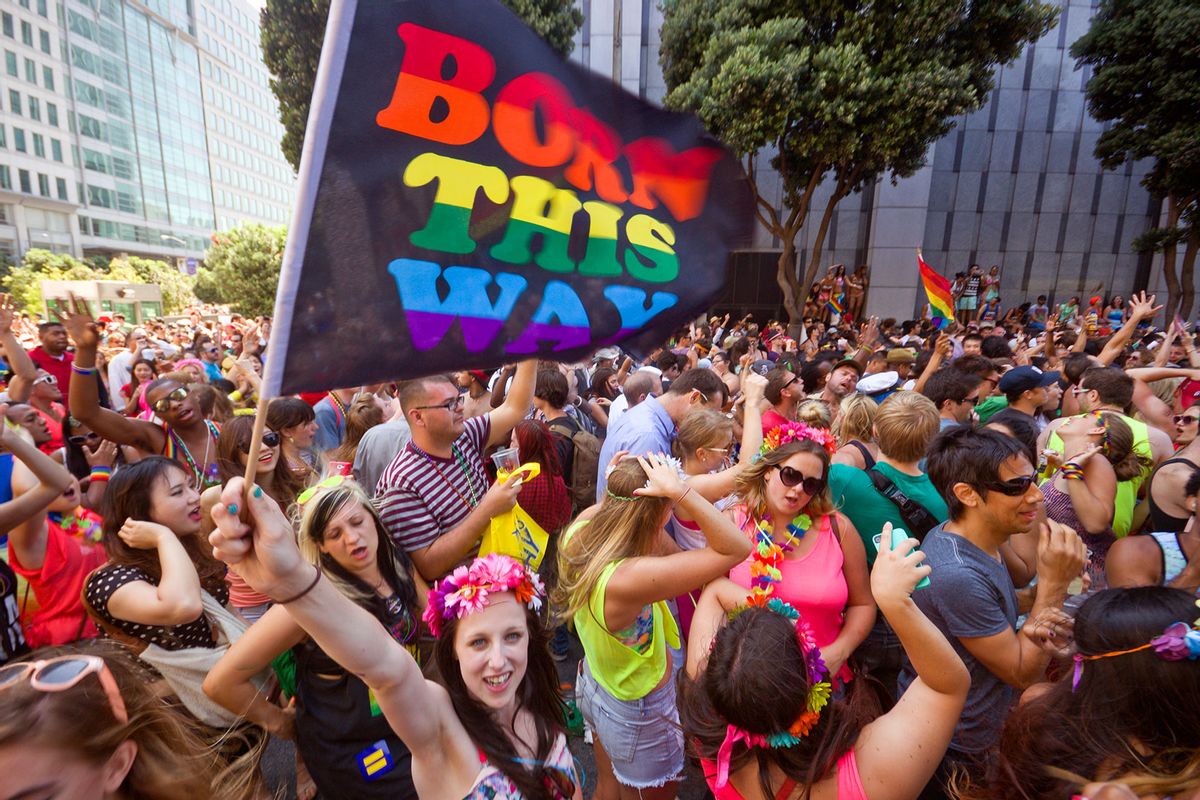 Here’s an article that makes good points about the changing demographics of gays and lesbians and transgenders, but for me misses the key reason that the “born this way” argument is irrelevant.

Back in the 1970s when “gay liberation” was emerging and gays were becoming more visible, there was a common claim that some 10% of the population was gay or lesbian — if you couldn’t tell, it’s because most of them were hidden, “in the closet,” afraid of social disapproval. Apparently this claim goes back to Kinsey, the pioneering sex researcher in the 1950s, and it was only a crude estimate, never confirmed, yet it lingered on. There was even a gay newspaper or magazine — I can’t remember which, or even its exact title — that used “ten percent” in its name.

Over the years that estimate was significantly reduced, to something like 4 or 5% of the population. Just recently there have been surveys revealing that the number of self-identified trans-gender people has risen strikingly. This has caused moral panic among conservatives and is mostly what this Salon article is about. Why should this be so? My quick guess: society has become more accepting and younger people feel more comfortable expressing their true selves. Nothing more sinister than that.

Still, this article misses the key objection to the “born this way” line of reasoning that I’ve always had. I’ll explain at the end.

Excerpts from the article:

Conservative New York Times opinion columnist Ross Douthat described this line of thinking held by many on the political right: “What we’re seeing today isn’t just a continuation of the gay rights revolution; it’s a form of social contagion which our educational and medical institutions are encouraging and accelerating.”

When I was growing up in the 1970s and 1980s, people would often treat the revelation that someone they knew was LGBTQ as though it were a potential contamination event: They might distance themselves from the individual thereafter, or worry that their past association (especially if there was any romantic interest or intimacy) might “taint” or “compromise” their own gender and sexuality. Part of the reason why I kept quiet about my trans-related feelings as a child was that I knew the disclosure would implicate everybody close to me — my family and friends would all be affected (or perhaps “infected”) by my queerness. You could say that I was “closeted” back then, but to me, it felt more like self-imposed quarantine.

Here’s as close as the article comes to what *I* think is the key point:

In subsequent decades, there has been growing acceptance of LGBTQ people, much of it hinging on the public understanding that we are “born this way.” Within LGBTQ communities, that phrase evokes mixed reactions. Some feel that it accurately captures their experience of knowing from childhood that they were different, and finding that there was nothing they could do to make those feelings go away. But others have critiqued “born this way” for its failure to account for their later-in-life shifts in identity, their experiences with gender or sexual fluidity, and/or that the phrase gives the impression that LGBTQ people have suffered some kind of “birth defect.”

For purposes of this article, this is the point:

There is no “queer contagion” sweeping the nation. What we are witnessing is simply a new era of openness and possibilities. Young people who in the past never had the words to describe their feelings, or who knew what they were but felt coerced into remaining closeted (or worse), are now more able to freely express themselves.

Like the gradual increase in left-handedness, there is nothing threatening about any of these developments.

Many people today might be unaware that left-handedness was stigmatized back in the 1960s and before, children inclined that way forced in school to be right-handed instead.

The writer here goes on to suggest how “born this way” might be replaced by different language, e.g. intrinsic and inexplicable.

By inexplicable, I mean that none of us can precisely say for sure why we turned out to be gay, or trans, or otherwise. Nor can we say why some people come to this self-understanding as children, others during adolescence, and still others as adults. Like handedness, sexual orientation and gender identity have no singular easy-to-point-to cause; they are complex traits that naturally vary in the population.

For me the point is always this: why should it *matter* to anyone how other people live their lives? Whether they are inclined to by nature or simply choose to, like making a fashion choice?

The “born this way” argument makes it an excuse; the gay or lesbian says “I can’t help myself” and so the straights give them a break… sorta like they way they wouldn’t harass a disabled person. (Or a “cripple,” a useful term from decades ago that has since become verboten, in the way many similar terms about especially race that have been used by one generation become unacceptable and are overtaken by other terms by the next. [A recent SFWA controversy involved an elderly lady writer using the word “colored.”] Linguistically, this will always be true, about sensitive topics… It will keep happening.)

Conservatives always claim to be about self-determination and relief from a nanny-state government, but conservatives are always the ones complaining about people who don’t live “normal” heterosexual family lives like their own. And who are now, especially in Florida, bringing the weight of the state to marginalize and oppress those people they don’t like. For them, not only does “born this way” not matter, individual choice doesn’t matter. Conformity matters.

This entry was posted in Conservative Resistance, The Gays. Bookmark the permalink.