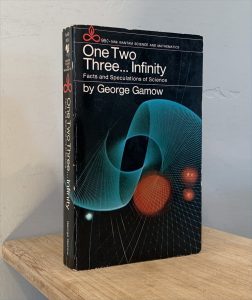 Here’s an oldie, not just for first being published in 1947 (see Wikipedia) but also for being one of the first science nonfiction books I ever read, back when I bought this copy in 1969.

So I would have read this about the time I was in 9th grade and taking, what, high school algebra or geometry? This book doesn’t assume knowledge of those, and largely (but not entirely except in footnotes) avoids equations — just as Isaac Asimov’s popular science fiction, and essays in F&SF, did.

The main sections are about numbers; space, time & Einstein; microcosmos (chemistry and biology); and macrocosmos (cosmology).

It think it was the first section, about numbers, that especially struck me. The chapter “Big Numbers” is about the idea of infinity, how there is no highest number (if you can think of one, just add 1). Despite which, it turns out that there are different orders of infinity —  Aleph One, Aleph Two, and Aleph Three — that are not so to speak the same ‘size’. The first corresponds to numbers on an infinite line; the second to the number of irrational numbers. If you can’t, in principle, match the members of one infinity to the members of another, they’re different orders of infinity.

It’s the counter-intuitiveness that I loved, and how simple logical arguments can demonstrate that counter-intuitive things are true. (Never trust common sense.) Thus, it seems obvious that the number of *all* integers (1,2,3,4…) must be larger than the number of *even* integers (2,4,6,8…), because the former contains all the latter and that many more again. But no! You can easily imagine a pairing rule (1–>2, 2–>4, 3–>6, and so on) that aligns every member of the first to a single member in the second set, and vice versa. So they are the same order. But no such pairing can be imagined between the integers and the irrational numbers (like pi) with unending, unrepeating strings of digits past the decimal. So that’s Aleph Two. These kinds of comparison show that infinity is not a number.

The book goes on with much about mathematics and science that many adults (especially science fiction readers I might mention) absorb even if they’re not mathematicians or scientists: prime numbers, 3D coordinates, topology, atoms and their sizes, the periodic table, relativity, fission and fusion, entropy, absolute zero, randomness, cells, chromosomes, viruses, how we learned the shape of the Earth and the size of the universe, how the planets might have been formed, the main sequence of stars, the expanding universe.

A later key section (in terms of my own later interests) is chapter 10, “Expanding Horizons.” This is all about how and when people discovered, or determined, that the Earth is a sphere, how big it is, and far away the moon and sun are, and their relatives sizes. (There are some cute illustrations of “the world of the ancients,” with the land surrounding the Mediterranean Sea itself enclosed by an infinite ocean, and “an argument against the spherical shape of the Earth” in which all the water simply runs off the globe toward some universal downward. These ideas have not gone away.) And then successive ways of measuring distances: parallax, using the eyes, or naval devices, or the orbit of the Earth; then Cepheid variables and the discovery of the Milky Way and how large it is; and then of other galaxies and how far away they are. And then the expansion of the universe via Hubble. And finally the question of whether the universe is infinite, or perhaps curved back on itself; open or closed, when Gamow wrote an open question.

Good stuff for a bright (though not extraordinary) 14-year-old, or lay adult willing to be educated beyond school. Of course this isn’t a book you’d read today to learn the basics of science. There’s no mention of everything learned in the past 60 years, beginning first and foremost with the structure of DNA and the idea of the Big Bang (though the first was established and the second in the air by this book’s second edition in 1961).

I note that Wikipedia’s entry for this book mentions Sean Carroll, Steven Pinker, and Neil deGrasse Tyson as being especially influenced by this book.

I see from Amazon that the book is still available, today, in a 1988 edition from Dover Books. A problem with keeping this book in print, aside from its datedness, is some of the author’s illustrations and diagrams. Figure 5 on page 15 of this Bantam edition (in the section of big numbers) is captioned “An African native and Prof. G. Cantor comparing the numbers beyond their counting ability.” The professor, white of course, is standing at a chalkboard covered with numbers; the African is sitting on the ground before a straw hut counting with stones. (I won’t photograph it.) Times change. But not the math, or the science.