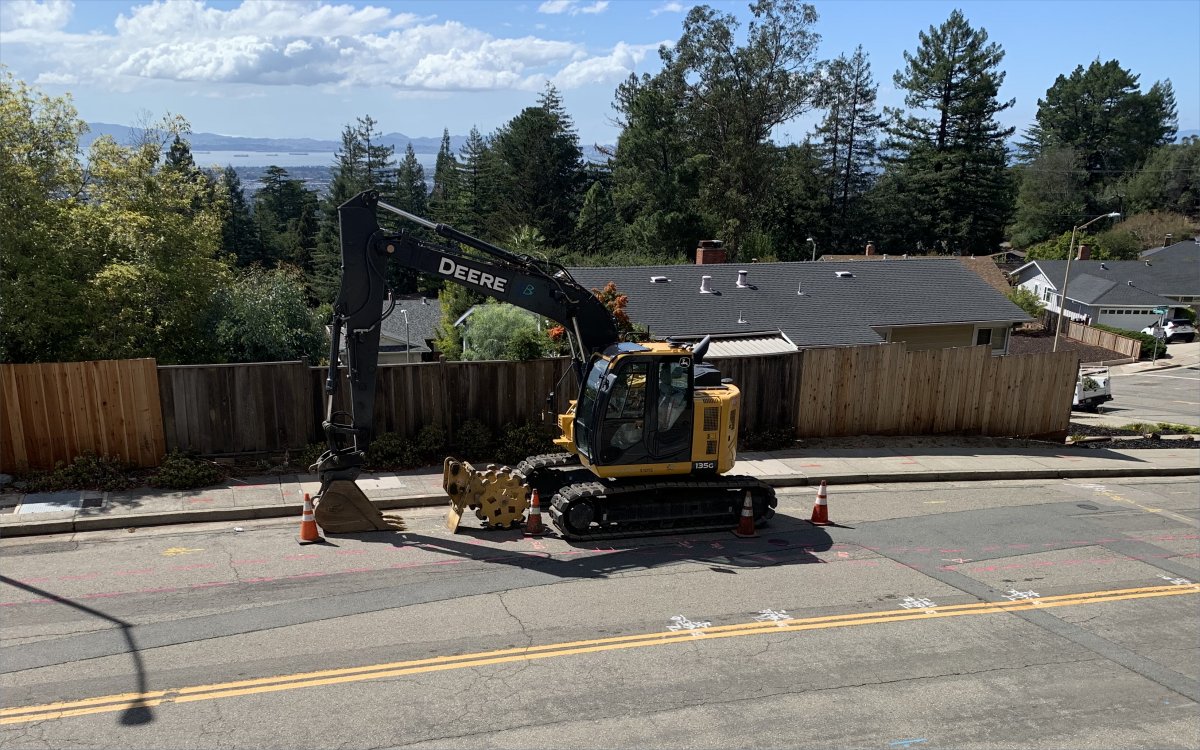 The drenching storm anticipated for Sunday was mostly a bust. Intermittent showers, even a squall or two, but mostly dry. We got only a quarter inch in our neighborhood. No rain today at all. (The storm had been predicted to linger into Tuesday.)

Today was the 15-month interval check-in with my cardiologists, in the city. Fifteen months since my heart transplant. All is well.

We were alerted weeks ago that our local water department would be digging up our streets in order to install new water mains. Several days last week, DWP guys with bright orange vests walked up and down the street, with metal detectors and spray paint guns, leaving behind swaths of white, red, and orange paint on the street and sidewalks. Markers for digging. Remarkably (not), most of the areas they seem planning to dig up are patches from the last time the streets were dug up, before our time in this area. Today, some kind of machine, a backhoe of some sort, appeared parked on the street across from our house.

Yes we’ve been watching much the ceremonies about the death of Queen Elizabeth II over the past week, including some of the funeral this morning before we had to leave for the clinic. Just acknowledging that without further discussion.

The most striking headlines in the past couple days were these, among others on the same topic.

Washington Post, 18 Sept 2022: Republicans in key battleground races refuse to say they will accept results, subtitled, “Of the 19 GOP candidates questioned by The Washington Post, a dozen declined to answer or refused to commit. Democrats all said they would respect the results.”

Salon, Heather Digby Parton, 19 Sept 2022: Toxic effects of the Big Lie: Will any Republican, anywhere, ever concede defeat?, subtitled, “GOP’s latest campaign tactic is also a fundraising grift: Never concede defeat to anyone, even another Republican”

So, Republicans simply don’t believe in democracy? Naturally, even Republicans who thought the 2020 presidential election was rigged don’t challenge the results *in which they won* using exactly the same voting procedures. If Democrats rigged the election for Biden, why didn’t they rig other results as well?

Republicans are either deeply cynical, sure that all they have to do is *claim* voter fraud, without any evidence whatsoever, and a large portion of the population will believe them — or they suffer excessive hubris in thinking that what they believe in is so obviously right that any indication otherwise must be illegitimate. A very blinkered worldview.

Salon, Rich Logis, 18 Sept 2022: I voted for Trump — twice. I was a right-wing pundit. I was dead wrong about all of it, subtitled “I was all-in on Donald Trump’s lies, well after Jan. 6. What opened my eyes? Gather round and I’ll tell you”

Because “the Republican Party is terminally ill, and its leadership knows that; that’s why they have staked a path forward that is, well, backward, with increased emphasis on everything male/Caucasian/Christian and heterosexual.”

This was a front page piece in Sunday’s Times. The two threats: “a growing movement inside one of the country’s two major parties — the Republican Party — to refuse to accept defeat in an election.” And: “The power to set government policy is becoming increasingly disconnected from public opinion.” Referring to the Supreme Court, et al.

The cause: “It was about Building Awareness of the Border Crisis, according to Republican politicians on the Sunday shows. You know, like with breast cancer ribbons, but instead of strips of pink fabric, the props were people.”

And this is sad.

Newsweek: Pat Sajak Accused of ‘Posing With Nazis’ After Photo With Rep. Greene

While not as outspoken about his political beliefs as some modern right-wing figures, Sajak is a Republican and has in the past expressed some views that could be considered divisive by many. Notably, he has referred to himself as a skeptic of climate change and served on the board of a conservative publishing company that released titles from the likes of Rush Limbaugh and Anne Coulter.

“The company you keep is quite unfortunate” tweeted journalist Diana Gonzalez.

This entry was posted in Personal history, Politics. Bookmark the permalink.