Maps of the Universe 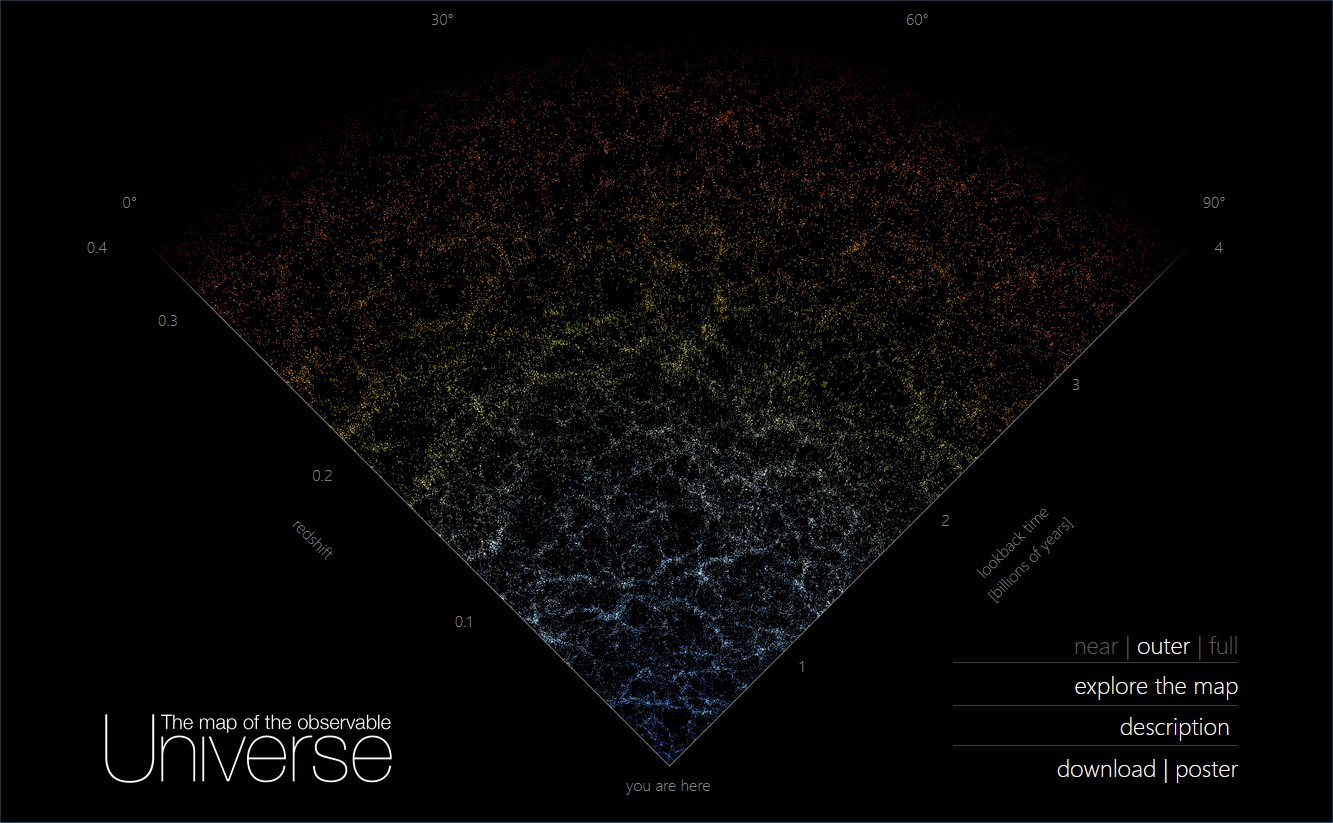 More things in heaven and earth. As a palette cleanser from my 26th, 23rd, and 16th November posts (and many previous), here’s a status check on the latest of what human beings have discovered, through systematic investigation (i.e. science), of the actual extent of our universe.

This is the latest one, with its own interactive scrollable site.

CNET has this article about it, posted 22 Nov: New Scrollable Map of the Cosmos Reminds Us How Tiny We Really Are, subtitled “It’s unsettling to flip through a website scientists made that details the observable universe. I highly recommend doing it.”

Scrolling around the 200,000 galaxies in the map — placed in accurate, relative positions to one another — is calming because it reframes how inconsequential the footprint we place in the universe is. It’s disturbing for precisely the same reason.

Johns Hopkins University has This new interactive map lets you scroll through the universe, subtitled “The map charts a broad expanse of the universe, from the Milky Way to ‘the edge of what can be seen'”

“Growing up I was very inspired by astronomy pictures, stars, nebulae and galaxies, and now it’s our time to create a new type of picture to inspire people,” says map creator Brice Ménard, a professor at Johns Hopkins. “Astrophysicists around the world have been analyzing this data for years, leading to thousands of scientific papers and discoveries. But nobody took the time to create a map that is beautiful, scientifically accurate, and accessible to people who are not scientists. Our goal here is to show everybody what the universe really looks like.”

Actually there have been lots of attempts to “map” the universe; here’s Wikipedia’s Shape of the universe page.

In particular I recall a map from a few years ago depicting our galaxy within a supercluster of 100,000 galaxies given the name Laniakea. Vox, 11 Feb 2015: This is the most detailed map yet of our place in the universe

Of course, this depicts a relatively local area of the entire universe – !

And here are a couple other recent maps of the universe.

This one includes a video.

Here’s Newsweek about the Berkeley map.

All of these things are true, in the sense that all the people who have honestly investigated these issues have converged on these conclusions. This is best humanity can do, being honest about investigating the world.

This entry was posted in Astronomy, Cosmology, Science. Bookmark the permalink.