Neil deGrasse Tyson, ASTROPHYSICS FOR PEOPLE IN A HURRY 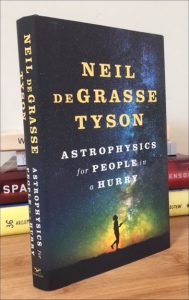 This slender volume of magazine essays came out nearly a year ago, and I read it then, and thought it pleasant but nowhere near foundational. But since it still shows up on bestseller lists, nearly a year later, and has a 4 1/2 star rating on Amazon, I skimmed it again today to document here on my blog. The main problem, I thought when I first read it, was that its scope begins the grandest way possible, with a description of the earliest moments of the universe, and the creation of the elements over subsequent billions of years; but that subsequent essays gradually diminish in scope. We read about Newton’s discovery of physical laws, the discovery of the expansion of the universe, the recent discovery of the ‘dwarf’ galaxies that outnumber the 100 billion larger galaxies, and then about dark matter and dark energy — fascinating, unresolved, topics. And then the book trails off with essays about the periodic table, how spheres are more common in the universe than jagged edges, about the discovery of the full electromagnetic spectrum, and of asteroids, the Kuiper Belt, the Oort Cloud, planetary moons, and via the Kepler telescope, some 3000 exoplanets. All fascinating topics, yet.

The final essay, “Reflections on the Cosmic Perspective,” is a nice finish, though, ahem, Tyson is no Carl Sagan, or Ann Druyan (who wrote the recent “Cosmos” TV series that Tyson narrated, and who rivals Sagan as a writer herself). Tyson says it’s a luxury to think cosmically, acknowledging real-world problems, poverty, people being killed in the name of political or religious dogmas. The universe is bigger than the traumas of life, he says. “Dare we admit that our thoughts and behaviors spring from a belief that the world revolves around us?” p196. If we all had an expanded view of our place in the universe, our problems would shrink.

And he concludes, we owe it to ourselves to explore, p208. “The day our knowledge of the cosmos ceases to expand, we risk regressing to the childish view that the universe figuratively and literally resolves around us. In that bleak world, arms-bearing, resource-hungry people and nations would be prone to act on the ‘low contracted prejudices.’ And that would be the last gasp of human enlightenment—until the rise of a visionary new culture that could once again embrace, rather than fear, the cosmic perspective.”

This entry was posted in Astronomy, Book Notes, Cosmology. Bookmark the permalink.