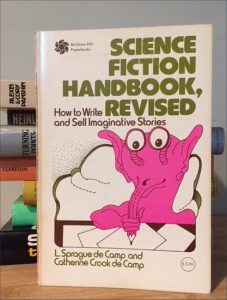 Subtitled: “How to Write and Sell Imaginative Stories”

This is more of a curiosity now, than an essential book of criticism or history, though it does reveal some attitudes of its time. I have a 1975 revision, show here, of the original 1953 edition, so while it wasn’t a book of SF history or criticism, it was certainly one of the earliest nonfiction books published about science fiction.

The first two chapters spend 1/4 of the book summarizing the history of SF, all the way from Homer and the Greek playwrights, to Gernsback and Campbell, to Tolkien and the New Wave, and making a casual attempt to define what he calls “imaginative fiction” – “stories that could not have happened.” He concludes this section by noting that “imaginative fiction is escape fiction. It is primarily designed for the entertainment of the reader.” And he repeatedly throughout the book invokes “the reader” as the ultimate customer and judge for a writer’s work.

Then follows some basic information about editors and publishers, readers and writers, a writer’s talent vs. technique, where writers get their ideas, how to plot a story, how to write it in terms of action vs. description, dialogue, how to depict old or alien languages, and so on. Some of this expands on Sprague de Camp’s essay in Modern Science Fiction (notes here), such as remarks that it takes de Camp a week or two to conceive and plot a story, a month or two to outline a novel. (Which seems extraordinary, compared to writers like Asimov – and Hubbard! – who apparently could write clean copy as fast as they could type, with no lengthy mulling beforehand; I suspect they were the exceptions.) And how to sell it, and how to keep records of sales and of resales of subsidiary rights. (This last chapter is by Catherine Crook de Camp, we’re advised, who became Sprague’s business partner, and kept track of these matters. A situation Sprague recommends.)

Some of this is dated, though much is still valid, especially basic considerations of how to write fiction, and certainly business habits of keeping records. Here’s a passage that is a tad dated, his description of a magazine editor’s office:

Most editors work in small, glass-partitioned offices amid mountains of manuscripts, letters, galley proofs, proofs of covers and illustrations, back files of magazines, advance copies of next month’s issue, a couple of typewriters, stationery, a pot of paste, scissors, ash trays, and the other clutter of the trade.

Pot of paste? Later he describes how to make corrections to a (typewritten) manuscript, e.g. retyping a paragraph and gluing it over the old one, rather than retyping the whole page! Even in 1975, it was an era of typewriters. (And, ash trays? I suppose, even in 1975, but not in 2018.)

Two more curious passages, which strike me as dated as well — characterizations of when reading and writing science fiction wasn’t an element of popular, and even literary, culture as it is today. His characterization of “who reads this stuff?”, readers, p73:

Because many science-fiction fans are adolescents, and because some adolescents are given to exhibitionism and gaucherie, fans as a group have sometimes been scorned as eccentric. Actually, the average fan displays high intelligence, a voracious appetite for reading, and a personality type that often finds it hard to get along with other people.

If they have any common characteristic besides their intelligence and word-mindedness, they probably tend toward the introverted type called the schizoid personality. Many started out as precociously intellectual but under-muscled children, bullied by their peers. Contrary to a common impression, writers are not necessarily fascinating companions, or staunch and helpful friends, or promising matrimonial material. They have a rather high suicide rate.

He mentions, near the end, that there are only 150 – 250 writers of imaginative fiction, and only a minority of those make a living at it. (These numbers strike me as high for 1953, low for 1975, so I’m not sure how to understand these statistics.)

The book ends with a substantial bibliography of recommended SF works (updated for the 1975 edition) and of general reference works, for the author who aspires to write anything about science, engineering, history, and mythology. He mentions in the text that his personal recommendation is to read 1/3 imaginative fiction, 1/3 realistic fiction, and 1/3 nonfiction, mainly science, history, and biography. And to take notes, and keep clippings. (Which I do! Though these days clippings are links.)