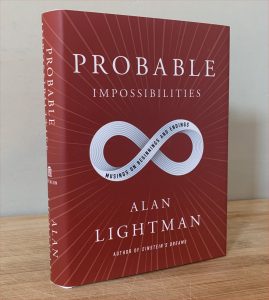 This is a new book of essays by a professor at MIT, author of earlier books including the well-regarded novel Einstein’s Dreams (Wikipedia, way back in 1993) and most recently of essay collection Searching for Stars on an Island in Maine, which I reviewed here in 2019. I was dubious then about Lightman’s straining for the kind of “meaning” that doesn’t actually exist in our vast, inhuman universe. Yet his insights are valuable; he is attuned to the patterns of the universe in a way few people are; and this book has some striking essays.

The book consists of 17 essays, plus notes. Some of these essays are chatty, as when the author interviews various specialists. I’ll just mention the highlights.

This entry was posted in Book Notes, Philosophy, Science. Bookmark the permalink.