Another amazing photo from APOD– 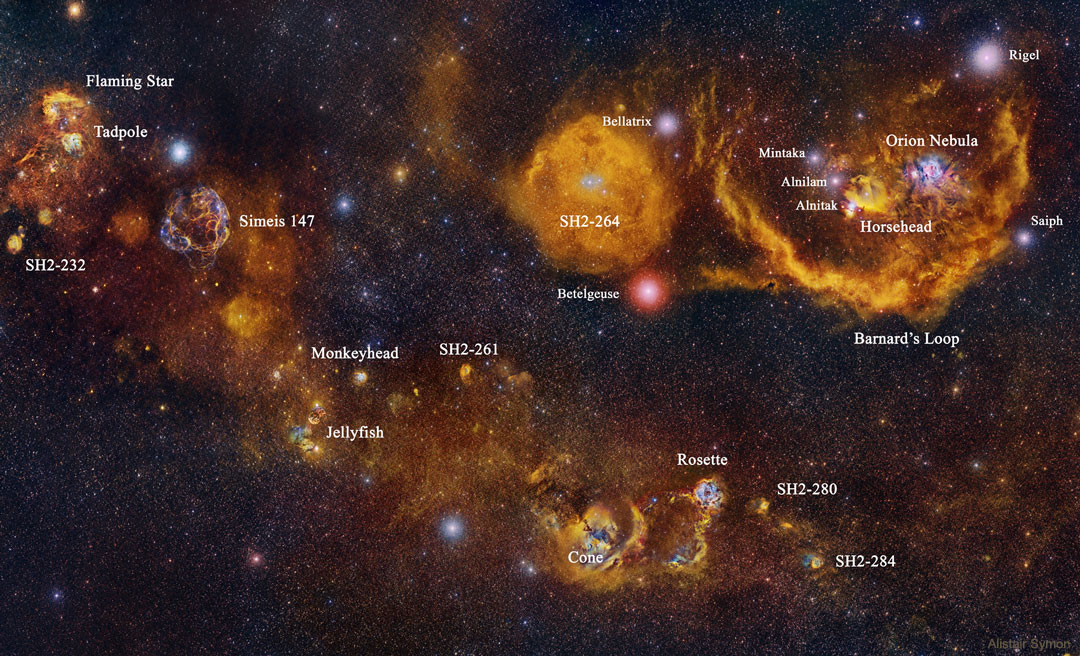 Which as in previous photos like this that I’ve posted, shows a huge swath of sky, as we would see it with all the stars we *can* see, along with all the nebulae that we humans *cannot* see with our human eyes. It’s a big patch of sky, from the constellations Auriga at left to Orion on its left side in upper right. Click to the site and move cursor over photo to see IDs of main stars and nebulae.

Washington Post: Neil deGrasse Tyson on the Pandemic Year: Science Needs Better Marketing, subtitled, “Many people who love their high-tech smartphones refused to trust scientists when it came to Covid.”

If the enterprise of science were some newfangled, untested way of knowing, one might empathize with these sentiments. But the people who battle against science are the same ones who, for instance, wield and embrace their pocket-sized smartphones, which merge state-of-the-art engineering, mathematics, information technology and space physics. It’s an educator’s conundrum indeed.

Which is to say, the conspiracy theorists spread their ideas to their gullible followers via devices built with the very science those followers deny.

The Atlantic: Following Your Gut Isn’t the Right Way to Go, subtitled “The experts had a rough year. We still have to trust them.”

By Tom Nichols — again, a conservative who left the Republican party during the Trump years. I reviewed a book of his a couple years ago: Nichols, THE DEATH OF EXPERTISE.

I’ve spent years telling people, usually with exasperation and a certain amount of petulance, to trust experts and to stop obsessing about the rarity of their failure. But that was before a crisis in which millions of lives were dependent on a working relationship between science and government. Now that I must take my own advice, I feel the same anxiety I’ve so often dismissed in others. We—and I’m including myself here—need to come back to our senses about expertise.

For example, why ask *which* vaccine? Who are we to know? You have to trust people with expertise in areas you are not an expert in, and expect them to trust you in return. It’s part of the implicit social contract.

As paradoxical as this advice may seem, one important step to regaining our footing is for ordinary citizens to stop constantly seeking information as if we were fish darting about in a tank that’s been sprinkled with food. I say this as a victim of the same affliction; like everyone else, I am overwhelmed with extraneous information. I am far too awash in data, including much that I am not equipped to understand, about how each vaccine is made and which trials had better results.

The best experts help us find the sweet spot between our gut and our brain by explaining processes, risks, and benefits in ways that we can understand. The questions we pose to those experts are an important part of establishing a trusting relationship with them. But we must consider whether we are asking questions that are meaningful and intended to help us reach a decision, or whether we are asking questions to enjoy a temporary sense of empowerment.

This belief is the crux of the matter. Sometimes, experts and their institutions fail. But people who believe that medical schools, research institutions, peer review, and lab trials—in other words, the entire structure of modern science—have all failed or become corrupted are beyond the reach of reason, and no expert advice will sway them.

And concludes with an anecdote about being on a submarine in the middle of the ocean, looking up the night sky amid an infinite ocean. And how to be there, he has to trust the entire infrastructure of the people who built and run the sub.