LQCs: The Arc of Historical Progress vs. Religious Oppression in the US 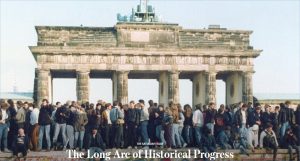 First, my favorite print magazine The Week, for May 13th, in its “Viewpoint” box on the “Best Columns US” page, quotes Francis Fukuyama in The Wall Street Journal (a newspaper I don’t read). But unlike the similarly found David French quote two days ago, I was able to find and link the source column.

The Wall Street Journal, Francis Fukuyama, posted 29 Apr 2022, in the 30 Apr 2022 print edition: The Long Arc of Historical Progress, subtitled, “A democratic world order is not the inexorable outcome of historical forces, but even amid setbacks, societies are clearly evolving toward equality and individual freedom.”

For now I’ll just quote the passage quoted by The Week. Which happens to be in the final paragraph.

Every year, hundreds of thousands of people—sometimes millions—leave poor, violent and poorly governed countries in search of a better life. Their destination of choice is never China, Russia or Venezuela. Rather, they seek out well-governed liberal societies where their children will have greater freedom and opportunity. It is they much more than the complacent inhabitants of liberal societies who realize that there is, indeed, an arc of history, with justice as its terminus.

The point I take from this paragraph is that all those refugees at our borders, the ones who Republicans/conservatives hate for being foreign, for baselessly taking ‘American’ jobs, whom T**** vilified as being criminals, should in fact be welcomed. Except for the “Native Americans,” all of us in the US, or our ancestors, were refugees at some point, over the past 500 years. In particular, the people who have made their way to our borders are the incredibly brave, ambitious ones, who have given up their homes and their lives, against political oppression or failing crops due to climate change (this is only going to get worse), to make their way to what they think of as a promised land. Immigrants throughout history are the braver, more ambitious ones, compared to those who sit at home and criticize.

Yet the rest of this post is how the US is becoming less and less a “promised land” of freedom and fairness, more and more a theocracy of the kind many original immigrants tried to escape.

NYT, Jamelle Bouie, 10 May 2022: The Movement That Put Alito on the Court Isn’t Finished

Which brings us to the logic of the political movement that brought us to this point. Those of us outside the conservative movement and the religious right tend to think of them in terms of what they’re against, but it is helpful here to think in terms of what they want. Judging from their priorities, as well as their leaders and intellectuals, these movements want a hierarchical society of traditional morality and patriarchal family structure, where male-led households are disciplined by an unrestrained free market. A national ban on abortion — which, if Republican lawmakers are any indication, is where much of the movement will go after the court overturns Roe — is part and parcel of that vision.

No one wages a generational battle to reshape American society for the sake of a partial victory. And for the reactionaries at the helm of the conservative movement, the end of Roe v. Wade is exactly that — a partial victory.

As handy a definition as any: the difference between liberals and conservatives is that the former wants to expand rights, the latter wants to take them away and keep them for themselves.

(With a photo of five white men looking down on another white man signing a bill.)

Slate, Victoria Nourse, 10 May 2022: What SNL Got Right About What’s Wrong With Alito’s Leaked Opinion

Namely, the doctrine of “originalism,” that modern laws and the Constitution must to defer to what was meant by its writers, or even, in this case, “13th Century common law” that informed law up until the Constitution. This is ludicrous on a couple grounds. First, as this article cites, the Constitution (and earlier law) can be cherry-picked (just as the Bible can be) to justify whatever conclusion is wanted. (E.g. the “well regulated military being necessary to a free state”? No one considers that anymore. ) And the status of women when the 14th Amendment was written — who would have approved female Supreme Court justices then? That too is ignored. But not in the current cases of things the conservatives want to abolish.

Second, as in all law that relies on “precedent,” the practice offers no opportunity to learn, to take new evidence or circumstances into account, to change our minds. We are always beholden to what the ancients thought, whether the Bible writers or the Constitution writers. Our modern civilization didn’t get built that way; it was built by science and technology, the philosophy of Enlightenment, that acquired new knowledge (instead of rejecting it, as the fundamentalists do), and took it into account to increase human welfare and happiness for more people, not just those in charge.

Slate, Dahlia Lithwick, 10 May 2022: The Horrifying Implications of Alito’s Most Alarming Footnote, subtitled, “A ‘domestic supply of infants’ is exactly what the framers of the Fourteenth Amendment intended to abolish.”

Alito’s opinion implies that the benefit of prohibiting abortions is to increase the “domestic supply of infants” available for adoption.

Alito’s main argument about “unborn human beings” (a phrase he repeats over and over in his decision) merely represents one point on a broad spectrum of religious belief.

He dressed it up as law, with a healthy dose of pseudoscientific grumbling about fingernails and heartbeats thrown in, but it’s really all about Alito’s religious belief that “human life” begins at conception.

When should a zygote, an embryo or even a fetus be acknowledged as a human being? At fertilization? At quickening? At viability? At birth? All have been both legal and religious standards at various times and places throughout our history.

[ with examples of varying standards ]

Other religions throughout history have recognized life as starting with the first breath, as implied in Genesis 2.7 and 7.21-22.

And this familiar point:

Seriously, if these folks cared one whit for “the innocent children” they’d stop school shootings by getting guns under control in this country. But they don’t. It’s just a lot easier to “love” a fetus that doesn’t talk back, doesn’t need health care or education, and doesn’t have a particular immigration status. Once it’s born, all bets are off.

That simple reality pretty much proves the cynicism of Alito’s charge that the state must be able to step in with the force of guns and prison bars to “protect” a zygote or fetus. This is all religious performance art, with women as its victims.

The central issue is that one particular strain of religion is now imposing its beliefs on all the rest of us in the US. That’s it (all Christians in general) forms the majority is precisely the reason the Constitution and its amendments define “rights” that the majority cannot abrogate.

This entry was posted in Human Progress, Morality, Politics, Religion. Bookmark the permalink.