About FTX and effective altruism; political examples in the spirit of the recent Borowitz book; examples of how the media covers events; and a perspective on the American economy under Republicans and Democrats.

Items here noted to read later. I’m not sure how the collapse of the crypto firm FTX reflects on the concept of “effective altruism” except by character association. MacAskill’s book is still in my TBR list; I’m up to page 75. Ross Douthat, NYT, 18 Nov 2022 (Subscriber only): The Case for a Less-Effective Altruism

Some thematic follow-ups to the Borowitz book I just read:

He just makes stuff up. And last night he was back to ranting about immigrants. Citing no actual evidence, of course.

I’m always impressed by how journalists summarize a news story in their first paragraph, and how they can if they like shade the news one way or another by placing the current story in a larger context. (The headlines themselves are written by editors, I understand, and should not be blamed on the bylined writers of the story.)

The issue here is how reports of Trump’s announcement the other day (to run again for president in 2024) did or did not lead with mentions of his involvement with Jan 6th 2021 insurrection on the Capitol. Example, from WaPo:

Donald Trump, the twice-impeached former president who refused to concede defeat and inspired a failed attempt to overturn the 2020 election culminating in a deadly attack on the U.S. Capitol, officially declared on Tuesday night that he is running to retake the White House in 2024.

This Media Matters piece serves as a handy compilation of major news sources, each one examined on this point. Washington Post, NPR, NBC News, Associated Press, New York Times, Politico, Los Angeles Times, ABC News, CNN, CBS News, Wall Street Journal…. and even Fox News (which buries its reference to the 2020 election to its 20th paragraph, and a photo caption).

Salon, Amanda Marcotte, 15 Nov 2022: Why did single women vote for Democrats? Republicans have an asinine theory, subtitled “Republicans believe Democrats have brainwashed unmarried ladies — who are clearly unable to think for themselves”

Citing no actual evidence, of course. The usual conservative misogyny.

Thursday morning, in the first public act of the new majority, senior House Republicans revealed their most urgent priority: They would investigate Hunter Biden.

Because, of all the problems in the world, this is what they think is the worst. 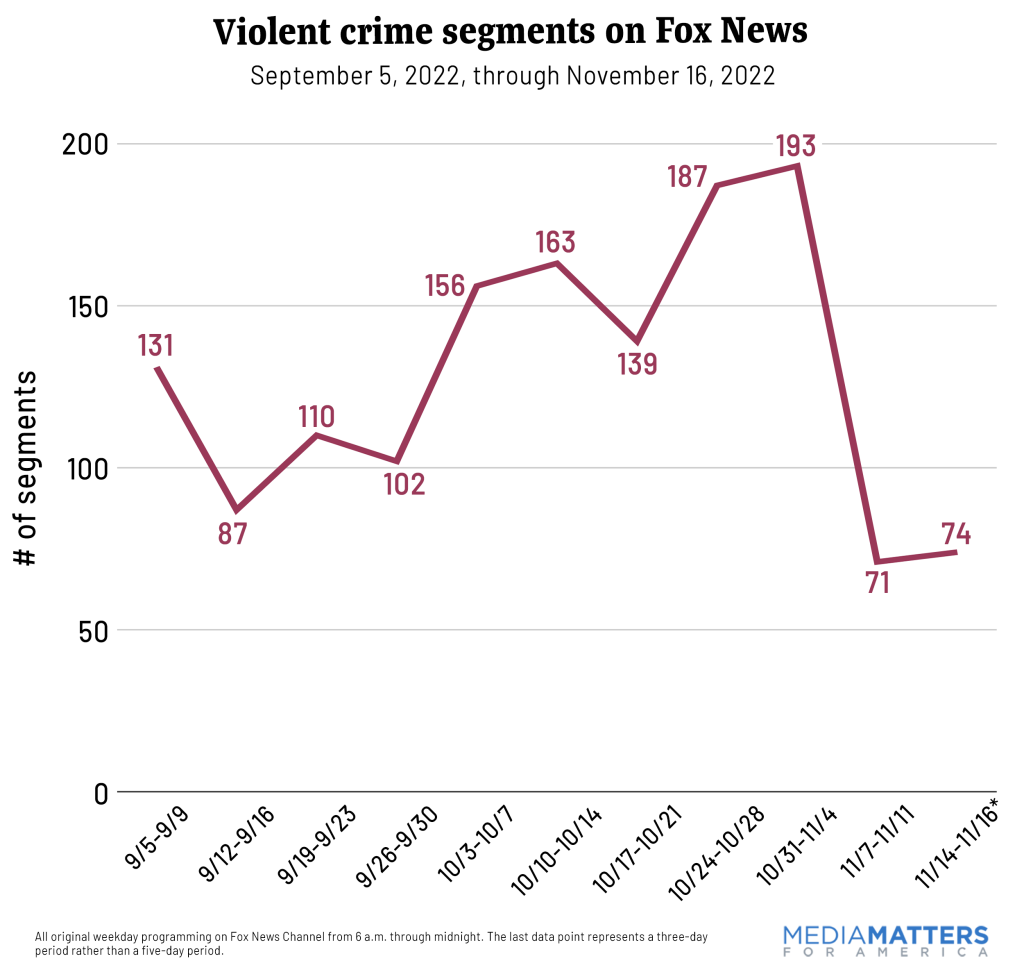 Media Matters, 17 Nov 2022: Fox’s coverage of violent crime dropped after the midterms, subtitled “Weekday violent crime segments decreased by 50% in the week of the election compared to the weekly average since Labor Day”

This entry was posted in Human Progress, Politics. Bookmark the permalink.