My parents were Robert Harry Kelly and Helen Elizabeth Pierce, born 1933 and 1934 respectively. They both grew up in small towns in northwestern Illinois – Cambridge and Kewanee, respectively.

My particular branch of the Kelly family derives from the Isle of Man, an island in between Great Britain and Ireland, and the earliest ancestors in the family tree that some of my relatives compiled several decades ago came over the US in the 1860s. The family coat of arms is a triskelion. My father’s side, the Kelly side, was roughly ¾ Swedish, and ¼ Manx. My mother’s side, I was given to understand, was a mix of French, German, Swiss, and English. So the result is that I am a mix of various European roots.

The Kelly family in America goes back to a Swedish “colony” called Bishop Hill, again in northwest Illinois. I have early memories of visiting my great-grandmother there, in the early ‘70s; she lived into her 90s.

My father was from a relatively poor background, as far as I have gathered; his father, a farm hand and later factory worker (for John Deere), lived in a house at the northwest corner of Cambridge, Illinois, that was so basic it didn’t even have a fireplace. My mother was from a relatively well-off background. Her father was the sheriff of Henry County, Illinois, who was killed in the line of duty, in a shoot-out with some criminal, when my mother was about 10 or 12. The family story is that after this tragic event, my grandmother on that side was, according the law at the time, made temporary sheriff herself, until a special election could be held to elect another.

Alas, I have no detailed records of my parents’ early lives. They married in 1953 — when both of them were still 19 years old. My father had gone to college, I think at the University of Illinois in Urbana-Champaign (or whatever it was called then), wanting to be an architect. But before he finished, he went into the US Air Force, became a meteorologist (or at least a weatherman), and was assigned to an American base in southeast England, in 1954. My parents lived in Felixstowe, near Ipswich, and in 1955 I was born in a maternity hospital, Phyllis Memorial Home, a bit north of there, in a small town called Melton. Because I was born off-base, I acquired British citizenship, as well as American citizenship because of my parents. So I had dual-citizenship until just before I was 18, when my parents had to file some papers to renounce my British citizenship in order to avoid my being drafted into the British military.

In Felixstowe, the family friend was a neighbor woman named Ruby. One of the stories I remember [again: in a crucial sense, everything we remember about our past are stories, told over and over again in our minds or whenever we relate them to others, and not necessarily reliable as actual history — but nevertheless meaningful, as meaningful as anything from our past can be] is that my mother would leave me outside in a pram during the day, even if the weather (since we were right on the coast) was cool and damp. I have always credited this to my relative tolerance of cool weather. I am the last one to put on a coat. In the mild SoCal weather, I can go a whole year without putting on a coat. (At the same time, given my high desert experience, I withstand dry heat easily as well. It’s hot humidity I have difficulty with.)

My parents returned to the US in early 1957, when I was only a year and half old, via a long flight that landed half-way for refueling in Newfoundland. So I have no direct memories of England. I do have boxes of photo “slides” [an antique term, now, which is why I put it in quotes] that I inherited from my father on his passing in January 2001, including a number of their apartment in Felixstowe, the beach strand with strings of multicolored lights, and even of the maternity hospital where I was born. I’ll continue to mine these boxes and scan the best ones for uploading, for my family members at least.

When my father’s Air Force service was over, he came back to the US and settled in the high desert of southern California, for reasons I’m not entirely clear about. Partly it was due to a friend of his, Rollin Bigbee, who lived in Burbank; or perhaps, though returning to the US, my father wasn’t completely out of the Air Force, and had been reassigned to a base in the high desert near LA.

So we settled in Apple Valley (despite the name, a rather desolate desert town 100 miles northeast of Los Angeles), near George Air Force Base, just west of the larger town of Victorville, CA. (The base was decommissioned in 1992.)

Here’s a map showing where Apple Valley is, relative to the Los Angeles basin to the southwest. 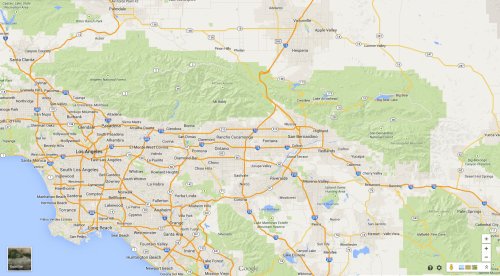 Apple Valley is in the upper right, near Victorville and Hesperia. The big green bands between there and Los Angeles below are the San Gabriel Mountains, with Big Bear Lake, Mt Baldy, the Angeles Crest Highway, and Mt. Wilson. The world to the north is utterly different from the world to the south. The desert is sand and rocky hills and vast expanses, at an elevation of roughly 3000 feet. The western end of that desert, between Victorville and Palmdale, is the area the rock band U2 took as the setting for their 1986 album “The Joshua Tree” – which included the song “Where the Streets Have No Names”. (This is true: all the roads out across the desert there have designations like Avenue F, or 152nd St east. No names.)

My father got a job as a draftsman, for a man named John Blesch, who had an office in the area of Apple Valley called “the village,” about midway along the stretch of Highway 18 that runs straight west-east, in what is actually the southeastern end of the valley.

Our earliest residence was a rented apartment near his job, but we soon moved to what must have been a rented house, in the northeast corner of the valley, out by Fairview Mountain – a cinderblock house, and this is the place where I have my earliest memories… of lying in a crib with my parents in the other room; of a dog called Tammy running up the driveway. Everything was sand and scrub brush, alongside rocky hills.

In a pattern that was to be repeated, we moved from the rented house into a house that we bought, on Winnebago Road, to the southwest of the rented house and just north of what was then the small Apple Valley airport. This is the house where I lived for four years or so, through kindergarten and the 1st grade, and where later my maternal grandmother lived into her 80s. My family visited her many times over the years, and after they moved back east, I visited her over the years, until her death in 1984. My long-time connection to this place is why I list it as my hometown on Facebook. I have many pics, which I will scan and post eventually.

But a little bit more family background. My mother had one brother, Robert (my ‘Uncle Bob’), who I think must have also been in the service at some point, though I don’t think I ever knew the details, and who settled in the Los Angeles suburbs (the San Fernando Valley) afterwards. Because both he and my mother’s family settled in southern California, my grandmother on that side, who’d previously lived her entire life in a small northwestern Illinois town, relocated to southern California herself sometime in the early ’60s. For a time she lived in an apartment in Costa Mesa, in Orange County. To get just a bit ahead of my personal timeline: when my own family moved from Apple Valley down to Santa Monica, when I was in 1st or 2nd grade, my grandmother moved in with us, in an apartment that was adjacent to the garage at the back of the property along the alley. And when, after 6 months, my father gave up that Santa Monica rental and bought a house in the San Fernando Valley… my grandmother moved out to Apple Valley, to take possession of the house my father had not been able to sell.