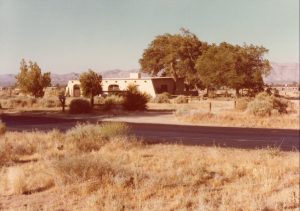 These are photos that I took anywhere from 1980 (when I bought my first camera, a Pentax SLR) to 1982 (when I’d bought my first car, a Honda Accord hatchback), of the house at 15791 Winnebago Rd. in Apple Valley, CA, where I lived as a kindergartner and first grader (around 1960), and then visited many times over the years as it was my grandmother’s home, until her death in 1984.

The previous page showed photos of the house as it looked around 1960, when my family lived there. Over the next some years, my father sold the house to my Uncle Bob, my grandmother’s other child, and in the late 1970s Uncle Bob had it remodeled, changing out windows, installing a new facade, and covering it in beige stucco. Here are some front shots, one with my Uncle’s car, another with mine, in the driveway.

The remodel gave it a mock-adobe treatment, with that angled facade. Some of the trees at the left corner of the house, and the messy cactuses at the front of the lawn, were removed. The crab-apple tree remained, and the big elms in the yard. He extended the northwest corner of the house to add a decent-sized dining room, somewhat expanding the kitchen, and adding an interior access to the front corner utility room, which before was accessible only via an outside door. Alas, he also removed the small patch of lawn on the north side of the house, outside the old kitchen, and had that area paved in concrete and enclosed by a wall. (The street was in fact getting more built-up. In 1960 the next house farther north was some 1000 feet away. And currently, in 2019, there’s hardly an empty lot on the entire street.) He removed those impractical large windows at front and back, and enclosed into a garage what had previously been a carport, at the far northeast corner. 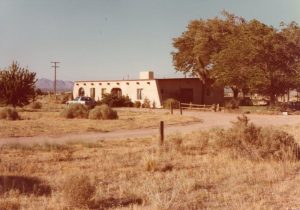 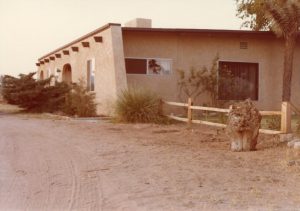 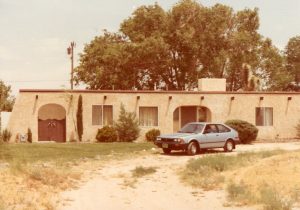 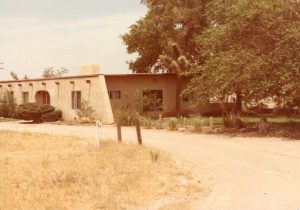 Here are several more shots of the side and back of the house. First, the green lawn. At the end, the small Joshua Tree (they grow very slowly) along the side of the house, the living room window to the left. 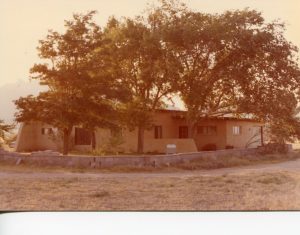 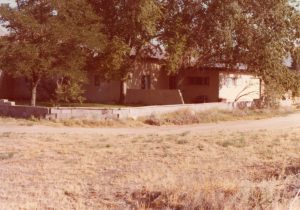 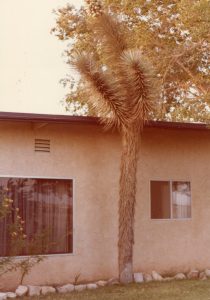 Here’s a view from the lawn looking south, to that house on the hill. 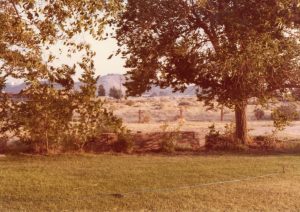 Then a view of the lawn while being sprinkled…an oasis in the desert. 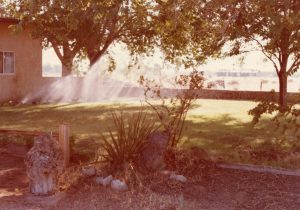