Only four months late, here are some notes and observations I had about our trip to Dublin in late April. Yeong had a business conference for three days, Tuesday to Thursday. We flew in the previous weekend, and stayed through the following weekend. I jotted these notes in an email at the time…

Overcast/rainy most of the time. The tour guide at Trinity College said they have four days of sunlight per year. Joke? Perhaps not.

People walk quickly along the sidewalks. I walk fast, and kept being by overtaken women of a professional air.

I realize downtown Dublin is a tourist hub, but why all the streets so full of pedestrians at midday? Especially young 20-somethings of mixed races. Trinity College students? Didn’t strike me as student types, judging from the guide we had.

Aside from these younger energetic folk, population overwhelmingly white, pale, to the point of being pink, with a noticeable portion of ‘gingers’ – red-haired people. Not unattractive.

Every fourth person or so on the sidewalk smokes, a much higher percentage than in any American city I’ve been to lately.

Everything here is built of stone or brick, as pointed out by our Trinity College tour guide; earlier buildings of wood rotted away. The complete opposite of building construction in LA, of course, where stone and brick crumble in earthquakes.

Everyone jaywalks whenever possible, but then this is true in most cities, except LA.

And, apparently in a tacit concession to tourists and visitors from countries who drive on the ‘right’ side of the road, crosswalks routinely have stenciled instructions on the pavement to ‘look left’ or ‘look right’ before jaywalking.

I’ll also try to upload a few photos from my iPhone here. I don’t take many photos anymore; I find the preoccupation of many tourists with taking photos (often of themselves) as opposed to just experiencing the place they’re in, to be perverse. Also, I’m just not a very good photographer; I stopped trying to take photos of awards winners at conventions after one photo in particular was ridiculed online (because I could not control that the subjects were looking off in other directions, or had funny expressions on their faces). So I stopped taking an SLR camera with me on trips years ago. But now I have an iPhone, which brings a camera along with it.

I don’t have any photos of Dublin, actually, just a few from the day trip we took to the Cliffs of Moher, and along the way we stopped at Dunguaire Castle (which I Facebooked about earlier). Here’s a pic. (Click for much larger image.) 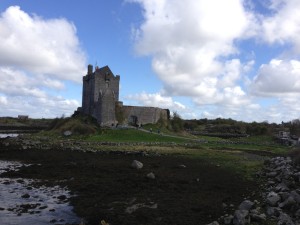 If I can find my Facebook post about this, I’ll link or quote it, but Fb does not seem easy to search among older posts.

Here is a view outward from the top. 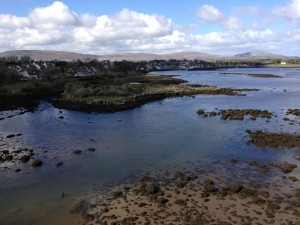 Here is Yeong from the top, the view looking back toward the road. 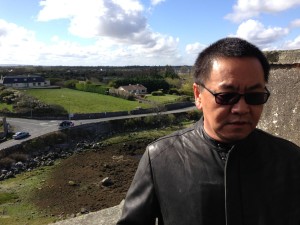 The top floor is lavishly furnished, and was occupied until only a few decades ago… 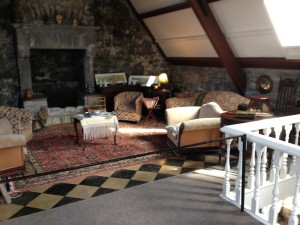 And the steps from floor to floor are narrow and spiral. 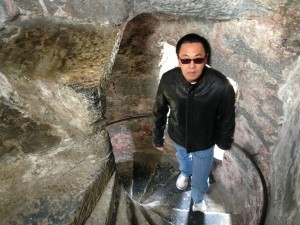 Onward to the Cliffs of Moher. 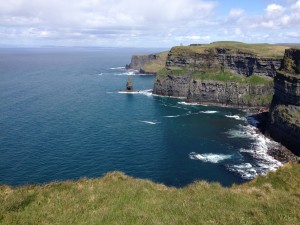 The cliffs are beds of shale and sandstone, some 300 million years worth, having been eroded by the continuous onslaught of the Atlantic Ocean. There are trails along the edges of the cliffs for a mile or two in either direction from the visitor center. We spent a couple hours walking back and forth. It’s easy to see how daredevil tourists might get too close and fall over, and there are signs warning about this. At the visitor center, I asked a clerk if anyone had fallen over recently. Not this year, she said. 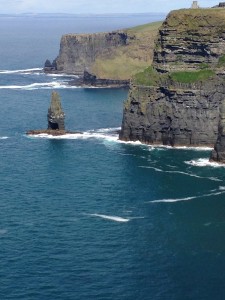 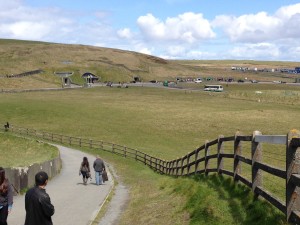 That’s all for now. There are more pics, including some from Dublin, on Yeong’s iPhone. I’ll track them down.

This entry was posted in Travel. Bookmark the permalink.