Both boys are in town this holiday weekend, so the four of us headed (via lunch at a Korean BBQ place in a dicey part of town) to the California Science Center — one of a cluster of museums just south of downtown and USC and north of the Coliseum (focus of the 1984 Olympics) — where the space shuttle Endeavour has found its home, after the trip, almost a year ago now, on the 747 over Los Angeles, and the slow tow across the city from LAX to the Center.

The Science Center is largely an aerospace museum comparable to the Smithsonian’s in DC, or the Space Center in Huntsville AL, which I’ve been to several times — all of them preserving Mercury and Gemini and Apollo capsules, with mockups of satellites and rockets, and jet and experimental aircraft, such as the SR-71. Endeavour is obviously CSC’s crowning attraction. The facility is temporary, basically a large warehouse just big enough to hold it. An expansion of the center is planned, where the shuttle will sit upright.

I hadn’t planned to take pics, but started doing so on my iPhone when I saw this… 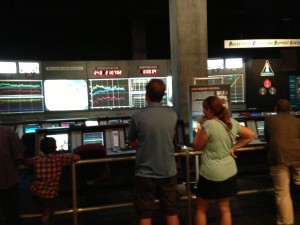 Not a great pic, but. This is the Rocketdyne Operations Support Center — ROSC — a set of computer consoles and screens that used to be a large room at my place of employment, in Canoga Park, CA. For the duration of the shuttle program, we maintained a sort of mini-Mission Control, where technicians would monitor the shuttle — in particular all the sensors in the SSMEs, Space Shuttle Main Engines — from before launch and especially for the 8 minutes of the launch while the SSMEs fired to put the Shuttle in orbit.

When the Shuttle program ended, Rocketdyne donated the whole facility — complete with desk chairs and Rocketdyne mugs — to the California Science Center.

(I never served duty in that room, being, as a software programmer, a couple steps removed from actual operations. But I’d been through the room several times.)

Here’s another pic of the ROSC, with the poster about where it came from. 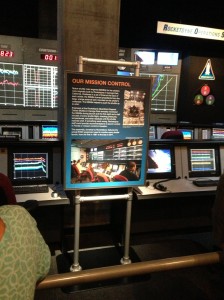 Endeavour fills the space, so it’s hard to get good pics. Here are a couple. 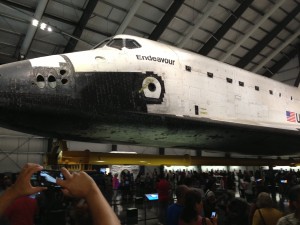 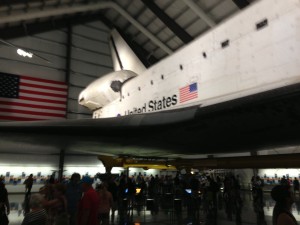 And, at the back, the three SSMEs. 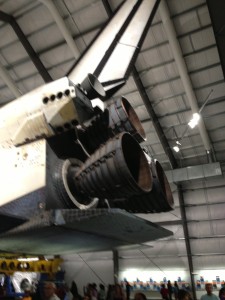 In the northwest corner — about where I was standing to take previous pic — is a mounted SSME. (Not in great focus, sorry.) 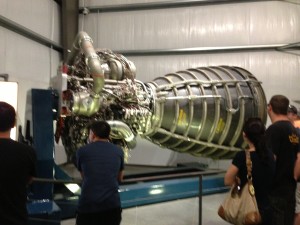 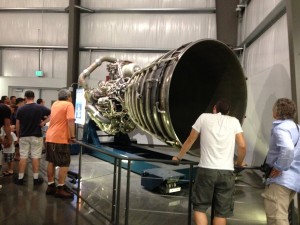 And in this pic, the black box in the middle center of the frame, about the size of a microwave oven, is the Controller, which contained the software that monitored the sensors, 60 times a second (IIRC), and sent commands to the engines from the cockpit to throttle up, down, and so on. The software for this Controller is what I spent most of the ’80s maintaining. 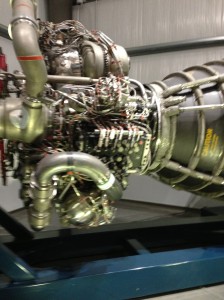 By ‘maintaining’ I mean, making small changes to the operating instructions as NASA decided such changes were needed. But also, occasionally, redesigning entire sections of the logic to make it more efficient. This box had 16K memory -! Every word counted. The biggest thing I did in the late ’80s was to redesign the entire sensor processing module, which had been patched over several years, to make it more efficient and save some 10 or 20% of memory that it had taken up.

At the back end of the shuttle, under the tail and behind the landing gear hatches, were two open panels… 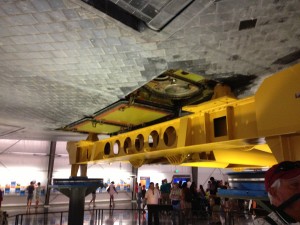 We deduced these were the connections from the fuel tank to the SSMEs. Both liquid oxygen and hydrogen.

Not a very clear pic, but– 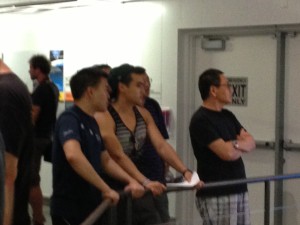 These are Jimmy, Michael, and Yeong, looking at the SSME. Michael is finishing his second summer internship at Rocketdyne, and is more knowledgeable by now than I am, about how rocket engines work. He’s headed to UCLA for grad school next month. 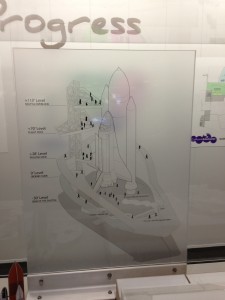 A schematic of what the eventual display of the shuttle will be, when it’s built. Upright, with fuel tanks and solids.