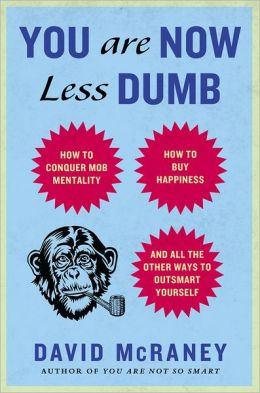 I’ve been meaning to close out my thoughts on David McRaney’s brilliant second book, YOU ARE NOW LESS DUMB, which I first posted about a month ago.

First, let me follow up on his ‘narrative bias’ described in the first part of the book. A prime example of how human beings prefer story over reality is, to take something very topical, the commentary over the film Gravity. It is a brilliant film in many ways, but, to anyone schooled in basic physics, has a few obvious flaws. I mentioned a couple of these in my own blog and Facebook posts (especially about the scene in which George Clooney does *not have to let go*), but it was Neil deGrasse Tyson’s Twitter posts that raised the issue for most people. The common response was — who cares? It would compromise the *story*, so don’t be so finicky.

And just recently, there is the depressingly frequent response to tragedies as in the Haiyan typhoon that struck the Philippines. It’s a paradoxical effect that the people who survive such tragedies (those who don’t aren’t around to offer their opinions), perversely claim their faith in God has *increased*. This strikes me as yet another example of confirmation bias and narrative bias. Survivors cling to what they think they understand, because, if they lose that, what else is left?

Second, I don’t think I mentioned this before, but there are ideas in McRaney’s two books that I had *not* heard about before, in any sense. One is the “Normalcy Bias”, in which people subjected to sudden catastrophes react in an oddly passive manner. The famous Canary Island crash of two 747s is one example that he describes; many passengers did not escape because the shock of the crash paralyzed them, if for only a minute — long enough for them to die in the explosion of the fuel tanks. The same principle explains why people in disaster-prone or threatened areas do not evacuate. They don’t think the threat will apply to them.

The finale of the second book is about the “Self-Enhancement” bias, about how everyone over-estimates their own abilities. The key point is that this is functional — without this bias, people might not keep functioning. With this bias, even if you’re ‘fooling yourself’, you will be happier. Everyone thinks they are above average — better drivers, more attractive, than the average.

This bias serves an evolutionary advantage — those who feel superior, for whatever reason, may reproduce more often, and pass this attitude on to future generations.

Which of course parallels the idea that religious people, while being deluded about the nature of reality, may actually be happier in life than those who perceive reality for what it is.

Now, I’ve threatened to write a book about how science fiction informs this great divide between what people think – the whole psychological narrative of biases that disguise true motivations while promoting (an in evolutionary sense, ahem) human behavior and existence – and what people, mostly scientists, perceive as the reality of the universe. If I were to do so, I would mine examples of stories that push the boundaries of what humans think of as reality – the assumptions of time and space – that indirectly challenge why humans should think we, living on one planet in an immense universe, should think that, for example, the conclusions of bronze-age desert tribes living in a tiny part of our planet, two or three thousand years ago, should have, coincidentally and magically, discovered the singular truth about the origin and purpose of the universe.

There are many such examples.

But recently I’ve been reading a rereading a number of classic short stories in the SF field, and here is one that speaks directly to the function of religion… as a sap, for those who can’t handle the truth.

It’s a Hugo winning story by George R.R. Martin, famous these days as the author of Game of Thrones and its sequels, basis for the TV series. The story is “The Way of Cross and Dragon”, (here’s a link) and it’s about a future Catholic church that investigates a heretical sect that proclaims Judas a saint. It turns out [– spoiler alert –] the author of this heresy just made it up. Because all faiths are Lies invented to make people happy.

The truths, the great truths—and most of the lesser ones as well—they are unbearable for most men. We find our shield in faith. Your faith, my faith, any faith. It doesn’t matter, so long as we believe, really and truly believe, in whatever lie we cling to.” He fingered the ragged edges of his great blond beard. “Our psychs have always told us that believers are the happy ones, you know. They may believe in Christ or Buddha or Erika Stormjones, in reincarnation or immortality or nature, in the power of love or the platform of a political faction, but it all comes to the same thing. They believe. They are happy. It is the ones who have seen truth who despair, and kill themselves. The truths are so vast, the faiths so little, so poorly made, so riddled with error and contradiction that we see around them and through them, and then we feel the weight of darkness upon us, and can no longer be happy.

Yes, exactly my theme. Human kind cannot bear very much reality. (Or perceive it to begin with, as the psychological studies increasingly show.)

So this post turns out not to be so much an examination of Mr. McRaney’s book – which, in any case, is brilliant, and which I recommend highly.