As a follow-up to the last post, I’ve read three other books in the past several months about the theist/rationalist divide. Here are some note and comments, one at a time. (The other two, to follow, are books by Adam Lee and Peter Boghossian.) 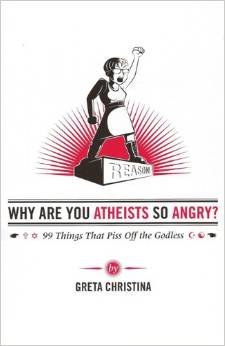 The most aggressive of these three books is Greta Christina’s Why Are You Atheists So Angry?, subtitled, “99 things that piss off the godless”. Her opening chapter is a litany of these 99 things, from which I’ve captured a representative sample (with a couple editorial highlights):

Atheists are mistrusted for public office and denied certain positions; how priests and parents terrorize children; at priests who rape children; that the Catholics have protected them; at 9/11; at Jerry Falwell blaming it on the gays and the ACLU; at circumcision; the protocols of the elders of Zion; at honor killings; parents who use faith healing; belief in creationism – because they embrace a lie that contradicts the evidence; battles against evolution in schools; the author’s wife Ingrid’s grandparents; bigotry against LGBT people; Mormons who ‘lie for the lord’; girls told to be submissive; modesty patrols; the holocaust, and blaming it on atheists; the caste system in India; Galileo; the church opposing condoms in Africa; making abortion illegal; abstinence-only sex ed; glorifying faith with no good evidence; accusing atheists of being arrogant; the idea that the enormous universe was made just for humans (and then accuse atheists of being arrogant); that religious people often don’t know the tenants of their own religion; that Christians claim to be victims; policy based on ancient religious texts; never questioning one’s religious beliefs; the Magdalene laundries in Ireland [related to the Philomena story]; exorcism; justification for slavery; revisionist history; Salman Rushdie; Quiverfull families; scientology practices; “I feel it in my heart” (#83); the double standard in attributing good to God and bad to ‘mysterious ways’; the self-centered pettiness of most prayer; the idea that religious faith is a virtue, and to reject reality, or that it doesn’t matter whether their beliefs are really true; at believers who reject *other* beliefs and imply they alone are doing it right; including treating some things in the Bible as not literal (how do they know?); at the hatred expressed toward atheists (e.g. on her blog); at people asking why she’s angry.

• Your anger is just hurting yourself
• Your anger is just hurting your cause
• Atheism is just another religion…
• Just because religion has done some harm doesn’t mean it’s mistaken
• All religion isn’t like that. You’re not being fair….
• All believers aren’t like that. That’s not the true faith.
• How can you be so hateful? …
• People need religion…
• Why do you care what other people believe? …
• What about all the good things religion has done?
• You wouldn’t be so angry if you just accepted Jesus Christ as your personal savior
• If you’re so angry, what are you doing about it?

The author of course provides cogent responses to these naïve questions.

The next few chapters address why the author thinks various soft forms of religion – moderate and progressive; new age; spiritual but not religious; ecumenicalism and interfaith – are just as problematical. Because they all promote reliance on some kind of faith, as opposed to dealing with the actual, real world.

The final chapters address atheist activism. Does trying to argue people out of religion ever work? Well, yes, it does, and she provides evidence from email responses to various atheist authors from their readers.

The strategy that works? Discussing the absurdity of beliefs; the immorality of them; their diversity; the similarity of myths; that science as a better explanation; realizing that non-belief is an option; realizing that religious apologists are cherry-picking; how cognitive biases support religion. And so on.

One of the next books to discuss, by Peter Boghossian, extends this theme: it’s called A Manual for Creating Atheists.

This entry was posted in Atheism. Bookmark the permalink.