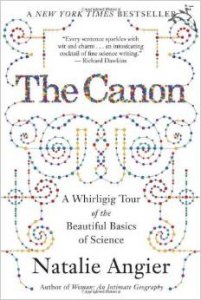 Subtitled: A Whirligig Tour of the Beautiful Basics of Science

As I was unpacking books these past few weeks, at our new home in Oakland, I came across this book which I hadn’t yet read, but which seemed appropriate to read in the context of my current project to consolidate my thinking about science and philosophy with the perspectives of science fiction and fantasy. So here is one more piece of the puzzle I am putting together.

The author is a Pulitzer Prize winner for writing about biology for the New York Times. The introduction describes her motivation for writing this book: her dismay that her friends gave up their museum memberships as their kids grew up. She realizes most adults don’t care about science — even find it boring. Scientists are not good at promoting the relevancy of their fields, and she summarizes the familiar arguments for promoting scientific literacy. And science, she emphasizes, is fun.

The foundation of the book is hundreds of interviews Angier had done [I’m using past tense since the book was published 8 years ago] with real-life scientists [as opposed to citing and quoting from books by those scientists]. The result is, as it says, a whirlwind summary of the basic points of the major scientific disciplines.

That’s cool. But the author’s style is the opposite of matter-of-factual; it veers between ingratiating and grating. She likes cute, sometimes clever, metaphors, like, e.g., describing entropy (and potential energy):

The energy is there, but it might as well not be, like a taxi passing you on a rainy night with its NOT IN SERVICE lights ablaze, or a chair in a museum with a rope draped from arm to arm, or a teenager.

Or a teenager. Cute. A longer example, about the Second Law of Thermodynamics:

The second law might also be called the “Humpty Dumpty directive.” Once the big, smirking, pedantic, cravated egg had his great fall, all the king’s horses, all the king’s men, all the plastic surgeons, duct tape, and members of the National Transportation Safety Board couldn’t put Humpty Dumpty together again. The second law is the reason why either you or a hired professional must expend considerable effort to clean you house, but if you leave the place alone for two weeks while on vacation, it will get dirty for free. It explains why some drinks taste good cold, some taste good hot, and most taste lousy at room temperature — red wines, of course, excepted. The second law guarantees a certain degree of chaos and mishap in your life no matter how compulsively you plan your schedule and triple-check every report. To err is not just human; it’s divined.

So if you’re not completely turned off by that style, the book is useful. Especially for the first three chapters, which address general concepts about “thinking scientifically”, probabilities, and calibrations. Science is not a body of fact, but a way of viewing the world; it assumes that there is an objective reality. Evidence counts, not opinions. Mental biases are the enemy of science. Scientific thinking is about overcoming the intuitive understandings we develop in childhood.

Probabilities: a statistics teacher split her class into two parts, one to flip a coin a hundred times to capture a set of actual random results, and the other to create a list of what they thought a set of random results would look like. The teacher could always tell the difference: because randomness looks nonrandom, including runs that people think do not look random. Such patterns in randomness suggests hidden meanings… thus superstitions.

Interesting asides about Enrico Fermi’s fondness for challenging co-workers with on-the-fly estimations: how many piano tuners are in Chicago? The goal was to get within an order of magnitude of the actual right answer.

And the third chapter is about Calibration: Playing with Scales. Look at the stars, look at the Grand Canyon. “Throughout history, people have wildly misjudged distances, proportions, comparisons, the bead of being … We have evolved to view life on a human scale, to concern ourselves almost exclusively with the rhythms of hours, days, seasons, years, and with objects that we can readily see, touch, and count on…”

Thus we perceive numbers of things in groups of five; our unit of time the second, is about a heartbeat. And so on.

After these three initial chapters, there are six following chapters that address: