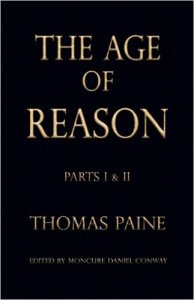 Thomas Paine was one of the Founding Fathers of the United States, author of Common Sense in 1776, which inspired the American revolution, and Rights of Man in 1791, which defended the French Revolution.

He’s one of those Founding Fathers that Christian partisans like to believe intended to create a Christian nation. On the contrary, I’ve discovered, Paine also wrote, late in his life and partly in prison, The Age of Reason, published in parts from 1794 to 1807, about which Wikipedia has a long article, which is a passionate denouncement of Christianity. In it Paine defends his deistic belief – that the obvious magnificence of the universe indicates a creator God – but ridicules the Bible on numerous grounds, and rejects all formal creeds. The book was controversial (for its tone as much as for its arguments) and drew many angry critiques, though as the 19th century advanced, many of his ideas took hold, and were reflected, for example, in the writings of Mark Twain.

From my contemporary perspective, the book says a great many very obvious things about the implausibility of many parts of the Bible, and how and why they came to be written without actually being the word of some celestial being. What strikes me most about the book is not its arguments, which by now are familiar from many sources, but its timing — that is, it was easy, even two centuries ago, for a diligent person to perceive all those implausibilities through a close reading and comparison of the various Biblical texts. These texts have always been there in plain view, in millions of copies in millions of households. That the absurdities and historical oddities of the anthology of texts that comprise the Bible aren’t more widely appreciated and understood would be, I think, due to the facts that casual believers never read the entire Bible, but rather selectively read and cherry-quote certain passages directed to them by serious believers, and serious believers (including the clergy) are motivated to ignore or explain away its problems in order to preserve the status quo. There is no motive in religion, as there is in science, to undermine established assumptions with new evidence or reasoning.

I bought a print copy of Paine’s book a few weeks ago, without realizing until I finished that it includes only the first and second parts. The entire text is online, of course — here, for example – and I see that Part III is an exhaustive examination of all the citations, in the New Testament gospels, to passages from the Old Testament that are implied to be prophecies about Jesus Christ, from which Paine concludes,

The practice which the writers of those books employ is not more false than it is absurd. They state some trilling case of the person they call Jesus Christ, and then cut out a sentence from some passage of the Old Testament and call it a prophecy of that case. But when the words thus cut out are restored to the place they are taken from, and read with the words before and after them, they give the lie to the New Testament.

I’ll not post all my detailed notes about the book, as I’ve been doing with the NT books, but will try instead to summarize Paine’s key points.

This entry was posted in Bible, Book Notes. Bookmark the permalink.