Lawrence M. Krauss: THE GREATEST STORY EVER TOLD — SO FAR

Lawrence M. Krauss’ new book is a book by a theoretical physicist, and so the greatest story turns out to be — a history of physics, especially of the last few decades. 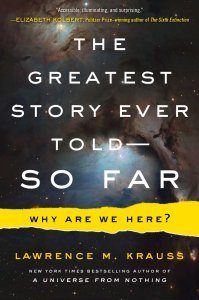 He begins by emphasizing how this is a story of how science reveals a world that is profoundly nonintuitive, and undermines the simple assumptions humans have made about their world throughout history. Some sample lines from the prologue:

“It’s a story that deserves to be shared far more broadly. Already in the first world, parts of this story are helping to slowly replace the myths and superstitions that more ignorant societies found solace in centuries or millennia ago.” 1b. (1b means bottom of page 1, etc.)

2.8, “…what cosmic arrogance lies at the heart of the assertion that the universe was created so that we could exist?”

3.1, “Everything about our evolutionary history has primed our minds to be comfortable with concepts that helped us survive, … Evolution didn’t prepare our minds to appreciate long or short timescales or short or huge distances that we cannot experience directly…

3.7, “Surely that is the greatest contribution of science to civilization: to ensure that the greatest books are not those of the past, but of the future.”

A major step was humanity’s realization that there’s more to the universe than meets the eye, 4.8; we need a narrative to make sense of our existence; 6t, “We cannot understand that hidden world with intuitions based solely on direct sensation. That is the story I want to tell here.”

Then he begins with Plato’s cave as a powerful metaphor for how its residents do not perceive the outside world directly, but only as shadowed projected on the cave walls. Jumping forward, the first hints of a non-intuitive world were experiments in the 19th century showing that light behaved like particles in some contexts, like waves in others. Then Einstein a century ago, considering the points of view of observers moving relative to one another. Then quantum mechanics, and the uncertainty principle.

Along the way Krauss humanizes the scientists who did this work, with anecdotes about Feynman, about Fermi, Sheldon Glashow, Steven Weinberg, and others.

The story moves through the discovery of new forces, the advent of fission and the H-bomb, the understanding of fusion as what powers the sun; the idea of symmetry breaking, how all the various subatomic particles relate to each other and to field. And then to speculation about other particles, a potential unification, the construction of larger and larger colliders, culminating recently with the detection of the Higgs boson in 2012.

This gets a bit abstruse at times — symmetry breaking, gauge theories –and I did not follow every detail. (I was an astronomy major in college, until I hit physics for which I had no intuition for and couldn’t force myself through with math. So I became a math major, focusing on very different kinds of math.) I wasn’t familiar with the notion of spontaneous symmetry breaking, and how an apparent accident in the history of the universe resulted in our actual set of forces and their interactions, which had that breaking gone randomly a different direction, nothing we know of in the universe would exist. Krauss offers a couple elegant metaphors: a round dining table set with wine glasses; do diners pick up the glasses to their right, or left? Never mind convention — in principle it could be either way, and once a single diner makes a choice of left or right, that determines the choice for everyone else. Also, the way ice crystals form on a glass window, in treelike patterns in which the crystal lattice structure makes forces along the spine of a crystal quite different than a force perpendicular to that.

Krauss makes only brief mention of theories that attempt to extend the Standard Model of physics that has been vindicated by detection of the Higgs boson — superstring theory, M-theory. He calls them “mostly speculation”. He ends with the detection of gravity waves, portending something called quantum gravity, which might finally relate gravity to all the other forces wrapped up in the Standard Model. All the questions are not answered yet.

He concludes by considering the philosophy of what all this means and why we should care. He cites two contrasting views of the world, as humans wonder, why is there a universe at all? And why are we here? The first view is to assume we have special significance, that the world was creating for us; and that is the conventional, comfortable view of most people throughout history. The second view is to assume nothing, examine the evidence, and discover “a universe whose laws exist independently of our own being.” (303t) “The answer seems all the more remarkable because it reveals explicitly just how deeply the universe of our experience is a shadow of reality.” (303.7)

If we now ask why things are the way they are, the best answer we can suggest is that it is the result of an accident in the history of the universe in which a field froze in empty space in a certain way…

Our primitive ancestors survived in large part because they recognized that nature could be hostile and violent, even as it was remarkable. The progress of science has made it clear just how violent and hostile the universe can be for life. But recognizing this does not make the universe less amazing. Such a universe has ample room for awe, wonder, and excitement. If anything, recognition of these facts gives us greater reason to celebrate our origins, and our survival.

To argue that, in a universe in which there seems to be no purpose, our existence is itself without meaning or value is unparalleled solipsism, as it suggests that without us the universe is worthless. The greatest gift that science can give us is to allow us to overcome our need to be the center of existence even as we learn to appreciate the wonder of the accident we are privileged to witness.

This entry was posted in Book Notes, Physics. Bookmark the permalink.