The Instinct Can Be Fought: TOS #24: “A Taste of Armageddon”

The Enterprise attempts to initiate diplomatic relations with a planet conducting a computer war with its neighbor planet, a war in which theoretical causalities voluntarily go to die in disintegration chambers. 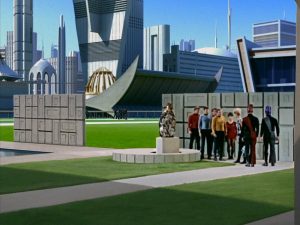 The crucial theme here is relevant to our times. We understand, much more deeply than anyone understood in 1967, that human nature has certain instincts, that might be lived with, and understood, yet which should be overcome, for the health of a multicultural, global society, which is inevitable, as the human race expands to fill up the planet. This theme applies to the recent violence in Charlottesville. Do we presume that all our base instincts are true and must be acted upon? Or do we try to understand them and rise above them?

This entry was posted in Star Trek, Uncategorized. Bookmark the permalink.