Bertrand Russell: Why I Am Not a Christian: Summary and Comments 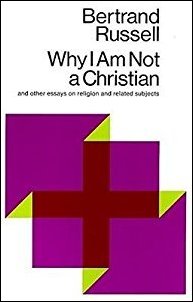 This is a famous essay/lecture by one of the 20th century’s most influential philosophers. I first read the book containing this essay in 1979, when I was 23; I was thrilled to find someone so eminent unapologetically spell out the problems with faith and religion that had already becoming obvious to me. I happened to pick it up again today, and thought the essay worth recording and responding to, with some understanding of intellectual advances since this lecture was delivered in 1927.

These arguments about the existence of God, and the mixed record of religion as a positive or negative force in the world, are not new. The so-called “new atheists” of the first decade of the 21st century – Sam Harris, Daniel Dennett, Christopher Hitchens, Richard Dawkins – became well-known because society had changed in the century since Russell, becoming more multicultural, more accepting of alternate ideas, and more influenced by the effects of science and technology, which (unlike religion) truly have changed the world, mostly for the better — and so much more receptive to the revealing of their insights about the archaic effects of religion.

So here’s my summary/paraphrase of Russell’s famous 1927 lecture. My comments are in [[ dark red brackets ]]. Page references are to the Touchstone paperback edition of the book, https://www.amazon.com/Christian-Essays-Religion-Related-Subjects/dp/0671203231/, still the current edition in print, as shown here.

To say one is a Christian – which used to have a much narrower, tighter meaning – these days [remember he’s speaking in 1927], means believing in God and immortality, and having some notion that Jesus was the best and wisest man in all of history.

First, about belief in God. Traditional arguments claim proof of God through mere reason. But these arguments are easily refuted.

But “What really moves people to believe in God is not any intellectual argument at all. Most people believe in God because they have been taught from early infancy to do it, and that is the main reason.” P14.1

Second, about Christ. Author actually agrees with Christ on some points more than most Christians do:

Still, author understands that people accept religion on emotional grounds. It’s often argued that religion makes men virtuous. In Samuel Butler’s Erewhon Revisited, a man returns to a primitive remote country many years after his first visit, to discover the locals now venerate him as a god. When he insists he is not, they urge him to remain quiet, lest the country turn wicked without its worship of him.

Author notes the “curious fact, that the more intense has been the religion of any period and the more profound has been the dogmatic belief, the greater has been the cruelty and the worse has been the state of affairs.” P20.6. Thus the Inquisitions, the burning of witches, and so on.

In contrast, “You find as you look around the world that every single bit of progress in human feelings, every improvement in the criminal law, every step toward the diminution of war, every step toward better treatment of the colored races, or every mitigations of slavery, every moral progress that there has been in the world, has been consistently opposed by the organized churches of the world.” P20-21.

With a very specific example of the church’s prohibition of birth control to prevent, e.g., the passing of syphilis from a father to his children. Religious morality, it seems, has nothing to do with human health or happiness. [[ My own theory: church teachings about sex, about prohibitions against homosexuality and birth control, has everything everything everything to do with enforcing behavior that would expand the tribe. Increase the population. Overcome the rival tribes. And nothing to do with individual human happiness or health, or self-determination. ]]

Russell goes on about fear: “Religion is based, I think, primarily and mainly upon fear. It is partly the terror of the unknown and partly, as I have said, the wish to feel that you have a kind of elder brother who will stand by you in all your troubles and disputes.” P22.

The solution: “Science can help us to get over this craven fear in which mankind has lived for so many generations. Science can teach us, and I think our own hearts can teach us, no longer to look round for imaginary supports, no longer to invent allies in the sky, but rather to look to our own efforts here below to make this world a fit place to live in, instead of the sort of place that the churches in all these centuries have made it.”

And: “When you hear people in church debasing themselves and saying that they are miserable sinners, and all the rest of it, it seems contemptible and not worthy of self-respecting human beings. We ought to stand up and look the world frankly in the face. We ought to make the best we can of the world, and if it is not so good as we wish, after all it will still be better than what these others have made of it in all these ages. A good world needs knowledge, kindliness, and courage; it does not need a regretful hankering after the past, or a fettering of the free intelligence by the words uttered long ago by ignorant men. It needs a fearless outlook and a free intelligence. It needs hope for the future, not looking back all the time towards a past that is dead, which we trust will be far surpassed by the future that our intelligence can create.”

The whole text is here:

This entry was posted in Book Notes, Philosophy, Religion, Science. Bookmark the permalink.