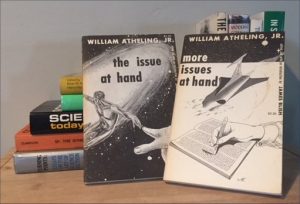 James Blish, a science fiction author who emerged in roughly the same era as Damon Knight (they were born a year apart in 1920 and 1921 and both began publishing notable fiction in the early 1950s), wrote critical essays about SF in the 1950s and 1960s that eventually were collected in two slim volumes, THE ISSUE AT HAND and MORE ISSUES AT HAND, both published by Advent:Publishers as Damon Knight’s IN SEARCH OF WONDER was, the books long regarded as counterparts or companions to Knight’s influential volume. Blish was not as prolific a commentator as was Knight, but his approach was similar in many ways: he insisted on scientific veracity and on literary standards. If anything, Blish was more persnickety than was Knight. In these books Blish frequently opines how certain habits of storytelling had by his time become established as most effective, and any variation from those habits were errors that needed to be fixed. Thus, for example, he has trouble with Frank Herbert’s DUNE because of its switching from one character viewpoint to another, a technique he understood to be not as effective a storytelling technique and single point of view. And he hoped Herbert would figure this out and become a better writer.

Blish’s first book, THE ISSUE AT HAND (first edition 1964; I have the second 1973 edition) focuses on magazine short fiction, in contrast to Knight’s focus on books. The essays range from 1952 to 1962. He begins with an essay of ‘propositions’ – that SF needs more criticism, in order to grow; writers need to know there are certain standards of competence. He doesn’t spell these out, so much as criticize stories on various grounds that he assumes everyone understands are those standards of competence.

In the second essay, he begins by recommending the essays of Damon Knight.

In the final essay of this first book, he wonders about the central appeal of SF. How while SF readers are often more widely read than readers of other genres, writers of SF almost always confine their energy to SF. He cites Poul Anderson’s speech at the 1959 Worldcon, “an appeal for a unitary approach to science fiction, in which philosophy, love, technology, poetry, and the elements of daily life would all play important and roughly equal roles.”

And then Blish wonders why the popular novels of Orwell, Vonnegut, Bernard Wolfe, Aldous Huxley, and Franz Werfel have not attracted more readers to genre SF. His conclusion: because most genre SF is about technical things; those books were about things that mattered–the relationship of the individual to the state; about power for its own sake; about what people do when technology replaces their jobs.

He cites Childhood’s End and More Than Human as SF that has such conviction. And is dismayed by recent Hugo nominations. Good SF is not about comfort and safety. “It is precisely the science-fiction story that rattles people’s teeth and shakes their convictions that finds its way into the mainstream” And so, he urges (in 1960!), that his reader vote in the Hugos, and think about each title, and ask, is it about anything??

The second book, MORE ISSUES AT HAND, consists of material first published mostly in the mid-1960s, with a couple essays going back to 1957 and one from as late as 1970. These focus more on novels than on the short fiction of the first volume. Highlights:

The final chapter, from 1970, is about the term “speculative fiction,” how SF is often judged by its worst examples, and how the Hugos are not reliable judges of the best SF (because e.g. that Vonnegut’s THE SIRENS OF TITAN didn’t win).

And then he discusses the “New Wave” of science fiction’s late 1960s, which he characterizes thusly: emphasis on problems of the present; emphasis on manner of telling; claims that this is the direction SF must go. And a few worthy stories among it all.

He discusses the various advocates and examples of New Wave writers, with special attention to Judith Merril, who wrote a few stories and novels but was best known by the mid-60s as the editor of a series of “Best of the Year” anthologies, beginning in 1956 and ending in 1968. Blish/Atheling’s take is that Merril began (like Moskowitz) as a reader exclusively of SF, with no knowledge of general literature, or of science. As she went on, she discovered literature – and so her anthologies became more and more idiosyncratic, including pieces by mainstream authors, ordinary satire, comic strips and cartoons. She embraced the term “speculative fiction” (over “science fiction”) and later the “New Wave” because they exonerated her from any implication of an obligation to understand science. Also: how she submitted, in the early years with Simon & Schuster, many more stories than could be used, and how the publisher at S&S made the final selections.

Finally, Blish discusses the prominent New Wave authors. Ballard, whose stories seemed to be forming a mosaic on some topic that even he may not be aware of. Aldiss, Brunner, Moorcock, Ellison. Zelazny and Delany and their “mytholotry” – Blish finding Delany nearly unreadable, more sympathetic to Zelazny. And he concludes by discussing Aldiss’s BAREFOOT IN THE HEAD at length, with its allegiance to James Joyce [an interest of Blish’s]. Among its themes: “the biological hypothesis that modern man is stuck with equipment (particularly mental equipment) which served well enough in the Neolithic Age but is of increasingly less use as man’s world multiplies in complexity.” (Which is a very contemporary observation.)

And Blish ends by noting that the New Wave is pulling itself apart, with all these writers going off in their own directions. (As they did.)