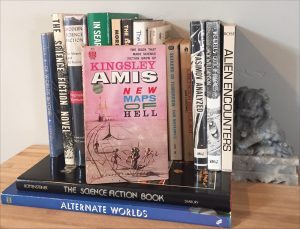 Next in my series of reading nonfiction books about science fiction, proceeding in roughly chronological order, is this short book of six essays, originally presented as lectures at Princeton in 1959 and collected into book form in 1960. It’s by an author who was at the time well known outside SF for a couple three satirical novels (e.g. LUCKY JIM), but had not written any SF himself. (Later, he would, an acclaimed alternate history novel called THE ALTERATION, which won the John W. Campbell Memorial Award in 1977, http://www.sfadb.com/John_W_Campbell_Memorial_Award_1977, over Frederik Pohl and Kate Wilhelm.) Because of his appearance as an outsider passing judgment on SF, as numerous notorious magazine essayists had done in the 1950s, Amis is quick to advise, in his very first sentence, that he’d been a devotee of the field since the age of 12. So he wasn’t a novice, or an unsympathetic outsider prepared to express snobbery about SF.

On the other hand, his discussions show such marked attention for certain authors, especially Frederik Pohl and Robert Sheckley, with barely passing mentions of others, like Isaac Asimov and Robert A. Heinlein, that you have to wonder whether his reading of the field was really thorough, or whether his tastes were so specific that he misrepresented the field as it has become to be known. Not necessarily relevant, but SFE advises that Amis was assisted by one Mark Rose (http://www.sf-encyclopedia.com/entry/rose_mark), a UC Santa Barbara academic who later wrote his own book, ALIEN ENCOUNTERS, published in 1981. I have that book too; it has more references in its index to Asimov, Clarke, and Heinlein, than to Pohl or Sheckley.

(I do not have a first edition of this book; I have the 1961 Ballantine paperback edition, shown in the pic, with its Richard Powers cover. I bought it used in 1978 and have read it twice now, so it’s about to fall apart.)

1, Starting Points. He compares SF to jazz, in that each form is somewhat disreputable, yet has a devoted audience. He defines SF as “that class of prose narrative treating of a situation that could not arise in the world we know, but which is hypothesized on the basis of some innovation in science or technology, or pseudo-science or pseudo-technology, whether human or extra-terrestrial in origin.” Then he discusses some of the very early examples of SF, as cited in L. Sprague de Camp’s SF HANDBOOK (read just previously and discussed here), but dismisses most for their “accidental similarities” to the modern genre; he might include Gulliver, but the first real SF writers were Verne, even with his bad writing and implausible themes, and Wells, who established several basic categories of SF, and wrote it for its own sake, not as allegory or satire.

2, The Situation Today. Gernsback, 1926, and how SF grew along with two adjacent fields: fantasy, and space opera. He describes the latter with reference to BEMs, van Vogt, Haggard, and Burroughs. Early SF was barely literate (he provides examples) and hidden behind lurid magazine covers. Now, in 1959, there are some 20 magazines, and 150-200 books each year. He describes the contents of a typical magazine, and then in detail the contents of the October 1958 Astounding, noting that all the stories involve some kind of moral concern and commit no grave offenses of style. Astounding has 100,000 subscribers, and the readers are attentive, in its letter columns. He discusses clubs, conventions, types of readers, types of writers; mentions SF in movies and TV briefly. And concludes that SF’s importance is that it is “a means of dramatizing social inquiry, as providing a fictional mode in which cultural tendencies can be isolated and judged.”

3, New Light on the Unconscious. He begins to examine SF (and fantasy) for how it reveals the wishes, hopes, and fears of its writers and audience – not the ideas of SF themselves, but the emotions behind them. First subject is sex: not much in SF, though in fantasy he discusses Charles Finney’s “The Circus of Dr. Lao” and two stories by Bradbury, “The Man Upstairs” and “Skeleton”. (Readers familiar with these works will note they are not about sex at all, per se, but about various horrors of the flesh which were perhaps the only ways writers could allude to sexual matters in the ‘40s and ‘50s; stories actually about sex would become frequent in SF within the next decade following Amis’ book.) Then, issues of doom, the end of the human race: stories by Clarke, Sheckley, Brown, Pohl, Bradbury, Heinlein. The dangers of technology: PKD, Sturgeon. And that theme’s counterpart, the nostalgia for a simpler past, as even in Anderson’s BRAIN WAVE but especially in the works of Simak, Wyndham, and Brown. He spends two or three pages on a story, “Of Missing Persons,” whose author he doesn’t even mention (it’s by Jack Finney). [This story evokes several Twilight Zone episodes on similarly nostalgic themes.]

He notes that in SF going into space isn’t about escape (alluding to the common charge that SF is escape fiction); it’s about being part of a larger positive goal of mankind to explore the universe. He discusses how SF has confidence, almost complacency, about the future; scientists are never at fault, but are always saving the day despite the politicians. There aren’t many artists in SF, and not much religion, but discusses those few (and famous) religious stories by Blish, Boucher, Asimov, and del Rey (and in a footnote, Miller’s CANTICLE). SF’s religious impulse seems more present in stories about super-intelligence or super-moral aliens; again Simak, with a long example.

4, Utopias 1. Sf as an instrument of social diagnosis and warning. Sex again: Wylie’s DISAPPEARANCE; works by Charles Eric Maine and John Wyndham. Colonization: works by Katherine MacLean and Poul Anderson. And politics: Simak, Heinlein, Pohl, Knight, Tenn. Van Vogt’s Null A, and Tenn’s Null P. Another Sheckley example, at length. And then a discussion of Bradbury, from one unnamed, to “Usher II”, to FAHRENHEIT 451, which Amis says is in ways superior to Orwell’s novel.

5, Utopias 2. Economic and technological issues. FAHRENHEIT 451 again; Mrs. Montag’s indulgences and neuroses. And then he gets to Frederik Pohl, whom Amis (notoriously, in the many reviews and discussions of this book following its publication) calls “the most consistently able writer science fiction, in the modern sense, has yet produced” (p102.3 in the Ballantine pb). He discusses “The Midas Plague” at length, for its inventiveness, and uses the term “comic inferno” to describe this and similar tales: “The Wizard of Pung’s Corners”; “The Tunnel Beneath the World”. He mentions that most SF writers don’t have much range; they keep plowing the same themes over and over, and then claims Pohl & Kornbluth’s THE SPACE MERCHANTS as having “many claims to being the best science-fiction novel so far.” (This was 1959.)

He cites Edmund Crispin to generalize that characters in SF are usually unexceptional, so as not to detract from the story, which is usually about human beings and other things, not about how human beings interact among themselves. And how SF is not so concerned with thematic resolution, as about identifying problems.

6, Prospects. Cosmic disasters are less popular than before, though he discusses John Christopher’s THE DEATH OF GRASS. He discusses Philip Latham’s “The Xi Effect” as an example of a story in which the idea is hero, and how SF is better at short length, while too many novels are padded. Among the few truly successful novels are Ward Moore’s BRING THE JUBILEE and Hal Clement’s MISSION OF GRAVITY. He discusses stories by Katherine MacLean, Poul Anderson, Chad Oliver.

He draws to conclusions. SF needs to consolidate what it already has. Bring sex into focus — but not with love stories. Avoid the horrible humor (citing Bretnor’s Feghoots). The field needs writers who are less rushed by deadlines, in order to write and revise more carefully. And it needs new authors who are not unfamiliar with general literature. (As with stories about sex, these would arrive in spades within the following decade.) And it needs fewer cranks, citing Campbell, Bretnor, van Vogt, and Hubbard. Some of this is happening, and he notes Golding’s LORD OF THE FLIES and a story by George P. Elliott as being SF stories by outsiders not identified as SF.

Finally, on the value of science fiction:

• “a medium in which our society can criticize itself, and sharply.” (e.g. how only in SF is the advertising industry so criticized)
• “a form of writing which is interested in the future, which is ready, as I put it earlier, to treat as variables what are usually taken to be constants, which is set on tackling those large, general, speculative questions that ordinary fiction so often avoids.”
• And in the final lines, how we “could do with more, not less, of that habit of mind which will look beyond the attempted solution of problems already evident to the attempted formulation of problems not yet distinguishable. That is the path which science fiction, in its faltering way, is just beginning to tread, and if it can contrive to go on moving in that direction, it will not only have secured its future, but may make some contribution to the security of our own.”

Given the book’s slightly disreputable reputation, I liked it better reading it again than I thought I would. I like the way Amis identifies the themes and motivations that underlie much SF (while being aware that much has changed since he wrote). He’s aware of previous commentators and is willing to disagree with them.

My biggest issue with the book, though, is its random selection of works cited. Amis clearly sees SF as most interesting for its satirical and dystopian values, thus his valuation of Frederik Pohl, and so cites his work and Robert Sheckley’s to a degree unwarranted by the judgement of history, or even common assessment of the time. Both were significant writers – indeed, Pohl took a break with editing during most of the 1960s, then came back as a more mature writer in the 1970s with GATEWAY and many others that followed, almost a book a year for some 20 years – but not as popular or as highly regarded as were Asimov, Clarke, and Heinlein, at the time. Furthermore, Amis often cites obscure stories to make some point, sometimes without bothering to mention their titles, or authors. This is cherry-picking, not a fair assessment of the field as it existed at the time.

There is also the occasional issue of Amis’ prose style, which is at times rotund; his background is literary, perhaps academic. He often avoids making some plain statement in preference to wrapping it in several layers of qualification. Here’s a sample from the last page, embedding one of the conclusions cited above:

…one is grateful that we have a form of writing which is interested in the future, which is ready, as I put it earlier, to treat as variables what are usually taken to be constants, which is set on tackling those large, general, speculative questions that ordinary fiction so often avoids. This is no less true when all allowance has been made for the shock and pain felt by some when they find these questions answered in a way that does much less than justice to their complexity. Most answers to anything are overwhelmingly likely to be crude, and I cannot bring myself to believe that the most saturating barrage of crude answers really menaces the viability of the sensitive and intelligent answer; if that were the way the world worked, it would long since have stopped working altogether. But perhaps this is just an instance of my own sentimental, science-fictional optimism, so I will go on to observe as coldly as possible that I must not be taken as implying that every writer of science fiction is hopelessly limed in crudity.

The main value of this book is that it was the first example of how science fiction was taken seriously by a literary figure who was respected outside SF.