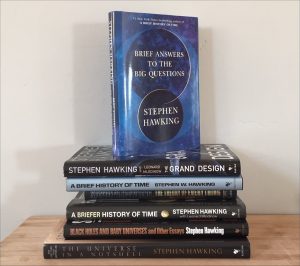 This is the lightest Stephen Hawking book you are likely to read. Published posthumously, it’s a set of reminiscences on 10 big questions compiled and edited from various speeches, interviews, and essays in Hawking’s personal archives, “completed in collaboration with his academic colleagues, his family and the Stephen Hawking Estate.” Thus they are not refined essays, they are occasionally redundant and repetitious, and they sometimes fail to provide direct answers to the questions in the chapter titles.

He discusses Aristarchus and the laws of nature. p28.6: Most people think of God as “a human-like being with whom one can have a personal relationship. When you look at the vast size of the universe, and how insignificant and accidental human is in it, that seems most implausible.”

The universe needs just three ingredients: matter, energy, and space. Where did they come from? Einstein’s insights led to the idea of the Big Bang. What caused that? Did God cause the universe to come into existence? No; nothing caused it; before the BB, time didn’t exist; there was no time for a Creator to have brought the universe into existence; it’s like asking for directions to the edge of the Earth. [That time began, so to speak, with the Big Bang was a key lesson in Hawking’s famous book A BRIEF HISTORY OF TIME. Furthermore, his remark there about knowing “the mind of God” was just a metaphor for understanding the laws of physics. Really.]

Hawking’s view is that no one created the universe; there is no heaven, no afterlife. These things are wishful thinking. We live on in our children, perhaps.

He discusses creation myths; Aristotle; Kant, who thought time was absolute. Only in the past century have we realized that the universe changes with time. And it cannot be infinite, or the sky would not be dark. The universe had a beginning, but not a few thousand years ago. We perceived the expansion; the steady-state theory was abandoned. Soviet theories of a bouncing universe supported their ideology; but they were proven wrong. In ’65 came evidence, the background radiation. Einstein’s was a ‘classical’ theorem, and clashed with observed uncertainty, and the conclusion that there are many possible histories. The anthropic principle ‘explains’ why some universal constants are the way they are, because if they were different, we wouldn’t be here to think about it. M-theory is currently the best candidate for a unified theory. It entails 11 dimensions, but only three in space—because otherwise we would not be here. Later satellite evidence of the cosmic microwave sky showed predictions of inflation. Will the universe end? It depends on the amount of matter, which may bring about a ‘big crunch’.

3, Is There Other Intelligent Life in the Universe?

Is there intelligent life on Earth, he asks. Notes how the evolution of the universe required time to bring about heavier elements. Given the age of life on Earth, it happened in about 1/14th of the time available, p75t. It took time for RNA, DNA; humans have entered a new phase, just in the past 10,000 years, and especially the past 300. We’ve reached the limits of knowledge: no one can absorb it all, p80t. we are now entering a phase in which we can self-design, with perhaps two kinds of humans [cf a theme in Harari’s books].

Have we been visited? Author prefers idea that intelligent life is out there, and we’ve just been overlooked. With cautions about sending out messages.

4, Can We Predict the Future?

Early science dealt in determinism, until the advent of QM. Prediction is stymied by complexity and chaos. Then Planck’s quanta, particle spin, Heisenberg uncertainty. Einstein wondered about hidden variables, but was wrong. We can predict combinations of position and speed—though perhaps not in a black hole.

5, What is Inside a Black Hole?

The idea of escape velocity was developed in 1783, and later the idea of collapsed stars from which nothing could escape, and the idea of a singularity. In 1963 quasars were discovered, whose energy was evidently gravitational collapse, 105t. Penrose, Wheeler. A black hole at the center of the galaxy. Hawking’s area theorem. Is information lost? Unsolved. The information paradox remains unresolved.

Discussion of geometry and measuring the curvature of space, its warp. Into the future, OK. Otherwise paradoxes arise. A ‘consistent solution’ would avoid the grand-father paradox. Or there might be alternative histories, an idea championed by David Deutsch. Or the Chronology Protection Conjecture: that the laws of physics conspire by prevent time travel on a mascroscopic scale, p140.

7, Will we survive on Earth?

Discusses the atomic clock; the many things that threaten the Earth—limited resources, global warming, nuclear war. Some catastrophe will likely cripple the planet within 1000 years. Notes that most depictions of the future (e.g. Star Trek) are of a perfected state where things aren’t still changing, but author finds this unrealistic. We will explore the complexities of our bodies and redesign humanity.

8, Should we colonise space?

Yes, despite the difficulties and challenges. One method is ‘Breakthrough Starshot’ whereby many tiny probes are sent out into space. It could detect a planet around Alpha Centauri within a few decades.

9, Will artificial intelligence outsmart us?

“Our universe has now awoken, becoming aware of itself. I regard it a triumph that we, who are ourselves mere stardust, have come to such a detailed understanding of the universe in which we live.” P183b. If there is no significant difference in how a biological brain and a computer brain works, then computers will eventually overtake us. P195: “Intelligence is characterized as the ability to adapt to change. Human intelligence is the result of generations of natural selection of those with the ability to adapt to changed circumstances. We must not fear change. We need to make it work to our advantage.”

P196: “Our future is a race between the growing power of technology and the wisdom with which we use it.”

“Einstein had the ability to look beyond the surface to reveal the underlying structure. He was undaunted by common sense, the idea that things must be the way they seemed.” Imagination, the need to understand how things work, good teachers. We are now retrogressing, “witnessing a global revolt against experts, which includes scientists.” What can we do? Today’s students will need to rely on science and technology more than ever before. The earth is becoming too small; we can move out into space. The rise of AI could be the best or worst thing ever to happen to humanity. People need to be scientfically literate to handle these challenges. Be curious, unleash your imagination.