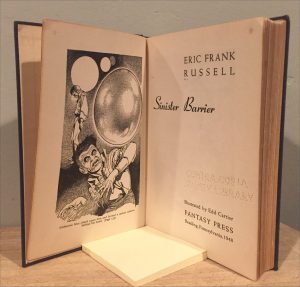 This is an early genre science fiction novel, first serialized in Unknown magazine in 1939, later revised and expanded and published in 1948 by Fantasy Press. I have the latter edition, in a used copy I picked up about six months ago at a bookshop in Oakland. (And this copy is a library discard, from the Contra Costa County Library, in a county inland from Oakland and including Walnut Creek and Mt. Diablo.)

I had two immediate thoughts as I read this novel – indeed, from reading just the first few pages.

First, none of the encyclopedia entries for this book – e.g. SFE, Wikipedia – indicate how execrably badly written this book is – at least, by modern standards. It’s awful, on a sentence by sentence basis. The prose is exaggerated, in a pulpish comic-book sense, and words are used helter-skelter, with too many words that don’t all go together in most sentences, that no careful writer would ever consider. Examples below.

Yet this was typical for much SF of its time – the 1940s and before, judging from what relatively little of it I’ve read. (Some Gernsback, some E.E. Smith; even the earliest Asimov stories had notes of the same pulpish prose.)

And so the second thought: when we read about how ‘literary’ critics of the ’50s and ‘60s sneered at science fiction as subliterary trash, we have to admit they were right in many cases. Obviously as we know they were most alarmed by the worst cases; if it’s SF, it’s not good, if it’s good, it’s not SF, as the refrain went. But you can understand their point if you go back and look at the more commonplace examples of the ‘30s, ‘40s, and ‘50s, works which were not considered unusual or harshly by readers at the time. (Except by critics like Knight and Blish, as I’ve noted in my summaries of their books, which is precisely what made those critics stand out.)

SINISTER BARRIER, despite its era and style, claims a certain significance in Sf history for its theme and for its popularity at the time. The 1948 Fantasy Press edition that I have – perhaps because the earlier 1939 serial was already well-known – even gives away the premise in the author’s foreword! Which is this: “we’re property.” That is, the human race is owned and manipulated by unseen beings, for their own purposes. And furthermore, virtually every mysterious event you can think of from throughout history – and here Russell draws heavily on the work of Charles Fort – can be explained as machinations of these unseen beings for the purpose of inciting violent emotions in humans, which is what these ethereal energy beings feed upon, or to prevent humans from detecting their existence. It’s the ultimate conspiracy theory SF novel. (A secondary premise of the book is that these energy beings may have cordoned Earth off from extraterrestrial contact, in effect saying “Keep off the grass.”)

The story begins, in the year 2015, with a series of similar incidents in which an eminent scientists abruptly go mad and commit suicide. Bjornsen; Sheridan, Luther, then Mayo, who leaps out of a building, and Webb, who fires futile gun blasts at the wall of his office before collapsing. We eventually gather that they have detected or suspected parts of this unknown control of humanity. But the prose interrupts.

Page 5 (the first page of the novel, about Professor Peder Bjornsen):

Raising his hands, he pushed, pushed futilely at thin air. Those distorted optics of his, still preternaturally cold and hard, yet brilliant with something far beyond fear, followed with dreadful fascination a shapeless, colorless point that crept from window to ceiling. Turning with a tremendous effort, he ran, his mouth open and expelling breath soundlessly.

Page 7b, about Doctor Hans Luther:

Carrying his deceptively plump body at top speed across his laboratory, he raced headlong down the stairs, across the hall.

Deceptively? (And of course the grammar implies the carrying extends to the stairs and hall, despite the first phrase.)

Leaving the window open, he searched hastily through the papers littering the dead professor’s desk, found nothing to satisfy his pointless curiosity.

Wohl refrained from further comment while he concentrated on handling his machine. William Street slid rapidly toward them, its skyscrapers resembling oncoming giants.

The street is moving?

Several times, for example 12.2, we have this said-ism:

Whizzing high over jagged points of the Rockies which speared the red dawn, the pilot levelled off. Graham gaped repeatedly as he suppressed more yawns, stared through the plastiglass with eyes whose utter bleariness failed to conceal their underlying luster.

OK then, this is antique, pulp SF. We already know the premise; how is it played out?

The story gets underway as a banker, Sangster — because his bank has funded Mayo and Webb in their research — assigns one of his men, Bill Graham – in a coincidence typical of pulp fiction, because he witnessed Mayo’s suicide jump – to investigate. Graham teams up with a police investigator, Art Wohl, and the story has them follow lead after lead, at first to find other scientists who’ve committed suicide, then about the strange combination of iodine and other chemicals on their bodies, to an asylum where the author indulges in some speculation about schizophrenics (p37). Graham is promoted to official government Intelligence, which entails him receiving an encoded identity ring. The next lead, about a Professor Beach in Silver City, Idaho, is frustrated by the abrupt destruction of the entire city.

The narrative alternates between car chases (an extraordinary one in Ch2 about two-wheeled gyrocars outmaneuvering old four-wheel ‘jalopies’ on a ‘skyway’ accessed by a corkscrew ramp from the surface, with passengers pressed back and forth sans seatbelts), and gathering evidence that research into expanding the range of human visual perception – the “sinister barrier” of the title – has revealed previously unseen creatures perceptible only via infrared. (This was long before astronomers devised instruments to see IR, UV, etc.).

The scale of electro-magnetic vibrations extends over sixty octaves, of which the human eye can see but one. Beyond that sinister barrier of our limitations, outside that poor, ineffective range of vision, bossing every man jack of us from the cradle to the grave, invisibly preying on us as ruthlessly as any parasite, are our malicious, all-powerful lords and masters—the creatures who really own the Earth!

(This is the one insight I give this story credit for – the idea that humans do not perceive everything there is to perceive. Cf. E.O. Wilson and many others. [But the conspiracy theories are nonsense.])

Once this discovery is made; what to do? The unseen manipulators, whom someone dubs Vitons, trigger the “Asian races” to start a world war, and much chaos ensues. (Reflecting racist attitudes of his time, Russell seems to think that Asiatic races are especially susceptible to suicidal group thinking – see page 49, with remarks about the Malaysians, the Japanese, the Hindus.) Then follow lots of scenes of bombings and mayhem, from the New York City setting. Later the Vitons abduct victims, rather than simply killing them, and return them to Earth as ‘dupes’ [in a prefiguring of stories like Heinlein’s Puppet Masters and Finney’s Invasion of the Body Snatchers] to kill suspect humans. These Vitons are telepathic, you see, but only over short distances, and they can’t distinguish one human from another, only whether a human has perceived too much and is dangerous to them.

Various experts are gathered to work on weapons to destroy the Vitons, and because of the Viton’s limited range of perception, they work in underground labs. Their progress is statused in passages of technical jargon. This was an era of SF in which it was still possible to appeal to readers’ understanding of optics or chemistry or radio electronics to justify the inventions the author imagines.

P201: “It was the iodine that made the difference. Methylene blue was the catalyst causing fixation of an otherwise degeneratable rectifier. He agreed that mescal served only to stimulate the optic nerves, attuning them to a new vision, but the actual cause was iodine.”

P239: “Here, a worker bent over a true-surfaced peralumin disk and silver-plated it by wire-process metallization. While his electric arc sputtered its rain of minute drops, another worker close by plated another disk with granulated silver by-passed into an exoacetylene flame and thus blast-driven into the preheated surface. Any method would do so long as there was someone capable of doing it with optical accuracy.”

Their efforts succeed, of course. The story ends as a method of destruction of the Vitons is discovered, and the world war evaporates.

Of course we can’t not notice the social attitudes of the era, as reflected in this book. There is a single female character in the book, a Dr. Harmony Curtis, introduced on p22 as the half-sister of the deceased Webb, who is met with leers between Graham and Sangster. Then p24:

Dr. Curtis had a strict, professional air of calm efficiency which Graham liked to ignore. She had also a mop of crisp black curls and a curvaceousness which he liked to admire with frankness she found annoying.

Later, p76, Graham tries to distract himself from Viton detection by thinking of her.

He drew a woman from his memory, let his mind enjoy her picture, the curl of her crisp, black hair, the curve of her hips, the tranquil smile, which occasionally lit her heart-shaped face. Doctor Curtis, of course. Being male, he had no trouble in considering her unprofessionally. She’d no right to expert status anyway; not with a form like that!

The war over, Graham and Harmony conclude the story. There is a genuine insight here, about a change in the human condition—

“Up there, Harmony, are the stars,” he continued. “There may be people out that way, people of flesh and blood like us, friendly people who’d have visited us long ago but for a Viton ban. Hans Luther believed they’d been warned to keep off the grass. Forbidden, forbidden, forbidden—that was Earth.” He studied her again. “Every worthwhile thing forbidden, to those folk who’d like to come here, and to us who were imprisoned here. Nothing permitted except that which our masters considered profitable to themselves.”

“But not now,” she murmured.

“No, not now. We can emote for ourselves now, and not for others. At last our excitements are our own.”

This echoes any number of conceptual breakthrough events in SF, in which the true nature of reality becomes available.

The final page quickly closes to a budding romance. (The Smith and Gernsback titles I’ve read ended in actual marriage!)

“Has it struck you that in the truest sense we’re now alone?”

“Her face turned toward him, her eyebrows arched.

“Maybe this isn’t the place,” he observed, “but at least it’s the opportunity!” He bent her across his lap, pressed his lip on hers.

She pushed at him, but not too hard. After a while, she changed her mind. Her arm slid around his neck.