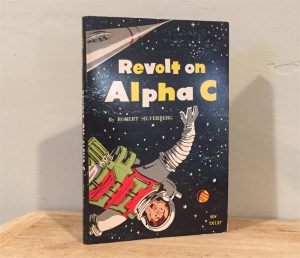 Robert Silverberg’s first novel was published in hardcover by Thomas Y. Crowell in 1955 and then went through many printings as a thin paperback edition from Scholastic Books; see http://www.isfdb.org/cgi-bin/title.cgi?2796 for a list of all editions, and cover images. I have the 7th, 1969 printing, that I bought from A Change of Hobbit bookstore on 31 March 1976. It’s a young-adult novel, by contemporary standards, in that it involves a young man finding his place in the world. It’s also remarkably ordinary, considering the heights that Silverberg’s literary career would later reach.

Gist: A new space patrol cadet takes his first interstellar trip to a planet of Alpha Centauri, where he learns that several of the Earth colonies there want freedom from Earth. When two of his friends defect to the rebels, and make appeals to the history of the American revolution, the cadet decides the right thing to do is to stay and help build a new planet, even though that means leaving the service, his father, and Earth all behind.

Take: An oddly political theme for a slender YA novel, though the book also has the standard adventure scene in an alien jungle, peril scene of being trapped out in space, and so on.

This entry was posted in Book Notes, Robert Silverberg. Bookmark the permalink.