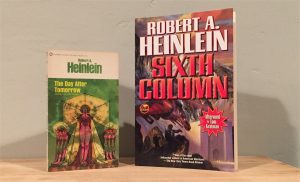 This was the earliest novel-length work by Heinlein, though it was serialized in Astounding magazine (Jan, Feb, and March 1941) and not published in book form until 1949, by which time two or three other Heinlein novels had been published as books. First published in hardcover under the magazine title, it was reprinted for many years in paperback by Signet under the blander title “The Day After Tomorrow,” a 7th printing of which I bought on 19 Sept 1971 at a discount big-box store in Northridge called Disco, with a Gene Szafran cover, shown above.

Also, it wasn’t Heinlein’s first fiction long enough to be serialized in multiple issues of a magazine; the novella “If This Goes On—” appeared a year before, in Feb and March 1940, and later included as the anchor story in the collection REVOLT IN 2011 in 1953. (I posted about that four years ago.) In both cases there are suggestions that the works were expanded for book publication; also, some sources call “If This Goes On—” a novel, but it was never published as a separate work.

Gist: The United States has been conquered and occupied by PanAsians. At a secret research center in the Rocky Mountains, an internal experiment has killed all but six men. Those six refine the experiment to create a device with various miraculous effects: vortex beams, tractor beams, and the ability to kill people selectively by race. They set up a phony religion to fly under the radar of the occupiers, spread to numerous cities, and use various strategies to humiliate and defeat them.

Take: Despite its deus ex machina plot (relying on the amazing effects of their invention) and an unavoidably racist depiction of Asian invaders, this is fairly riveting story that fulfills its improbable premise: to show how six Americans (with virtually magic powers) can defeat an invading occupation force.