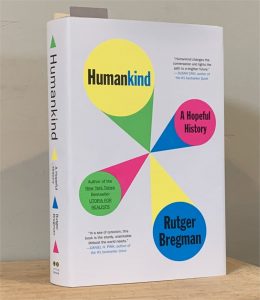 I do love lists, especially of principles, and a new one comes with a book called HUMANKIND: A HOPEFUL HISTORY, by Rutger Bregman, whose previous book was the provocative UTOPIA FOR REALISTS (which discussed, among other things, the idea of universal basic income). I haven’t read this new book yet, just done the preliminary inspection—glanced at the table of contents, glanced through the index for particular names and subjects, noted how substantiated it appears to be in some 50 pages of notes. Read the prologue. And of course read his epilogue, “Ten Rules to Live By.”

First, his thesis is that the common assumption is that people are bad and must be corralled and subjugated lest they run wild and civilization crumbles, is wrong. Rather, humans are good most of the time and should be given credit for being so. With that perspective, much about society could change.

OK, we’ll see. The premise does immediately evoke two ideas. First, the thinking in recent decades that the key skill that enabled humans to evolve and dominate the world isn’t, as was long thought, tool-making (as depicted, e.g., in 2001: A Space Odyssey), but sociability, the way humans (unlike other primates) cooperate with each other in groups and accomplish more than any individual could. (See E.O. Wilson’s books, especially The Social Conquest of Earth.) Such cooperative groups would be difficult if every person was “bad” and constantly looking for ways to cheat on others; the idea that most people are not like this is therefore plausible.

Second, religions invariably presume that humans are bad and must be repaired (a convenient thesis for maintenance of the clergy). The problem is “sin” – everyone is bad from birth! – and the solution is salvation (the need to be “saved”); or the problem is pride; the cure is submission (Islam); or the problem is chaos, and the cure is social order (Confucianism). And so on. These religious ideas are millennia old, and perhaps merely reflect issues that faced humanity as it abandoned the hunter-gatherer lifestyle in favor of fixed villages, for the support of agriculture and herding, and the consequent competition between such villages and thus instinctive suspicious of outsiders. Yet the growth over centuries of our species into a global culture has required cooperation, not knee-jerk demonization of others. Another reason religion is obsolete (but won’t go away). But I’m speculating; we’ll see where Bregman’s argument goes.

Anyway, I wanted to capture his “Ten Rules to Live By” and make some initial comments. These are in the epilogue beginning on page 381.

Bregman calls out Trump on #2; Trump thinks in order to win, the other side must lose. In fact, as Robert Wright described in NON-ZERO, and to parallel the idea of sociability and cooperation, the arc of history has been driven by non-zero-sum games, not Trump’s zero-sum games. Michael Shermer’s THE MORAL ARC describes a parallel path in the evolution of morality; granting oppressed groups equal rights doesn’t deprive anyone else of their rights (except where some, in the name of “religious liberty,” perversely insist on the right to deny rights to others).

The one that jumps out at me is #7, because I’ve been sounding this idea for a while. One reason many people think other people are bad, is because they’re always seeing people being bad on the news, especially on TV news. (Granted it’s ironic this book is being published just as “Black Lives Matter” protests have devolved into riots in so many places.) That’s because news shows what’s exceptional! I’ve said before something like, no matter how perfect society becomes, there will always be incidents that prove to some people that society is falling apart and needs a strong leader to make it great “again”… while all the evidence (Pinker, Rosling) is that, by any measure you can name, the world is a better place than it was 50, or 100, or 2000 years ago. And as I’ve also said before, it’s not that journalism is mendacious (well, some of it is); it’s a business, and you just have to understand its business goals and take them into account when consuming its product.

And my corollary to #7 is: Don’t get your news from social media!

I’ll expand on these ideas as I read through the book.

This entry was posted in Book Notes, Culture. Bookmark the permalink.