Jonathan Gottschall: THE STORYTELLING ANIMAL: How Stories Make Us Human 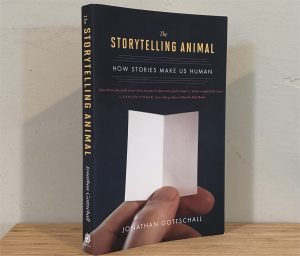 Here’s a nonfiction book from 2012 that I just read this past month. It’s one of three or four books I have (another is called HOUSTON, WE HAVE A NARRATIVE: WHY SCIENCE NEEDS STORY) that are about the idea of *narrative*, how humans think of everything in terms of story, of which the most basic example is cause and effect, and why we do so. Despite the fact that deep scientific theories about space and time reveal a cosmos that does not, in fundamental ways, behave in cause and effect ways. Thus the discomfort and dismissal of many to such theories, however validated they may be.

Summary with a few comments (with more comments at the end):

Ch1, “The Witchery of Story”. Children are creatures of story; they are always in Neverland. But story pervades adult concerns too, from pop music, dreams, daydreams, pro wrestling, opera, TV commercials. Trials are often matters of which side tells the better story. Gossip. Religious traditions. If there were two tribes, one practical, one story-telling, imagine how they spend their time, and which would win.

Ch2, “The Riddle of Fiction”. How children play pretend until a certain age. What are stories *for*? It’s an evolutionary riddle; like the human hand, it serves many purposes. Children’s play is deadly serious — always about trouble, about problems. The differences between boys’ and girls’ play is constant, despite attempts to disprove it. Among both humans and animals, play helps youngsters rehearse for adult life. That so many “children’s stories” (like those of the Brothers Grimm) focus on violence should ameliorate concerns about the violence in modern video games.

Ch3, “Hell Is Story-Friendly.” Stories about dangerous situations are more compelling than ordinary situations. Aristotle noticed this. Writers who’ve tried hyper-realistic stories in which no problems occur discover few readers are interested. Fiction is about conflict; this limits the skeleton structure of a story. The modernists (Joyce, Proust) tried to transcend the conventional story, but there’s a universal grammar in stories around the world, on a handful of master themes. Mirror neurons, discovered in the 1990s, show mental states are contagious. Pinker has suggested that stories equip us with a mental file of dilemmas we may one day face; or do their merely train an inner problem simulator?

Ch4, “Night Story.” About dreams. Why do we dream? Old ideas: messages from the spirit world; from the id. Do dreams sort memories, keeping some and discarding others? Or perhaps they are brain waste, with no purpose at all. In the 1950s it was discovered that kitties dream too. As in stories there are common themes in dreams; they involve important or threatening things in life. Yet, that we forget most of them suggests they are not worth much; as simulations they are seldom realistic.

Ch5, “The Mind Is a Storyteller.” Anecdote about Bill the King, in 1796, who lived an elaborate fantasy involving everywhere he knew and something called an air loom. He was a patient, a lunatic, and Bedlam. Such cases involve bizarre beliefs, outside forces, conspiracies. There is suggestive evidence of a connection between madness and creativity.

Ch 6, “The Moral of the Story.” About the Holy Books. Lots of stories. All religions in history rely on stories to convey messages. (Note 118b about how staunch believers would call the narratives of *other* religions are stories, but not their own scriptures.) “Religion is the ultimate expression of story’s dominion over our minds.” 119.3. Religion isn’t going away. The roots of spirituality must lie deep in human nature. How did this evolve? “How did dogmatic faith in imaginary beings not diminish our ability to survive and reproduce?” 120.3 The standard explanation is that we invent gods to give meaning to existence; we abhor explanatory vacuums. Some, like Dawkins and Dennett, consider religion a mental parasite best lived without. Others think religion is not useless or worse. David Sloan Wilson (in Darwin’s Cathedral, 2002) speculates that religion makes societies work better. It defines the group. It binds people together and puts the group’s interests ahead of their own (Nicholas Wade, The Faith Instinct). What seems irrational in religion makes sense given what such beliefs cause people to do. Assert their group’s interest against competitors. [[ basically, group selection ]] Yet—it also drives people apart.

About David and Donald, drunk and on drugs… 20 years later he writes his memoir and the two disagree on a key event. People remember what they can live with. James Frey. Other examples. Most memoirs have clear story grammar, 161t. Problem structure, good/bad guy dynamics. Our own life stories are personal myths about who we are, how we got that way, what it means. A life story is a useful fiction.

Are we leaving Neverland behind? Is fiction losing its central place in our culture? Theatre, poetry? Scripted TV? Is gaming taking over? Some think so. Yet tens of thousands of novels are published every year. JK Rowling. Left Behind. Et al, 179t. Literary novels have always had a harder time of it. Even if novels fade, the story would not end. Poetry has given way to song, rap, hip-hop. Video games are intensely story driven.

Or: we can make nutritious choices, p198-9, summarized:

Again, the most abstract SF (Olaf Stapledon? Some of Egan and Chiang?) is unsatisfying to some because it *doesn’t* provide the emotional payoff of the traditional story… note 199.2: “People don’t go to story land because they want something startlingly new; they go because they want the old comforts of the universal story grammar.” –Well, I’d say, you find the entire range among science fiction readers. There are the conservative ones who want plain stories with beginnings, middle, and ends; and at the other extreme (e.g. in the 1960s “New Wave”) you had writers and readers utterly bored with all that, looking for something new and exciting.

I didn’t anticipate that the narrative drive (sometimes considered a fallacy) would lead to conspiracy theories, but I should have: in this context, conspiracy theories are the tendency to make sense of the world by perceiving cause and effect gone carcinogenic. I hadn’t appreciated how there are conspiracy theories about virtually every well-known person and event, but am not inclined to speculate why. Not worth the trouble.

This entry was posted in Book Notes, Narrative. Bookmark the permalink.