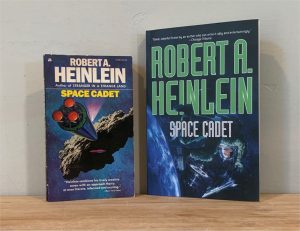 This 1948 novel was the second of the so-called “Heinlein juveniles,” what would today be called Young Adult novels, that Heinlein published beginning in 1947, running one a year for a dozen years, with one last one after another five years.

A young man joins the Interplanetary Patrol, its base in Colorado, where he undergoes training there and in orbit, then participates in two space missions, one to find a missing ship in the asteroid belt, the second to subdue an apparent native revolt on Venus.

This is a really good book, imaginative and clever and even moving, though it falls apart near the end with outrageous coincidences and implausible deus ex machinas (noted below with the exclamation points).

In 2075, Matt Dodson arrives at Terra Base in Colorado to train to be a cadet in the Interplanetary Space Patrol. He meets other candidates; they undergo various tests; then are launched into orbit to the Terra Space Station. They’re educated via hypnosis and learn how to maneuver in free fall. He passes the tests for cadethood and departs for Moon Base, then leaves on a mission to the asteroid belt to find a missing ship, the Pathfinder; it’s found, its crew dead of a freak accident. They find evidence the asteroids was inhabited and destroyed by nuclear war. On the trip home they divert to Venus to check out reports of a native uprising, and as they land their ship tips over into the mud. They discover the skipper of an earlier ship, Burke, who caused the ruckus by kidnapping one of the aliens in his search for trans-uranium elements. The cadets negotiate with the local aliens and are shown an even earlier ship, from 1971 [a century before], presumed lost yet somehow preserved. They manage to get it working (!) with fuel and oxygen provided by the natives, who apparently can duplicate anything (!). They return to the cadet ship in Earth orbit, having only done what is expected of Patrolmen.

First of all, as I’ve been rereading classic SF, both novels and story collections, in recent years, I often buy a new edition of each book, especially if the one I originally read years ago was a mass market paperback. Such paperbacks of the ‘60s and ‘70s were usually compressed affairs, with tiny print (compared to hardcovers) to keep the page counts down and thus cost low. For this book I found a 2005 Tor/Orb trade paperback edition, with a nice impressionistic cover illustration by Vincent di Fate. Unfortunately, the quality of the print itself was poor, as if offset; just slightly blurry. So I read the old Ace edition instead (left in photo) and so the page references here are to that. The two editions are virtually the same page count, but somehow they don’t quite align, so the page references here will only get you to within a page or two of the same passage in the Orb edition.

Remember this was published in 1948.

As I reread Heinlein, I’m trying to be attentive not just to political and social opinions, but also the implied background. Thus here there are ties to Heinlein’s future history, with references to the atomic wars of a century ago, etc. And how this Federation, and the Patrol, is a peace-keeping organization, not any kind of military.