Andrew Shtulman: SCIENCEBLIND: Why Our Intuitive Theories About the World Are So Often Wrong 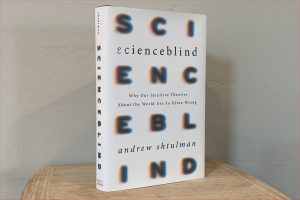 Here’s a book I read earlier this year and am only just now boiling my notes down into a coherent summary. (Well actually I started boiling my notes down but ended up just cleaning up the remainder, and added a summary at the top.) The subject here is supplemental to, not quite the same as, various books about cognitive errors, perceptual illusions, and so on; but it does align with those in examining ways our naïve “common sense” takes on the world are so frequently wrong. The focus in this book is how we come up with “theories” of how the world works in the first place.

The baby-faced (judging from the jacket photo) author is a professor of psychology at Occidental College (in LA), and the book has blurbs from Steven Pinker and Michael Shermer.

Going into this, I thought about the most common examples of how intuitive thinking is wrong. First, the notion that heavier objects fall faster than lighter ones. Trials would be foiled if lighter objects are subject to friction with the air, so you can see how people would think this. (Didn’t the Apollo astronauts on one trip do this demonstration in the vacuum on the Moon?) The second example is the notion that something that slides off a table, or that’s shot into the air and reaches a high point, falls straight down. We don’t take into account the object’s sideways momentum….

So to the book. Shtulman has handily provided summaries to each section capturing each chapter’s theme. Some of these intuitive theories, or misunderstanding about the real world, are features of childhood development that can be overcome; others are persistent even in adults.

Now what he doesn’t address are the way these ideas affect storytelling, especially in Hollywood movies (about how car crashes always end in explosions) and especially in almost all science fiction (why the Enterprise swooshes audibly as it streaks past the camera). Perhaps this is a separate subject, but this is where I see his subject overlapping with my study of SF.

Chapter 1: Why We Get the World Wrong

Ch6, Cosmos (i.e., what is the shape of our world? What is its place in the cosmos?)

Ch7, Earth (i.e., why do continents drift? Why do climates change?)

Ch8, Life (what makes us alive? What causes us to die?)

Ch10, Inheritance (why do we resemble our parents? Where did we get our traits?)

Ch11 Illness (what makes us ill? How does illness spread?)

Ch12 Adaptation (why are there so many life-forms? How do they change over time?)

Ch13 Ancestry (where did species come from? How are they related?)

14, How to Get the World Right