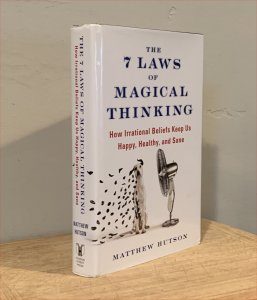 Yet another book about irrational beliefs and cognitive illusions! After the ones by Shermer, Duffy, and Rosenberg just discussed. The difference from all the others with this one, is that it takes a counter-intuitive, playful stance. Give in to your irrational beliefs, Hutson says, at least superficially, at least in some corner of your mind. You’ll be happier! And you can retain your rational understanding that these beliefs aren’t actually true, if pretending they’re true calms your nerves.

In other words, learn to harness, not eradicate, cognitive dissonance.

The author is a journalist, an editor at Psychology Today, and has only ever written this one book. He doesn’t even have an entry at Wikipedia.

This is a book replete with examples that illustrate just a few – well, seven – themes. So even though I took 6100 words of note as I read the book last year, I’ll boil them down here to those seven themes. The themes range from, at the beginning, relatively mundane superstitions, to, by the end, heavyweight topics about immortality, gods, and destiny.

(I note that Frank Wilczek’s recent book boiled these themes down to just two, in the passage from page 64 quoted at the bottom here: http://www.markrkelly.com/Blog/2021/01/30/notes-and-quotes-frank-wilczeks-fundamentals-ten-keys-to-reality/)

Ch2, Symbols Have Power: spells, ceremonies, and the law of similarity

Ch3, Actions Have Distant Consequences: using superstition to make luck work for you

Ch4, The Mind Knows No Bounds: psychokinesis, ESP, and transcendence

Ch5, The Soul Lives On: death is not the end of us

Ch6, The World Is Alive: animals, objects, and gods are people, too

Ch7, Everything Happens for a Reason: you’ve got a date with destiny

Epilogue: The World Is Sacred: a stab at a secular spirituality

I wish the author had been more specific about in advising readers how to *use* these biases to one’s own advantage. They’re summarized in a page or so at the end of each chapter, or presumed to be apparent.

Still, the theme is crucial – how we recognize the ways in which we think are not ‘accurate’, not about ‘reality’, but exist for survival value – yet at the same time, we can *think around* these biases in order to perceive an ‘actual’ reality, however unpleasant it might seem. This is what science fiction helps us to imagine.

But the book’s point is that you don’t want to escape magical beliefs entirely, or you will lose purpose and meaning. It doesn’t say to give up and give in either. I think the balance is to understand why these illusions exist, and to simultaneously interact with the universe as it actually is.

He mentions the ‘law of truly large numbers’ – this is what I’m trying to pin down in my rule about people not understanding vast stretches of time or space.

For years I’ve recalled the line I just used about “thinking around the problem” – that is, understanding biases and, through conscious, critical thinking, understand why those biases exist and to distinguish them from what we can understand is real – and haven’t remembered where I heard or read it.

Coincidentally, just a few days ago, as I had planned to post this summary, the identification of the phrase came to me. It’s an REM song, “Fall on Me,” an early song with one of those almost creepy, steadily amplified melodies.

We have found a way to talk around the problem.

This is what all these books about perceptual biases are about: identifying how humans, evolved over millions of years to survive rather than perceiving reality accurately, can think around those biases, and understand what is real, and not what we imagine reality to be.