Notes and Quotes: Ray Bradbury on Good, Evil, and Knowledge

Bradbury, SOMETHING WICKED THIS WAY COMES (1962) 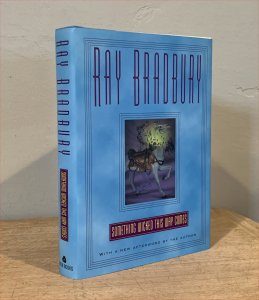 When I read or reread some two dozen Ray Bradbury books three years ago, in January and February 2018, I skipped this 1962 novel (despite it being one of only two genuine novels written to that date, or perhaps the only one, since the other of the two was an expansion of an earlier novella), because I was reading Bradbury for his fantastical takes on science fiction themes, and this novel is about as pure fantasy as you can get. But I finally picked it up a couple weeks ago and read it through. (Using the 1999 Avon hardcover edition shown here.)

It’s the ultimate evil circus story. It contains Bradbury’s most effusive, poetic language. And I found the thematic core of the novel, discussed over just five pages about two thirds of the way through, fascinating and compelling enough to type out several paragraphs to post here.

If men had wanted to stay bad forever, they could have, agreed? Did we stay out in the fields with the beasts? No. In the water with the barracuda? No. Somewhere we let go of the hot gorilla’s paw. Somewhere we turned in our carnivore’s teeth and started chewing blades of grass. We been working mulch as much as blood, into our philosophy, for quite a few lifetimes. Since then we measure ourselves up the scale from apes, but not half so high as angels. It was a nice new idea and we were afraid we’d lose it, so we put it on paper and built buildings like this one around it. And we been going in and out of these buildings chewing it over, that one new sweet blade of grass, trying to figure out how it all started, when we made the move, when we decided to be different. I suppose one night hundreds of thousands of years ago in a cave by a night fire when one of those shaggy men wakened to gaze over the banked coals at his woman, his children, and thought of their being cold, dead, gone forever. Then he must have wept. And he put out his hand in the night to the woman who must die some day and to the children who must follow her. And for a little bit next morning, he treated them somewhat better, for he saw that they, like himself, had the seed of night in them. He felt that seed like slime in his pulse, splitting, making more against the day they would multiply his body into darkness. So that man, the first one, knew what we know now: our hour is short, eternity is long. With this knowledge came pity and mercy, so we spared others for the later, more intricate, more mysterious benefits of love.

So, in sum, what are we? We are the creatures that know and know too much. That leaves us with such a burden again we have a choice to laugh or cry. No other animal does either. We do both, depending on the season and the need. Somehow, I feel the carnival watches, to see which we’re doing and how and why, and moves in on us when it feels we’re ripe.

Have I said anything I started out to say about being good? God, I don’t know. A stranger is shot in the street, you hardly move to help. But if, half an hour before, you spent just ten minutes with the fellow and knew a little about him and his family, you might just jump in front of his killer and try to stop it. Really knowing is good. Not knowing, or refusing to know, is bad, or amoral, at least. You can’t act if you don’t know. Acting without knowing takes you right off the cliff. God, God, you must think I’m crazy, this talk. Probably think we should be out duck-shooting, elephant-gunning balloons, like you did, Will, but we got to know all there is to know about these freaks and that man heading them up. We can’t be good unless we know what bad is, and it’s a shame we’re working against time. Show’ll close and the crowds go home early on a Sunday night. I feel we’ll have a visit from the autumn people, then. That gives us maybe two hours.

The Wikipedia post about this book is very thorough.

It’s curious that Bradbury suggests that gossip is the root of all evil. In fact recent ideas about the evolution of social groups in human history suggests that gossip is useful, even crucial, as a means of monitoring the moral status of members of the tribe. (Once tribes become communities and towns, where gossip can’t keep track of everyone [the limit for any one person seems to be about 150], laws and regulations take over.) Actually, I suppose, he doesn’t implicate gossip itself, so much as the pleasure people take in learning about the misfortunes of others (schadenfreude).

And the main point of the second big quote above is that compassion and understanding come from getting to know other people, especially others not like yourself. This is why, compared to small rural towns, people who live in big cities, those that are melting pots of people from many cultures, or as in port towns where the residents encounter people from other cultures, tend to be more liberal, and arguably more compassionate.

And I appreciate the general theme that civilization, that mercy and compassion, arose from knowledge, from being aware of life and death. And that acting morally depends on knowledge. That “not knowing, or refusing to know, is bad.” Applies to all sorts of science denial in our modern age.

This entry was posted in Book Notes, Ray Bradbury. Bookmark the permalink.