Carl Sagan: The Dragons of Eden: Speculations on the Evolution of Human Intelligence. Random House, 1977.

This was Sagan’s first book since his 1973 hit The Cosmic Connection (revisited here), and is distinctive in two ways. First, it was the first solo book of his to be written through, as a book, rather than a compilation of earlier articles or an anthology of pieces by others. Second, it was on a topic adjacent to the fields he was best known for, as the subtitle indicates. He admits this in his intro, justifying his theme by suggesting how the lessons of biology, in particular evolution, can not only suggest how humanity might proceed into the future, but how this might inform his special interest: the search for extraterrestrial life (SETI). 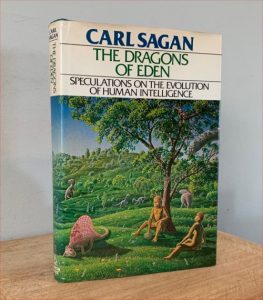 I have the first edition and read it when it came out, then reread it a couple years ago ago after seeing it the sole Sagan title listed in an ambitious, and well-informed, book by James Mustich called 1,000 Books to Read Before You Die: A Life-Changing List (2018). (Really? This one? Not Cosmos or The Demon-Haunted World?)

I’m going summarize the book’s chapters in bullet points, because much of the material is familiar from readings in basic evolution and need not be detailed here again.

I was rather underwhelmed by the book rereading it recently, only partly because so much of it is basic and well-known. Perhaps I was expecting more speculation about the nature of alien intelligence. But he goes there only to suggest that the existence of other intelligences shows that it’s possible for advanced societies to live with advanced technology. (The idea that they can’t is one of the solutions to the Fermi paradox.) Sagan spends most of the book showing how the understanding of the brain, especially as it’s constructed of three layers, explains much of human behavior and society (and the political divide, alas). Sagan’s conclusion about the future of human intelligence is that it’s a partnership between intelligent humans and intelligent machines.

It is only in the last day of the Cosmic Calendar that substantial intellectual abilities have evolved on the planet Earth. The coordinated functioning of both cerebral hemispheres is the tool Nature has provided for our survivial. We are unlikely to survive if we do not make full and creative use of our human intelligence.

“We are a scientific civilization,” declared Jacob Bronowski. “That means a civilization in which knowledge and its integrity are crucial. Science is only a Latin word for knowledge… Knowledge is our destiny.”