This is one of Wilson’s last four or five books, the first one following The Meaning of Human Existence in 2014. These books seem slighter that most earlier Wilson books, but this one has an especially striking theme: that to prevent mass extinctions, to preserve the Earth’s biodiversity that humanity’s survival depends on, we must save half the planet’s land-surface from human development. Keep it wild. 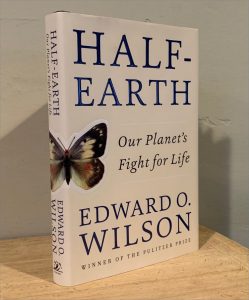 The idea sounds audacious but is not as implausible as it might sound, since large swaths of Earth’s land surface are unsuitable for human development anyway. He does not advocate splitting the planet down the middle, or any other such simplistic scheme. And in the six years since the book has been published, its ideas have gradually crept into the common currency of environmentalists and preservationists. E.g. here’s Kim Stanley Robinson in the Guardian: Empty half the Earth of its humans. It’s the only way to save the planet in 2018.

Part I, The Problem

3, How Much Biodiversity Survives Today?

4, An Elegy for the Rhinos

7, Why Extinction is Accelerating

8, The Impact of Climate Change: Land, Sea, and Air

9, The Most Dangerous Worldview

12, The Unknown Webs of Life

15, The Best Places in the Biosphere

The human species, of course, has an evolutionary history, which reaches very far back in time beyond traditional recorded history. We, too, are the twig-end of a phylogeny. The multitudinous stories of human cultures are epics in the usual sense, but you will understand that the traits of human nature that have molded these stories are also products of evolution. … This is the reason that history makes no sense without prehistory, and prehistory makes no sense without biology.

19, Half-Earth: How to Save the Biosphere

If people are to live long and healthy lives in the sustainable Eden of our dreams, and our minds are to break free and dwell in the far more interesting universe of reason triumphant over superstition, it will be through advances in biology. The goal is practicable because scientists, being scientists, live with one uncompromising mandate: Press discovery to the limit. Hand the baton from one to the next, if necessary, but never let the effort die.”

Despite all of our pretenses and fantasies, we always have been and will remain a biological species tied to this particular biological world. Millions of years of evolution are indelibly encoded in our genes. History without the wildlands is no history at all.

We have come a very long way through the barbaric period in which we still live, and now I believe we’ve learned enough to adopt a transcendent moral precept concerning the rest of life. It is simple and easy to say: Do no further harm to the biosphere.