Subtitled, “Misconceptions and Misuses Revealed, from Astrology to the Moon Landing ‘Hoax’” Published in trade paperback by John Wiley & Sons, 2002. 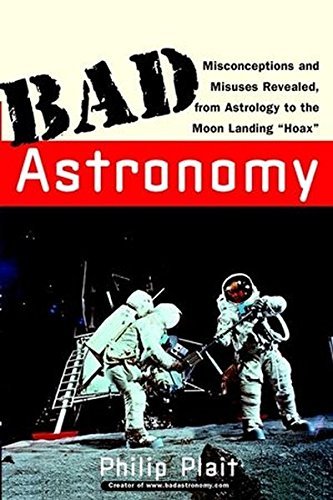 Plait is a blogger, writer, skeptic, and TV personality whose blog was called Bad Astronomy (since discontinued, or rather relocated to the SyFyWire website, though I can’t tell without creating an account whether it’s still active). He popularized explanations of astronomical ideas commonly misunderstood, as well as debunking common astronomy-related misconceptions that verged on pseudoscience. His first book, here, had the same title as his blog, and seems to be written as a piece, not an assemblage of blog posts.

I read this in 2015 without taking notes; I’m flipping through it again in a sort of “inspectional” read, or browse, to document its main topics.

Looking the book up on Amazon just now shows a slightly different cover illustration – see on this page — than the cover of the first edition from 2002, which is what I have, and is shown above.

This triggered me to check my database to see when and where I bought my copy, and how much I paid.

I bought it on 25 March 2015 at Iliad Books in Burbank, on one of my last runs to that grand shop to sell off books as we were moving from LA to the Bay Area and I was downsizing my library. On that date I took a last few boxes of books to sell that evening, around 7pm, and while they unpacked, sorted, and evaluated my books, I wandered around the shop and found three books to purchase, or trade against the books I was selling. Their price for this book, written in pencil on the first inside page, was $7.50.

A quick search on Abebooks shows new edition first edition copies (even though the wrong cover image is shown) for $20 or so.

So this book covers all or most of the common misconceptions and pseudo-scientific beliefs related to astronomy.

My one beef, which is why it’s not my ideal book on this topic, is that it begins rather lamely. Of all of the topics a book like this might cover, it begins with a supposed controversy about whether eggs can be stood on their ends on the spring (vernal) equinox. (Answer: the date doesn’t matter; they can be, anytime.) And the next chapter is about how water swirls down a toilet or sink in the northern vs. the southern hemisphere.

I think these are trivial matters compared to the much more common astronomical misconceptions. These are my favorite two:

Ask the proverbial person on the street, and they will almost invariably give you wrong answers. (The Earth is closer to the sun, e.g.) In particular, most people don’t realize that the moon is in the sky half the time, day or night, whether it’s noticeable or not.

(Dismissing for now the far deeper-misunderstanding of some other folks, that Plait doesn’t cover. I saw something on Facebook about how some person didn’t believe that other “planets” were real things; she thought they were just made up for movies and TV.)

Yet the book is invaluable for covering these and many other topics:

So, good book, if not ideal. I think there is still a vast misunderstanding by most of the population about the very concepts of stars and planets, or comets and meteors, of galaxies and nebula, and how all of these are completely different things, vastly different in term of size and scope and distance. But does it matter, or need to matter, to most folks? No.

Today I applied for Social Security. I am 66 1/2, exactly within a few days. I will be getting a bit more each month than my pension, which was established back in 2013 when I was laid off.

Much news in the past couple days, about war in Europe. Post about this tomorrow.

This entry was posted in Astronomy, Book Notes, Personal history. Bookmark the permalink.