A few more notes, and quotes. 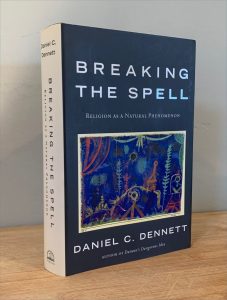 There are four appendices at the end of the book, covering 50 pages.

Appendix A: The New Replicators makes the elementary point that “natural selection” is substrate neutral. It’s not just a biological process. It occurs whenever three conditions are met: 1) replication; 2) variation (mutation); and 3) different fitness (competition). DNA is one substrate; words are another, that can eventually give rise to other languages. Computer viruses and memes are others.

Appendix B: Some More Questions About Science is more substantial

1, an invitation to an investigation

People are entitled to declare their religion to be the only true religion, and to refuse to defend that belief. But this places them outside investigation. Some may do so out of loyalty to their religion.

Even so, isn’t one curious about why all those other religions are so popular around the world? Wouldn’t you like your religion to replace theirs? Then you should be interested in how your religion looks to an outsider.

Some believe democratic states are the best ‘lifeboats’ for improving human welfare. Others would choose transnational religions, over one’s country. Doing this makes one’s religious tribe more important than one’s country. Others accept the rule of secular law as a bargain. The situation is similar to “what’s good for General Motors is good for the country”, a suspect statement on the face of it. Supporting secular society only to the extent it supports you religion makes you part of the problem. Declining investigation postpones indefinitely any kind of resolution. We don’t let scientists say “if you don’t understand my theory, it’s because you don’t have faith in it”.

Apologetics is “the rational defense of faith”, and has tended to manipulate evidence to support desired conclusions. Dulles (2004) says the way to defend faith is through testimony—rather than scientific; you just trust your “witnesses”. Thus it’s impolite to question a witness. Scientific methods are useful in some areas, not in others. Author says this is cherry-picking, and it is a scientific sin.

So witnessing works in some circumstances and it gets replicated. But it’s hardly effective at bringing in converts.

2, what pays for science?

How do we understand the existence of science in evolutionary terms? What desires does it satisfy? Curiosity, knowledge for its own sake?

Basic answer is curiosity of the world we move through, investigating especially things that move, cautiously. Other animals are curious about their environment only to the extent it serves their needs.

Once language developed we became not just curious but inquisitive. The reflexive move of doing the science of science, the history of history, etc, enables you to pit ideas against other ideas and gradually refine what you think are good ideas.

Science became self-critical only a few thousand years ago, about the time organized religion formed, and with writing. They even collaborated for a long time… up until the dawn of modern science in the 17th century. Warfare spurred development of weapons, etc. Until now it has transformed the planet like nothing else in the last 65my.

Some critics have charged that science isn’t a reliable source of truth. But even those critics fly on airplanes and move through life every day counting on devices and medications to work. But what about controversies, and scandals and frauds? Because scientists are just human, and the process depersonalizes their results, and unreliable work is weeded out. The arguing at the cutting edge of science has an enormous weight of accumulated results behind it.

3, putting ideology in its place

So what is ideology? Thinking that is pathological or bad for us in some way. Or perhaps, ways of thinking that help maintain unjust social conditions. Here’s a difference between hard and social sciences: the latter are in part about how people live. There is a common idea of imperialist universalism—a set of norms and rights that should be spread to every society. The alternative is moral relativism. Of course, different cultures have different ideas about the universal norms and rights; so some kind of moral relativism is inescapable, at least among anthropologists. There may be moral truths, but we can’t assume we know what they are. There may transcendental values that can only be approximated….

P4m: “Our ability to devote our lives to something we deem more important than our own personal welfare—or our own biological imperative to have offspring—is one of the things that set us aside from the rest of the animal world.”

P15t: “For many people, probably a majority of the people on Earth, nothing matters more than religion. For this very reason, it is imperative that we learn as much as we can about it. That, in a nutshell, is the argument of this book.”

From ch5: “The plots of all literature hinge on the fact that different people have different sets of information.”

The third if these is so commonplace I’d be surprised if Dennett invented it himself; he attributes it to “anonymous”; some attribute it to Feynman.