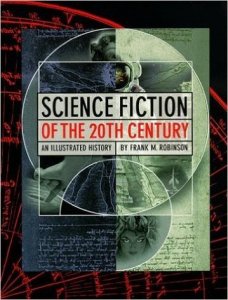 I’m beginning to explore and read or reread various histories of science fiction. Robinson’s is a coffee-table book, published in 1999, that had sequels from the same publisher about fantasy and horror, by different hands: Randy Broecker and Robert Weinberg, respectively. They are all heavily graphic, the text arranged around pages of cover images of (mostly) magazines and (incidentally) books, since the histories of these genres was born of the pulp fiction magazines in the era before television, and genre books.

Thus, while this volume is indirectly a history of science fiction, it’s focused largely on the history of the early sf magazines. Unlike any other history or overview of science fiction you might see – the more popular of which focus on SF in media, movies and TV – Robinson’s book has eight chapters about various incarnations of magazines, only two about books (paperbacks, and then hardcovers), and just one about movies and TV.

It’s a beautiful book, with impeccable images of magazine and book covers – it’s hard to imagine that these might be scans of actual books; they look too perfect. The text around these covers focuses on the histories of these magazines – e.g. this title ran for two issues then expired; this editor ran four magazines at the same time; this magazine was edited by so-and-so but was not the same magazine as this other one by the same title published in Britain, etc. – and details page counts, paper stock, the size of the magazine, what kinds of ads they ran, the colors used on the covers…and then, almost incidentally, the authors who were published in those magazines. At the same time, the occasional mentions of those authors is frequently revealing, how famous stories by, e.g., Arthur C. Clarke (“The Sentinel”) appeared in obscure magazines that last only a couple issues.

Robinson, obviously a collector of these magazines not just SF/F genre, also published a similar coffee-table book, Pulp Culture — which I also have on my shelves, and will eventually peruse through. And Richard A. Lupoff, apparently Robinson’s editor for this book, published himself a volume called The Great American Paperback, in 2001 – another volume on my shelves, which I will eventually peruse.