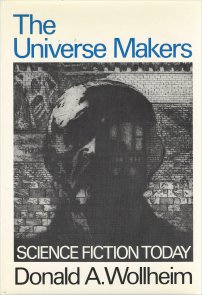 Donald A. Wollheim’s The Universe Makers, published way back in 1971, is one of the earliest books that could be described as a history of SF, though Wollheim’s take is distinctly personal and even partisan. Wollheim was an occasional writer but mostly an editor throughout his career, an editor for the paperback publisher Ace in the ‘50s and ‘60s, later founding his own imprint, DAW [his initials], in 1972, which is still going strong after 40+ years under the direction of his daughter Betsy Wollheim.

In this book Wollheim discusses, in the first chapter, how his relationship with science fiction reached a sort of culmination with an invitation to participate in a radio program to discuss the dropping of the first atomic bomb [in 1945]… and he could not bring himself to do it. It was too momentous an occasion, such a shock to what science fiction had been anticipating, in the most awful manner.

I first read this book from a library shortly after its publication in 1971, then bought a copy from the lamented Dangerous Visions bookstore in 1989, and read it again in 1993. It’s a slim hardcover volume, spanning only 122 pages, including the index.

I picked up this volume again this week, partly because of my survey of histories of SF, and partly because of my recollection of Wollheim’s characterization of a consensus ‘future history’, what he calls a “Cosmogony of the Future”, in chapter 9, which has these eight parts:

Wollheim makes the case that this was, at least for the decades through the mid-1960s, a consensus, presumed, future history, in which to one degree or another, the majority of science fiction – especially stories published in John W. Campbell’s Astounding / [retitled in the early ‘60s] Analog, and at least many of the SF novels to that time, were set. Wollheim takes this as a thesis for his entire book, characterizing authors who ascribed to this framework as “universe makers”, and responding differentially to various challengers.

(Thus Wollheim’s project is closer to my own than I had remembered, the main difference that my plan is to be systematic in a survey of core SF texts rather than picking and choosing those that support a pre-determined thesis.)

Thus: he begins his story with Verne and Wells, Verne being nationalistic and technology oriented, Wells being utopian and idealistic. Wollheim swiftly tracks this dichotomy to his current day, describing the editor of Analog [he does not name him, but it’s John W. Campbell, Jr.] as the descendant of Verne: “whose editorials, which dominate the magazine and color its contents, reflect a similarly small-minded nationalist thinking, whose stress is on gadgets and inventions, and which consciously reject Utopianism and the change of ‘human nature’ to adjust to changing technologies and infinite worlds.” And points out his [Campbell’s] “arguments in favor of slavery (Yes, I said slavery!), and insists on the deliberate revision of stories to include statements of the right of financial greed to triumph over idealistic ideas.”

After Verne and Wells, Wollheim identifies Ray Cummings as the writer who bridged the gap between them and the formalization of SF in the pulp magazines beginning in 1929 or so. [Cummings is virtually forgotten today, except as a curioso with his book The Girl in the Golden Atom, whose premise was that atoms are miniature solar systems.)

Wollheim goes on to identify Edmond Hamilton as the inventor of the galactic civilization, the idea that humans are just one member of many races who exist through many star systems throughout the galaxy. (Before this, most SF – think Verne and Wells – were limited to the planets in our solar system.)

Wollheim then identifies Isaac Asimov, specifically his Foundation stories/novels, as crystallizing the cosmogony Wollheim now outlines. Wollheim repeats a theme that earlier writers were bound by a ‘mechanistic’ view of the universe, without any appreciation for psychology, sociology, or economics, much as Marxism did.

Following chapters discuss various writers of the ‘50s and ‘60s in that context. A.E. van Vogt imagines godlike characters, with a belief in humanity that verges on megalomania, which Wollheim doesn’t entirely dismiss. Wollheim discusses some specific novels by Philip Jose Farmer – the ones that support his thesis – about the “makers of universes” – and here incidentally, mentions that, as a publisher, he’s noticed that novels that challenge traditional religious dogma [in the late 1960s] don’t get the kind of reader flack that would have happened a decade before. By the same token, the religiously informed novels of C.S. Lewis seem to him, at this point, “painfully dated”. The idea of God, the creation of the universe, is now a valid subject for science fiction [again, as of 1971 or so].

At the same time, in this chapter and following, Wollheim expresses a concern, even an alarm, about what’s happening in then current society – he discusses the current ‘crisis’ (p52.3) and ‘troubled times’ (p53.3) and even implies that the lack of objections to religious verities is a *bad* thing…

Wollheim identifies three barriers to his vision of an expansive future – pollution, overpopulation, and The Bomb – and goes on to discuss various other SF writers in the context of how they addressed these issues, as opposed to envisioning the galaxy-populating expansion of humanity. He discusses catastrophe novels, in particular expressing alarm about the generation of young readers who must have grown up having read Andre Norton’s novel Daybreak: 2250 AD [a book Wollheim published himself] since it was first published in the early ‘50s. He discusses Kingsley Amis’ book New Maps of Hell; he considers Kurt Vonnegut, Jr.; he considers John W. Campbell’s career as a pattern of luck (he attracted the first generation of SF authors who’d grown up with SF, and so assumed a life of editorship at exactly the right time) and failed aspirations (his attraction to pseudo-science from Dianetics to ‘psi’ and then later to various political issues), and then addresses the crises among the Wellsians: how Kornbluth was bitter and cynical; how Sheckley was despairing but funny; how Delany never lost faith in art, song, and beauty.

He returns to writers who support his optimistic, galaxy-expansive vision: Simak, Chandler, Cordwainer Smith; considers Poul Anderson on the Right, Arthur C. Clarke as being neither Left or Right, but expressing in certain books “faith in man’s immortality”; Bradbury, not really on SF author at all, with his doomsday take on future technology; and finally Robert A. Heinlein, whose mixture of political stances is trumped by attitudes, as in Have Spacesuit Will Travel, that humanity will triumph “or die trying”.

And then the New Wave, a trend that began in the mid 1960s, just a few years before Wollheim wrote this book. The New Wave involved both the structure of fiction – the narrative techniques, adopted from mainstream, experimental, literature – but mostly a renunciation of the assumed dreams of SF about the expansion of humanity into space, into the galaxy. In that era of increased pollution, the threat of overpopulation, and most of all the threat of imminent nuclear doom, the New Wave attracted writers who presumed that the world might end at any moment. And so, in Wollheim’s take, they are dismissed as not being “universe makers”.

Finally among SF writers he considers Harlan Ellison, who breaks all the rules about writing, and whose stories are most often downbeat—but whose stories often express a resolute command to not give up, to find the better future that can be had.

And heroic fantasy: why is Lord of the Rings so popular? [The mass market paperbacks of those novels, from Ballantine, had just appeared in the mid-1960s, and were wildly popular, especially among college students.] Because, Wollheim suggests, they were stories in the fashion of the ancient epics, in which there was no confusion between pure Good and pure Evil. And this popularity, Wollheim, concludes, is evidence for the hope of humanity.

Finally, Wollheim claims that space flight is an essential condition of nature, and describes at length the idea of bacteria on a petri dish. Humanity, filling up the planet, is like that, and must eventually break out of the dish, or Earth. All of us alive today are survivors of all the crises humanity has faced over the past millions of years. And, he concludes, we’re not going to end.