Here is a volume I never knew existed until a couple years ago, when I asked my sister in Simi Valley to let me explore a box of family memorabilia that she had had since our father’s death in January 2001. It seems that I got one box of such memorabilia, and she got another, and it’s only until the past couple years that I’ve explored these in my project to compile family history.

This is called “Bridal Memories.” It’s a padded, gild-edged book much like a high school yearbook. It contains newspaper articles (in their very small town of Cambridge, Illinois) about their marriage, and also handwritten lists of wedding attendees, and, most remarkably it seems to me, a lengthy list, running to 114 items, of wedding gifts received and the dates my mother sent thank you notes. 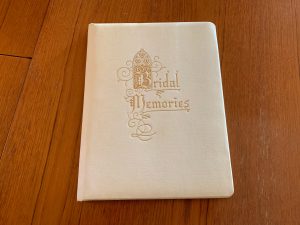 I paged through it and photographed almost every page that wasn’t blank. 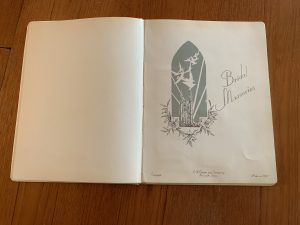 Already we get some interesting details. The handwriting says date (of engagement) January 3, 1953, and “I received my ring April 4, 1953.” The newspaper clippings give the date of the wedding. And they clarify some timing: my father was already in the Air Force, at Rantoul, which is a town about 50 miles southeast of Cambridge. Google Maps indicates a “Chanute Air Force Base (Decommissioned).” It mentions my father did basic training in Texas and was to start weather observers’ school in September. My mother was still a student at U of Illinois at Urbana; my father had been there until joining the Air Force. And they were to be married in a Methodist church. Next page is articles about the wedding, with indications that they would be living in Champaign, just 10 or 15 miles southwest of Rantoul. Note details of the dress, of who assisted in the wedding, and so on. Family trees, on both sides. 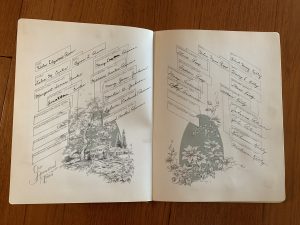 Invitations to the bridal shower. There’s a page I didn’t photograph listing who (Grandma Kelly, Aunt Maude, etc.) was assigned to bring which items to the shower, which was held July 12, 1953. 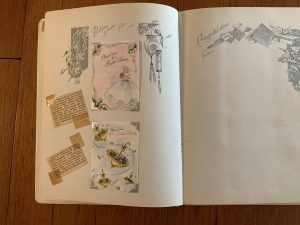 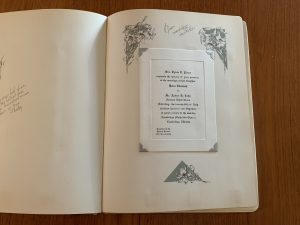 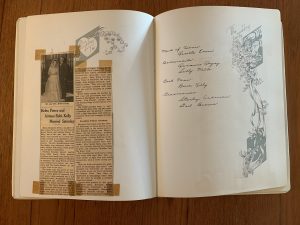 A certification of marriage, with signatures of two witnesses. 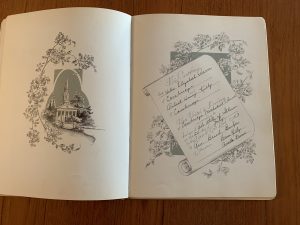 First two of almost three pages of guests. From Cambridge and nearby towns. 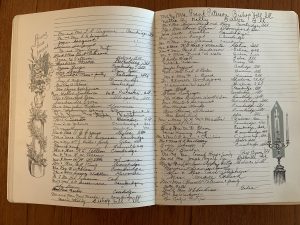 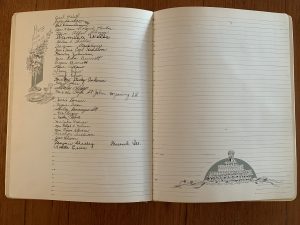 On a page I didn’t photograph is written their address: 605 1/2 South Neil, Champaign, Ill. There’s a dry cleaner there now, it seems.

This is the most impressive section of a book: a listing, in my mother’s handwriting, of 110 or so wedding gifts, who each was from, and when she wrote a note of thank you. The wedding was the 25th of July, so some of the gifts were received and acknowledge before the wedding. The following dates run into October. Next is a smaller volume, hardcover, wrapped in thin vellum paper (which I’ve pulled back in the first photo), title “Our Wedding.” It appears to be the script for the wedding ceremony, with blanks for filling in names of the principles, the witnesses, and bridal party. Other than that there’s nothing personal, so I’ve saved these at somewhat less resolution than those above. Numerous pages that are blank, or that are script with no personalization, I’ve left out. 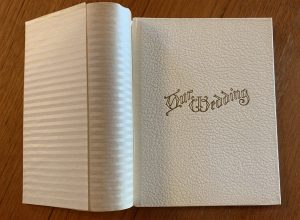 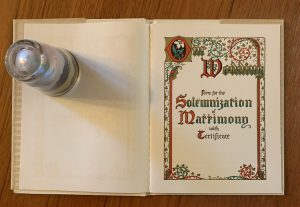 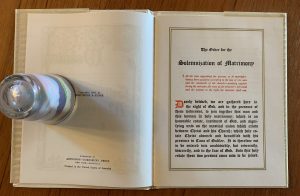 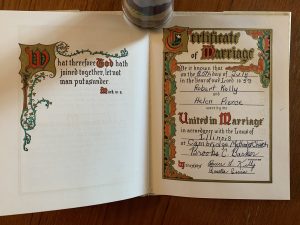