Ehrman, JESUS BEFORE THE GOSPELS: Memories, Stories, and the Gospels 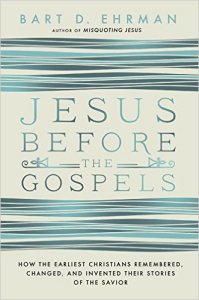 I’ve read eight or ten books in recent weeks that I haven’t yet blogged about here (including three SF novels), but I plan to catch up. First, mentioned earlier as remarkably coincidental considering my recent Bible reading, is a new book by Bart D. Ehrman, a prolific Bible scholar with several books that seem to deconstruct, if not actually discredit, common Biblical narratives — books with titles like Jesus, Interrupted: Revealing the Hidden Contradictions in the Bible (And Why We Don’t Know About Them) and Misquoting Jesus: The Story Behind Who Changed the Bible and Why. Without having read those, my guess is, from what I have read by him, he’s engaging in close reading of the Bible in various translations, of contemporary manuscripts that didn’t make it into the Bible, and so on, to bolster his thesis that, while Jesus was likely a real person in history, he didn’t believe himself to be a Messiah, and it was only later storytellers, apostles, and the church, who made him so.

With this new book, just published in March, Ehrman seems to have discovered a new tool (tempting to say ‘toy’) he can use to explore the Bible and deduce which parts are fancy and which might have basis in fact. His new tool is one familiar to skeptics and psychologists and anyone who understands that ancient history needs to be taken with at least a grain of salt: the fallibility of memory. As is commonly known, the New Testament gospels were written decades after the events that are supposed to describe, so one necessarily wonders, how accurate were those accounts, given that they were told orally across those decades, even if originally based on supposed witnesses to the resurrection? And how is it that, even after decades of presumably being able to compare notes, did the four gospels turn out so differently, with many portions similar but other incidents, like the virgin birth, completely absent from some? (Paul the writer of NT epistles never mentions the virgin birth, hmm.)

While I found this book very interesting, it was also annoying: Ehrman uses his new idea to a fault, shoehorning anything he can into the idea of flawed “memories”, in many cases where I think what he means is how stories, told and retold over generations, succumb to motivations of the human bias toward *narrative*, never mind whether these are matters of any kind of *memory*. He conflates all these matters into that one idea.

He acknowledges this, p11.7, “We all know from personal experience how much news stories get changed in the retelling…”, but then goes on to discuss these issues as matters of memory.

A fascinating aspect of this book (which I presume he’s covered in other books) is his discussion of those other manuscripts that didn’t make it into the official Bible (when it was finalized in, when, the 300s?) E.g. a Proto-Gospel of James; an Infancy Gospel of Thomas (addressing Jesus’ life from ages 5-12); the Gospel of Thomas discovered in 1945, with a collection of 114 sayings. He treats these as rival “memories” when, it seems to me, this are rival *stories*, versions of stories told and retold over decades, then finally selected or discarded for consistency or usefulness by the church officials who finalized the NT.

To give the book credit, Ehrman does explore the plausibility of whether stories can be transmitted orally across generations, with evidence of such modern day practices that do not, in fact, maintain story integrity; how eyewitness testimony (even if you believe the first story-tellers) has been shown not to be accurate in most cases; and then the contemporary study of memory, and how it is often unreliable.

Also interesting: how long it took for the four canonical gospels to be finalized, and given names — not until 185 AD/CE, and only four were chosen, out of all those available, on numerological grounds!

And Ehrman examines several specific stories from the gospels to suggest how implausible they are on their face — e.g. Jesus’ commotion in the temple market, in a temple that was *huge* and not so easily disrupted; about the descriptions of the trial before Pilate, that shift gradually to absolve him and place the blame on the Jews; how Jesus could possibly have told his Sermon on the Mount to such a large crowd, outside on a hill (with no megaphone), and who took notes? — but discusses why the stories might have later been told the way they were. (Again, not about *memory* per se.) And he notes, as I’ve mentioned in my posts about reading the NT, even if these stories are true, who witnessed them?, that they would later be told to the gospel writers.

He cites interesting examples of modern day primitive tribes who tell oral stories, and how their stories are told differently depending on context, the audience, and so on. Which is to say — they have entirely different ideas of ‘tradition’ than we do.

There’s more, more about divergences among the gospels, and the gospels that didn’t make it in to the NT, including disputes about whether Jesus was human, whether there were two gods, etc. etc., and how it wasn’t until the Council of Nicea, in 325 (!), that the ‘church’ settled on a proper theological stance amidst all these competing ideas. Or as Ehrman would say, ‘memories.’

My general reaction is that all this elaborates what I’ve assumed is obvious, to anyone who thinks about the matter at all (and not blinkered by childhood inculcation and thus unable to think critically): that ancient holy books cannot be counted on to be accurate histories, accurate accounts of the truth of the history of the world, let alone reliable accounts about miraculous events that happen to privilege the tribe or cult promoting these accounts, on any number of grounds. They are fascinating in an archaeological sense, as remnants of primitive humanity, and reveal more about human psychology than they do anything about actual history or the nature of the real world.

This entry was posted in Bible, Religion. Bookmark the permalink.