James A. Lindsay on the Obsolescence of Theism

Two posts today, both about slender trade paperbacks of the genre that includes, earlier reviewed, John Loftus’s THE OUTSIDER TEST FOR FAITH (review) and titles by Greta Christina, Adam Lee, and Peter Boghossian (links to those reviews in that review): books published by Prometheus, or Pitchstone, or occasionally self-published, that appeal to the niche crowd of readers focused on atheism and related matters. For me to focus on such books might suggest that my convictions — er, provisional conclusions — are wavering, or need defending, but neither is the case. Rather, much like theism itself (a subject that consists of endless commentaries about itself, and in defense of any input from the actual real world), the ideas around atheism and what meaning in life means, without supernatural dictates, consists of interplay between various thinkers, as well as — quite unlike theism — reaction to continued new understanding about the real world. 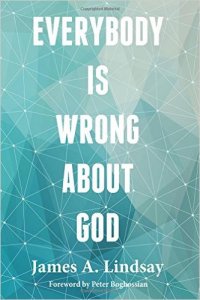 James Lindsay’s Everybody Is Wrong About God (Pitchstone, Dec. 2015), came to my attention, IIRC, via an Amazon suggestion, and the title was certainly provocative. Wrong how? Glancing through the notes for each chapter [there is no index, or bibliography] was encouraging — Lindsay has read his Jonathan Haidt, his Sam Harris; which is what I mean by thinkers in dialogue with other thinkers.

One key theme is in the back cover description: “theism has been so thoroughly and utterly discredited — philosophically, sociologically, and scientifically — that it no longer warrants serious consideration”.

And this certainly strikes a chord. No matter how many believers there might be among the general population, the concept of ‘theism’ plays no part in any intellectual enterprise of mankind — not since Laplace’s famous if perhaps apocryphal “I have no need of that hypothesis”. No course study at university in physics or biology or cosmology, or any topic that studies the natural world, makes the slightest accommodation to concepts from theism. (Though I recall a biology class I took at UCLA where the instructor apologized in advance to any topics that might offend any student’s religious sensibilities.) As far as the scientific and technology advancement of mankind is the issue, theism is irrelevant.

And, of course, where theism is relevant, it is only among many communities of mutually contradictory belief systems.

Lindsay’s premise is in part that, since theism is mythology, atheism is senseless; we should stop using the term, change the conversation.

Lindsay makes the disctinction between “God” — the idea, or cluster of ideas, that people think of when they use the word, and God, the literal supernatural being. By “God” most people mean a set of moral values, which is why the idea of atheism repels them, and makes them distrust atheists. He spends a substantial portion of the book exploring these moral attributes of “God”, where different ideas are like different settings on a mixer board, where the master volume knob is ‘transcendence’, which for some is turned all the way up, equating with faith, that which cannot be questioned.

And then: fill the religion gap. Promote humanism. For purpose: Find fulfilling work, focus on the here and the now, make other people happy, cope with the reality of death. (Which leads to Dan Barker’s book, next.)

Go post-theistic: promote education — especially on the internet — on such topics as comparative religion, ethics, logic, critical thinking, civics. (Trying to change school/universities is too political and slow to change.)

[[ My thought here is that much of this is simply the result, in the long long run, of the interconnectedness of groups around the world who were previously isolated, coming into contact; leading to panic and paranoia of those frightening of change or whose insupportable worldviews are challenged. ]]

At the end, I endorse the author’s position: when discussing humanity’s understanding of its place in the universe, and its potential futures, theism — all religious ideas– can be ignored (except in the context, perhaps, of how humanity might divide and destroy itself). Yet I have to say that the book, at only 240 pages, is repetitious and long-winded. The issues aren’t that complicated. I was hoping for a crisp suggestion of how non-theistic thinkers might describe themselves without using the word ‘atheist’; his answer is basically, just don’t bring up the topic. (Which suggests the analogy to stamp collectors — those who are not don’t feel the need to describe themselves as ‘non-stamp-collectors’, and the same dismissal should apply to people who are not believers, theists.)

This entry was posted in Atheism, Religion. Bookmark the permalink.