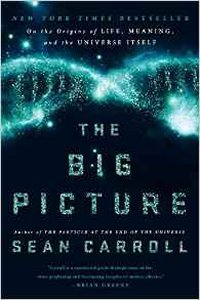 Sean Carroll’s THE BIG PICTURE: On the Origins of Life, Meaning, and the Universe Itself, just published May 10th, is an ambitious, wide-ranging book not so much about cosmology (Carroll’s specialty at CalTech), as about the perspective we gain through cosmology and science in how we view our world and our place in it. Briefly, it’s about how to understand the universe and ourselves in purely materialistic, non-supernatural, terms, and how that’s OK.

The book is divided into six sections — Cosmos, Understanding, Essence, Complexity, Thinking, and Caring — and among those a total of 50 chapters, in about 430 pages of text (so the chapters are relatively short).

The first part defines Carroll’s idea of ‘poetic naturalism’, by which he means that while the world can be understood in purely naturalistic terms, we can use different kinds of ‘stories’ to describe the world at different levels of complexity. He summarizes these on page 20:

The implications of this approach are straightforward. Yes, everything ultimately boils down to physics, but it makes little sense to speak of biological systems, for example, in terms of general relatively, quantum mechanics, and the Higgs boson. This strategy lets him, for example, discuss the notion of free will, which commentators in recent years (e.g. Sam Harris) almost gleefully like to claim does not exist in the intuitive sense most people share. Maybe so, Carroll says, but those insights are academic; there are still useful reasons to entertain the notion of free will when it comes to discussing human decisions and responsibilities.

I don’t think I’ll outline the entire book the way I often do in this blog, because the author has already done it for me, on *his* blog. But I will add a few words of description for each section.

Note 1: Carroll wonders, for example, whether evil, or the absence of evil, would affect the argument for the existence of God, in a Bayesian way. Moreover, it’s easy to imagine other worlds that would better support theism, p147.6: a world where miracles happen frequently; in which all religious traditions around the world come up with the same doctrines; a world in which the world is small, just Earth and the stars above; a world in which religious texts provided nonintuitive scientific information; a world in which humans were apart from the biology of all other creatures; a world in which souls obviously survived after death and communicated with living; a world of the just.

And here is how such ideas inform the thesis of my own contemplated book about science fiction and its intersection with science and naturalism: science fiction supplies grist for the Bayesian mill. Science fiction supplies endless examples of how the universe might be, or could be, different, that undermine the assumptions most people make about the nature of the reality and the presumptions that humans (and the American way of life!) are ordained by some god.

Note 2: Carroll asks, what did theism actually predict about the nature of the universe? A Hebrew dome, a patch of land surrounded by water.

On a related point, the fine-tuning argument keys off the supposed suitability of the universe to support life. This argument would be more persuasive if the universe really were just a patch of land surrounded by a dome of water. In fact, the universe is enormous, really really enormous, and only the most infinitismal portion of it, so far as we can tell, is suitable for life.

I’ll go ahead and list his ‘Ten Considerations’, with (glosses) and [a comment or two of my own].

The final chapter of the book recounts the author’s childhood churchgoing experience (mine was very similar) and a couple key incidents that triggered his doubt. (Mine were similarly incidental, yet crucial.) Why he prefers wonder over awe. How the universe is intelligible.

Poetic naturalism offers a rich and rewarding way to apprehend the world, but it’s a philosophy that calls for a bit of fortitude, a willingness to discard what isn’t working…

Facing up to reality can make us feel the need for some existential therapy. We are floating in a purposeless cosmos, confronting the inevitability of death, wondering what any of it means. But we’re only adrift if we choose to be. Humanity is graduating into adulthood, leaving behind the comfortable protocols of its childhood upbringing and being forced to fend for itself. It’s intimidating and wearying, but the victories are all the more sweet.

In summary, this is a book with many familiar ideas from my reading of other books, but which is valuable for assembling them all into one place, and placing them into a coherent, even inspiring, framework, about a non-supernatural understanding of the universe our species lives in. The future of humanity, if we survive, is to acknowledge the reality of our universe, giving up primitive, childish myths that privilege one tribe over another. As an overview of many ideas in a naturalistic framework, as a capture of the best thinking by one of the best science writers on the planet, this is a top shelf book, and highly recommended.