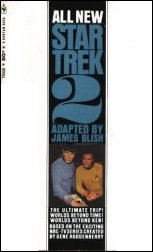 Blish’s second book of episode adaptations was published in February 1968, just past the half-way point in the production of the show’s second season, even as all the scripts in this book are, as in the first book, from the show’s first season. As with the first book, the adaptations are moderately short, with 8 of them filling out a book of just 122 pages.

And as in the first book, Blish’s narratives follow Kirk’s point of view, so any scenes from the original scripts that dealt with other characters, when Kirk wasn’t in the room, are automatically omitted, or at best summarized in some fashion.

As with the Blish’s own writing, the publisher’s descriptions, especially on the first page inside the front cover, indicate that whoever wrote them had either never seen the show, or had not paid close attention. The inside front cover describes the three main characters: Kirk, Spock, and … Uhura! The last is described as: “Easily the most popular member of the crew, the truly ‘out-of-this-world’ female has drawn the important assignment of scan engineer on her first mission in deep space.” Scan engineer?

Once more, I’ve mentioned in previous posts concerning Blish’s Trek books that for years I’ve felt he did several of the shows some notable improvement, smoothing out infelicities of the plots and providing justification for some stories’ more outrageous gimmicks. But Cushman’s books, especially now his second book (https://www.amazon.com/Star-Trek-These-Voyages-Season/dp/0989238148/), confirm that most of the differences between the broadcast episodes and Blish’s short story version were due to Blish being send draft scripts that were not final. The best such case is one of the stories in this book. Even so, some changes were surely Blish’s own contributions, as I try to note here.

“A Taste of Armageddon”

“The City on the Edge of Forever”

(All these posts turn out much longer than I’d thought they’d be.)