Notes on Trek music, Season One

The essence of Star Trek’s music was that it was composed of many themes that recurred across many episodes throughout the series, sometimes in variation, sometimes not, in ways that made the series’ music a sort of extended symphony-cycle of recurring leitmotifs, rather than a set of themes tied to particular episodes, the way film scores are. The themes ranged from grandiose action-adventure music, to questing nautically-flavored tunes, to eerie and colorful music suited for the adventures of the Enterprise on strange planets and meeting new civilizations.

Ironically, this effect of a broad set of themes that unified two and half dozen episodes – considering in this post only Trek TOS’s first season – was created not by some grand master plan to unify the show in this way, but inadvertently as a consequence of musician union rules at the time. Those rules required a TV series like Trek to spend a certain number of hours in a studio recording music for each season’s shows, but otherwise allowed the show’s producers to reuse that music as often as they liked, at least within the same season.

Thus, original music was written only for a minority of episodes, generally episodes produced early in the season. Later episodes reused or ‘tracked’ the earlier music as appropriate, no matter which composer had originally written each track, or for which episode. It was up to the show’s music editor to compile a ‘library’ of tracks from the original scores, and then to select from this library appropriate music for later episodes, scene by scene. Individual tracks in this library were often quite short, some only a few seconds long; dozens of such tracks would be strung together to fill out the score for a ‘tracked’ episode. 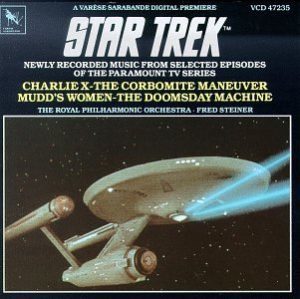 There have been selected releases of Trek scores for decades, beginning in the late 1980s, when Varese Sarabande released, initially on LP, two discs of newly recorded music from a total of eight episodes. You can tell that the music is from the original scores — rather than arranged suites, say — and the music was performed by the Royal Philharmonic Orchestra, under the direction of Fred Steiner, one of Trek’s key composers, the single most prolific composer by episode count, in fact. The first album (https://www.amazon.com/Star-Trek-Recorded-Paramount-Corbomite/dp/B00000153T/) included Steiner’s own music for “Charlie X,” “The Corbomite Maneuver,” and “Mudd’s Women,” plus Sol Kaplan’s music for “The Doomsday Machine”; the second, Steiner’s music for “By Any Other Name” and “Mirror, Mirror,” Jerry Fielding’s for “The Trouble with Tribbles,” and George Duning’s for “The Empath.” Steiner, in these re-recordings, takes his time with music originally written to fit carefully edited and timed scenes; e.g. in “The Corbomite Maneuver,” the “Baby Balok” theme is noticeably slower than in the original soundtrack, as is the big statement of the main “Fesarius” theme. In these recordings Steiner lingers over themes in ways that are often effective, but sometimes distracting considering what we remember and have listened to over and over again for decades.

Then in the early ‘90s Crescendo released three albums of remastered original soundtrack music. Each album contained scores from two episodes: the two pilots on the first, “The Doomsday Machine” (the full score, not the under 6-minute selections on the Fred Steiner album) and Gerald Fried’s “Amok Time” on the second; Fried’s “Shore Leave” and Alexander Courage’s “The Naked Time” on the third. 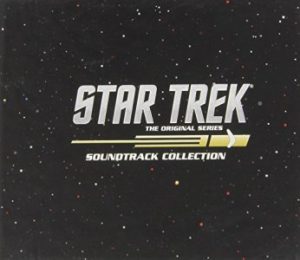 With my recent ambition to rewatch the series, I recalled the ambitious soundtrack set of Trek music issued of La-La Land Records a year or so ago– http://www.lalalandrecords.com/Site/STTOS.html. This is the ultimate soundtrack collection, a gathering of every track recorded for the show, even some that weren’t used, with annotations that include the exact dates upon which each set of tracks was recorded. It’s a boxed set of three fold-open plastic cases holding a total of 15 CDs. It’s not cheap — $225 – but I sprung for it, and it’s finally enabled me to appreciate not only which music was written originally for which episodes, but how that music developed and built on earlier scores by the entire set of Trek composers. And so for this consideration of Trek’s music, I’m focusing on this primary set of original recordings, not on the later re-recordings by Fred Steiner, or the earlier Crescendo soundtrack releases.

The liner notes for the La-La Lands CD set are by Jeff Bond, who published a book back in 1999, The Music of Star Trek (https://www.amazon.com/Music-Star-Trek-Jeff-Bond/dp/1580650120/), that covered TOS (The Original Series), several of the movies, and three of the later series to a lesser extent. So I tracked down that book also and bought a copy. 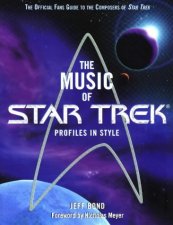 To go into further detail, as explained in Bond’s book: the reason producers could get away with generating only a certain amount of music, and then reusing that music in later episodes, is because that was allowed by musician’s union rules at the time. Bond gives some detail via an article by Fred Steiner (pp34-35 in his book). Rules at the time required a one-hour dramatic show of, say, 26 episodes over a year, to spend at least 39 hours in the studio recording music. Further, a typical episode score might run anywhere from 10 to 30 minutes, but a single scoring session could record only some 4 or 5 minutes of music per hour in the studio. Arithmetic leads to the conclusion that such a series would need to fully score only eight episodes. Trek’s first season had 29 episodes, and scored 13 of them, though several only with shorter “partial” scores.

All that changed in the early 1980s, when union rules changed to prohibit such reuse, requiring new music for every single episode. Thus Trek Next Generation has a unique score for every episode.

One twist of the original 1960s-era rules was that music could not be reused from one season to the next, unless the music was re-recorded (so musicians would be re-paid). That’s why, for example, the main Trek theme over the show’s opening credits sounds a little different from season to season. (I noticed this effect at the time, or at least in the ‘70s, when long-running TV shows would have essentially the same theme music from year to year, but you could tell that the themes weren’t exactly the same – there were often slight changes in instrumentation, or intonation, or phrasing. I noticed that especially about Hawaii Five-O back in the ‘70s when I watched that show regularly, and its iconic main theme was slightly different from year to year.) And Trek did that too, thus preserving some of Alexander Courage’s and Fred Steiner’s earliest themes all the way through the show’s second and third seasons.

In each of Trek’s three seasons, therefore, the majority of scored episodes came at the beginning, until enough music had accumulated to constitute a library of tracks for reuse that season. There was an irony about writing music to be suitable for a particular episode, while being generic enough to be re-usable; a theme too specific to a situation might perhaps never be used again. An example might be Riley’s jig in “The Naked Time.”

Another technical bit: almost every episode has a “music by” credit in the end credits, to a single composer, often Alexander Courage, since so many of the show’s earliest themes were by him. Even the episodes without original scores had “music by” credits. So what did that credit mean? It meant that, for a ‘tracked’ episode, the music editors would have compiled an elaborate tracking sheet, listing the length in seconds of each track and who composed it (Courage, Steiner, Kaplan, etc.), and then whichever composer was responsible for the majority of the music tracked when the episode was done, even if only by the slimmest margin, e.g. 51%, was awarded the “music by” credit at the end. You can understand how most of those credits were misleading, because all of the tracked episodes actually contained music by several composers.

Here’s a list of the originally-scored first season episodes, with composers, where the numbers indicate production order. Episodes not listed were ‘tracked’ from the scores for these 13. (There were also a few miscellaneous separate ‘library music’ tracks done by a couple composers, rescoring other composers’ themes or scoring original mood bits for generic use, recorded as time permitted during sessions when original scores were recorded. They are included as a separate group on the La-La Land Records CD set.)

Note first of all that the shows were not aired in production order; e.g. “The Man Trap,” the fourth episode in regular production (after the two pilots), was the first ever Trek episode broadcast, in September 1966. To further complicate matters, however, the scores for these episodes were not composed in the order of the filmed production. That’s because the scoring was often one of the last things done during the post-production (i.e. after filming) of any episode; ideally, the composer would work from a nearly-finished show, completely edited and with special effects added in. But some episodes took much longer to get through post-production than others. “The Corbomite Maneuver,” for example, had heavy FX (special effects) of the alien spaceships, and took so long to complete that it was the 10th episode broadcast, not the 2nd.

The La-La Land CD set arranges the episodes more or less, but not exactly, in broadcast order – the order is altered a bit to fit on the CDs without splitting any one episode across discs.

But to appreciate which music was written originally for which episode, and to see how themes were reused or redeveloped by later composers, you need to listen to the scores in order of their recording (which even then doesn’t necessarily reflect the order of composition!) of that music. Fortunately, this La-La Land CD set has extensive booklet notes, listing track names and timings, names of performers at each recording session – and the exact date of each recording session. (Notable because in one case, relatively short scores for three separate episodes were recorded on the same day!) (Cushman’s books, too, as they nail down exact dates of every script draft and of filming and post-production, notes dates when original scores were recorded for episodes that got them.)

My notes here list the episodes in that recording order, with those dates noted in bold. As I go through these scores, I’ll give notable themes, especially those I know will recur, name tags for future reference, in bold. I should note that the scoring sheets and CD track listings use rather informal names or descriptions, some rather irreverent (e.g. “Zap Janice” for when Charlie makes Janice disappear, in “Charlie X”). I’ll try to use slightly more formal names.

“The Cage”, by Alexander Courage

“Where No Man Has Gone Before”, by Alexander Courage

“The Man Trap”, by Alexander Courage

“The Naked Time”, by Alexander Courage

“The Enemy Within”, by Sol Kaplan

“The Corbomite Maneuver”, by Fred Steiner

“Balance of Terror”, by Fred Steiner

“What Are Little Girls Made Of?”, by Fred Steiner

“The Conscience of the King”, by Joseph Mullendore

“The City on the Edge of Forever”, by Fred Steiner