Models, of Cars and Spaceships

At some point at around age 10 or 11 I developed an interest in building model kits, especially of cars. (I’d always had a fascination with cars. In the early ‘60s, when I was 7 or 8 years old, I paid such close attention to various makes of car that, as we drove down the highway, I would call out the identification of each car passing by: Buick. Ford. Mercury. Dodge. Rambler. And so on. For a couple years my father took me around to all the car dealerships (in Victorville), in the Fall when the new models came out, to see the showroom models but especially to collect the new model pamphlets, at the time freely given away. I need to specify that I liked cars not because I wanted to race them or anything like that; I liked them for their designs, how they changed from year to year; I liked them aesthetically.) 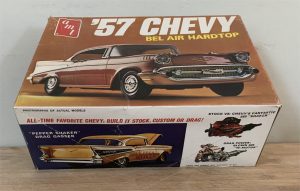 I’m not sure what triggered my interest in building plastic models. It may have simply been an outgrowth of my interest in toy cars (see 1962 family pics). It might have been Star Trek, and the availability of AMT models of the Enterprise, by early 1967. In any case I developed an interest in building model car kits, but only those released by AMT, as opposed to those from Revell or Monogram, which were more typically “replicas” and not exact to-scale models; the replicas had obviously visible weird distortions of proportion and detail. Early on I became brand conscious, as I would years later about books from particular publishers. AMT kits typically offered three version of each car: stock, race, or custom. The custom options reflected actual activity in Hollywood, where Hollywood stars would have their cars “customized” to look distinct – this was decades before the availability of exotic European cars like BMWs or Mercedes. 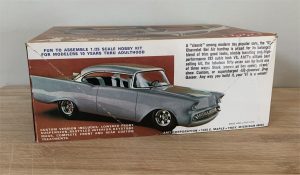 The most famous customizer was George Barris, https://en.wikipedia.org/wiki/George_Barris_(auto_customizer), who would modify, one by one for his wealthy clients, stock cars by remolding the body or welding grilles and bumpers taken other cars. (The photos show the three ways you could build a ’57 Chevy Bel Air: stock, drag, or custom.)

I was fascinated by these—by the custom modifications. They appealed to my taste for the strange and the weird. And so I built all these model cars, usually the custom version, using the plain white plastic parts. I never painted them, as hobbyists usually did. My father didn’t understand. I wasn’t trying to create miniature versions of real cars; I was fascinated by the alternative shapes. 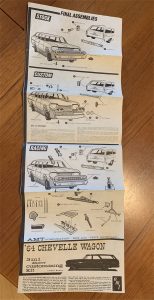 (The model companies like AMT, Revell, and Monogram did not, of course, create kits for every make and model of car. So it was quite a coincidence that one of AMT’s kits was of the exact car my father owned — a 1964 Chevelle station wagon. The final side of the instructions shows the bizarre grill and headlights used for the custom version, with some notes in tiny print about the actual designer, Bill Cushenberry.)

I must have built a dozen such kits, and at least one Enterprise model, by the time we moved from Reseda to Illinois. My father, typically, unilaterally, declared that we could not afford to pack up and move all my models. (Even though his company was paying for the move, presumably.) So I gave them away, and since I had no friends, they went to Linda Bigbee, oldest daughter of long-time family friends in Burbank. She probably tossed them. Once in Cambridge, and then Glen Ellyn, I did one or two more car models, then moved on to more Enterprise and Klingon spaceship models, and then to detailed models of the Gemini spacecraft, a large Apollo/LEM model, and the huge Saturn V stack. My father disapproved (as he did about so many things) of car models, so I built a battleship model (Prinz Eugen), an aircraft carrier model (Enterprise), and a large detailed model of some kind of WWII plane, which I never finished.