Links and Comments: Graphics and Lists

In thinking about Andrew Sullivan’s old Daily Dish blog, a few posts ago, I dug into my archive directories and found text file saves of bookmarks from various old computers, as far back as 2008, including one from my work PC in 2014 (when I was still contracting). They accumulate differently and never match (just as well) and I was startled by how many bookmarks there were for sites I found regularly interesting and followed sometimes for years, before letting it them fall away. There are, after all, only so many hours in the day.

Among those old bookmarks were a few rather cheeky ones on religion and pseudoscience, which I don’t think I’ve linked anywhere on this site before. But let’s start with one I saw just today on Facebook, partly because I’m wondering if WordPress here will display the image if I simply enter its URL:

History of Religion (by Paul Kinsella)

I guess it does display it! This is, as it says, from a cartoonist named Paul Kinsella, who doesn’t seem to have a personal site, except for his Facebook page. Another, one-panel, cartoon, seen while Googling:

Which brings us to this refound link from an old bookmarks page: Gods We Don’t Believe In.

You can click to the webpage, but for consistency in this post I’ll show part of it as an image: 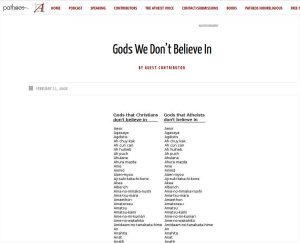 The full lists are quite long (12 page-down screens on my laptop) of the names of various ancient and current gods from every religion imaginable. The two columns are exactly the same except that the right one has one more name at the bottom: Yahweh. (I wish I could find a better-sourced such list — there are, of course, lists of various ancient gods on Wikipedia — but the point is valid nonetheless.)

My thought about this issue has always been that if the question is, do you believe in God?, the answer isn’t yes or no, it’s, which one? Or perhaps the question should be, who’s your favorite god, and why? The Old Testament is frankly polytheistic. “Thou shalt have no other gods before me” not “Pay no attention to those false gods worshiped by other tribes…”; the commandment presumes that the gods of other tribes are as real as the god who supposedly issued the commandment. Remnants of polytheism lie in the Catholic church’s over 10,000 saints (https://en.wikipedia.org/wiki/List_of_saints), one for every subject imaginable it seems, echoing the Greek and Roman pantheons of specialty gods; and for that matter the Christian god who is really three gods but actually one. (Not to mention all these angels and demons that many Christians apparently believe in.)

I imagine the impatient Christian would say, but I believe in the *one true God,* the same one all believers believe in, even if their religious practices vary. We’re all worshiping the same true god.

And my response is yet another bookmark that I saved years ago: The Dummy’s Guide to the One True God. 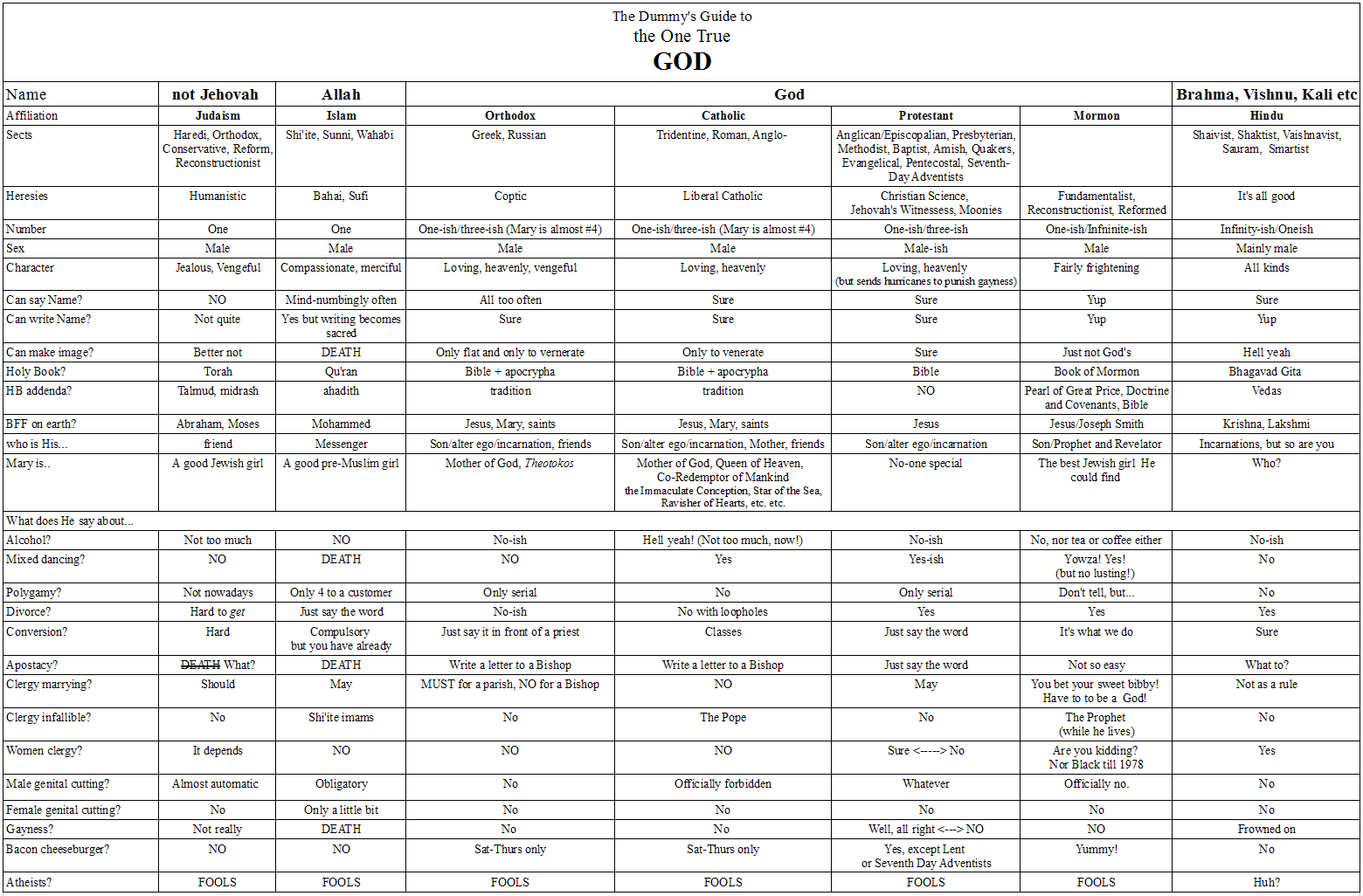 From here you can right-click (on a PC) to “view image” and see it full screen. Again, I don’t have an original source for this; it was linked from some blog I was reading in 2012, without a credit to the original author. The point is valid nonetheless: they’re obviously *not* all the same. This is the primary point of Stephen Prothero’s book God Is Not One.

Finally, to expand the scope from religion, here’s “The Venn Diagram of Irrational Nonsense”: 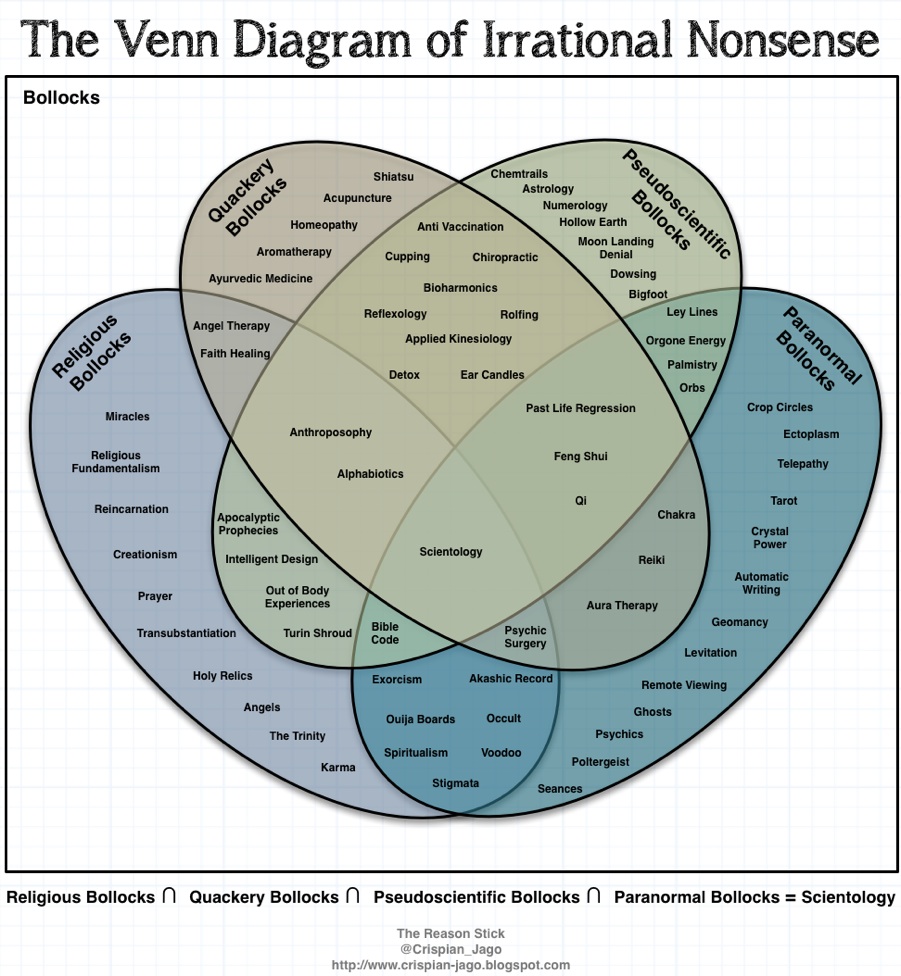 Again, right-click to view image full-sized. It originally appeared here, on a prototypical “some guy on the web” blog, inactive for a year now, but nevertheless makes a couple valid points. I’m not particularly interested in the accuracy of his Venn overlaps. The main point is that the scope and extent of human belief in things that are psychologically appealing but have no verifiable basis is vast. And second point, much as in the world of conspiracy theories, is that followers of one of these beliefs, including the religious ones, would likely be indignant to be included on a chart with all those other obviously nonsensical beliefs. And the others all feel the same about them.

This entry was posted in Lunacy, Religion. Bookmark the permalink.