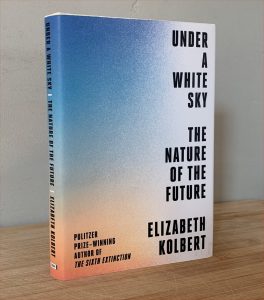 This modestly-length book is a sequel of sorts to the author’s The Sixth Extinction (2014), which won a Pulitzer Prize and which I greatly admired. (My review here.) That book was about how the human impact on the planet, especially in recent centuries, is bringing about a mass extinction of species on Earth, comparable to the five earlier ones seen in the fossil record, including the one that killed the dinosaurs.

This new book is similar in style but with a more specific theme. Again, each chapter focuses on a specific circumstance of how an ecology or species has been affected by human activity, with the author visiting remote places and interviewing key people. And again, some of these chapters likely appeared as long essays in The New Yorker or elsewhere. The more specific theme is this: how humans have made messes of things, and how only smarter human action can repair them. What’s needed is more control, not less; there’s no sitting back and letting the Earth repair itself. Each chapter discusses a specific example. Only toward the end does the book address possible remedies to the large problem of climate change, which is where the title of the book comes in.

I’ve bolded some key words and passage for easier skimming…

Section 1: Down the River

Section 2: Into the Wild

The strongest argument for gene editing cane toads, house mice, and ship rats is also the simplest: what’s the alternative? Rejecting such technologies as unnatural isn’t going to bring nature back. The choice is not between what was and what is, but between what is and what will be, which, often enough, is nothing. This is the situation of the Devils Hole pupfish, the Shoshone pupfish, and Pahrump poolfish, of the northern quoll, the Campbell Island teal, and the Tristan albatross. Stick to the strict interpretation of the natural and these—along with thousands of other species—are goners. The issue, at this point, is not whether we’re going to alter nature, but to what end?

Section 3: Up in the Air